On February 25th, 2013 Tacos Lupita Will Be Offering $1 Tacos In Appreciation Of It’s Customers After One Year In Business.

http://www.goodmorninggloucester.com Do you get it? 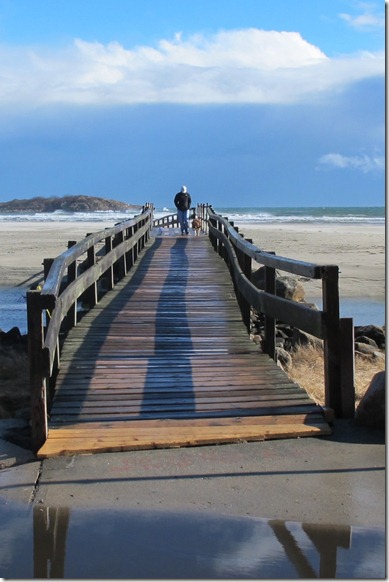 “Your power is turning our darkness to dawn . . .”

From Roll on Columbia by Woody Guthrie.

Here is a couple more pictures of the Boat Show.  The two 300 horse power engines, now that is power.

It is just as pretty in green as it is in white. 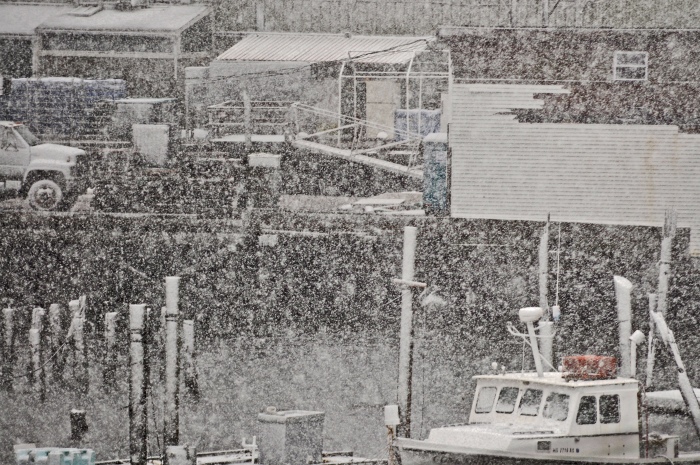 If you come across any old radios (portable or semi portable) that work or don’t work / Tubes or old transistors and you are never going to use them, but hate the idea of throwing it out. Send it my way. I found a great project to convert them into amplifiers for electrical instruments which will go hand in hand with our homemade instrument project. It looks as though I will be presenting this STEM project and the students work this summer at Northeastern University.

Before you say “They can’t use that old thing”, remember that we can use the knobs and inner electronics. The older tube radios have an analog sound that is amazing but the old transistor radios are much more portable both are welcome. So, check the attic and then the cellar and let me know if you find anything or just drop them off at Gloucester High School. Please pass this email on to anyone you think might have some collecting dust. I thank you and my students thank you.

http://www.goodmorninggloucester.com Do you get it?

The narrow strip of land that separates freshwater Niles Pond from the Atlantic Ocean was severely damaged during Blizzicane Nemo. 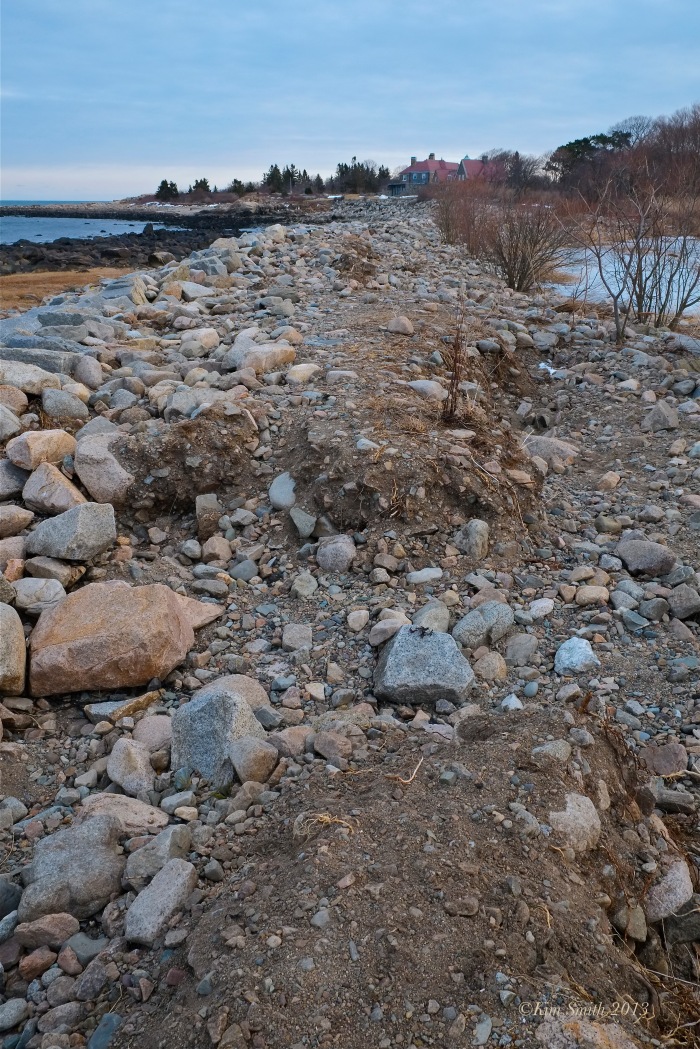 In several places along the footpath, there are cuts clear through the granite dune and a sandy beach is forming on the Niles Pond side. Shrubs, wildflowers, and ground covers that help retain the sides of the causeway have been uprooted and washed away.

Joey’s choice to post Benjamin’s Carson brilliant speech (see this post) reminded me of how much I love a good speech.  It’s like a good song.  Here’s one of my favorites — an equally brilliant speech by Ken Robinson, who asks, at TED conference, “Do schools kill creativity?”  His answer is “We are educated out of creativity.”  This one will make you laugh & wonder just like Dr. Carson’s speech does.  So as we did yesterday, we urge you to watch it to the end — and we urge every parent, student, teacher and most especially the School Committee, Jason Grow & Peter Dolan to watch.  If you really think you don’t have 20 minutes, at least catch his story about world renowned coreographer Gillain Lynne (Cats, Phantom of the Opera, etc.).  It starts at 15:15

After you watch the video, take Sir Ken’s advice and let your kids enjoy some of Cape Ann’s most creative people tonight.  Lots of excellent choices with many of our favorites — all starting early enough to take the kids.  See the complete live music schedule here.

I miss teaching voice and am planning to add one day of teaching (evening hours) around Cape Ann starting in April. Let me know if you are interested, or if you know anyone who might be!! Contact > www.reneedupuismusic.com

Renée Dupuis is a truly versatile vocalist both on stage and in the recording studio.  From conservatory-style classical singing, to music theater, jazz, blues and rock & roll, Renée has enjoyed a diverse musical career excelling as both a solo artist and back-up singer.

This info is from http://www.reneedupuismusic.com/

Buncha stuff to say.
FIRST OFF: Me and Riley have been booking all ages shows in Gloucester Massachusetts, our home town, for a minute now @ this place called The Hive. David Brooks has been helping us out a great deal. This a cool safe place for people of all ages to go and see some great music. That’s not all they do there, it’s really just a small portion of the stuff that they do there. You can check it out! We got a show coming up on March 9th With bands: The BFs, The Young Leaves, The Little Richards, Poison Ivy League, Toys And Other Weapons We keep door prices @ back in the day prices $5 and put the cash back into the space, or it goes to benefit another cause, or afew dollars to gas money for some of the bands. I always feel like it’s important for younger bands to play with older bands from out of town. Perspective is important. It’s been fun. Come by and check it out. If you want to book your band here come talk to me @ Young Leaves / BFs / Poison Ivy League / Mercy Case / Little
Richards / Toys And Other Weapons

Photos taken on Pleasant Street the day after Nemo.

"Credit is the future tense of money"
Ezra Pound

(1885-1972) from Canto
13
Quoted, with thanks, from JoeAnn Hart’s excellent new book Float.
Born in what was then the Idaho Territory to parents of Quaker and Puritan ancestry, Pound was raised in Philadelphia, but rebelled against his genteel surroundings and exiled himself to England to be a poet. Disgusted by the slaughter of the First World War, which he blamed on market capitalism, he spent much of the next twenty-five years in France and Italy. He befriended and championed Eliot, Hemingway, Frost, Joyce and our own Charles Olson, and helped to publish much of their early work. A supporter of Mussolini and Hitler, he made radio broadcasts denigrating the United States during the Second World War, was arrested as a traitor at its conclusion, and spent the next 12 years in an American psychiatric hospital. Meanwhile his poetry continued to be read and appreciated, winning controversial awards and prizes. Finally released in 1958, he returned to Italy publishing the last of his Cantos, 110-118, in 1968.

Submit Your Picks For The Winners of The Top Six Categories

You can go to http://movies.yahoo.com/oscars/pick-em/ and make your selections.

Write in who you picked in these 6 categories in the comment selection below this post.  Be sure to fill out your ballot before the Oscars Telecast tonight.

Of the movies nominated I’ve seen Argo and Django Unchained.  Both must see movies IMO.  I was on the edge of my seat throughout Argo.  Fantastic movie.

Django Unchained, the Quentin Tarantino Directed Movie was a complete spectacle and just like everything else from Tarantino you had no idea where everything was going.  I’d like to see it win but they don’t seem to like to reward Tarantino and I think Argo takes home the honor based on the sympathy vote for Ben Affleck getting the snub in the director category.

I would not at all be surprised to to see Lincoln with though.  I just won’t root for it because I’m just not a fan of period pieces. even though it’s probably a great movie.

I’m going with Jessica Chastain here because once again no one has seen any of the other movies in this category.  Amour, a French sub-titled film.  The Impossible, didn’t hear about it. They say Jennifer Lawrence didn’t have to act much for her role in Silver Linings Playbook.  and Beasts of the Southern Wild, another movie no one has gone to see.  Also Meryl Streep wasn’t nominated in this category.  Because it doesn’t matter when Meryl is in the race Meryl wins.

Another easy category to pick.

I’d rather see Christopher Waltz win for his performance in Django Unchained but I’m picking Tommy Lee Jones.  I figure for the Spielberg movie they’re gonna give a bunch of awards and this is a category where they can give another one.  Alan Arkin was great in Argo but it wasn’t a huge role onscreen.  Philip Seymour Hoffman is great in everything he’s in but I never saw The Master and didn’t hear a lot about it.  Silver Lining Playbook is just a movie that despite all the huge stars in it I never heard anyone say “You Have To Go See This Movie” so that’s why I doubt it goes to Dinero.

I can’t root for Anne Hathaway and her phony humble brag.  Never saw her in anything that blew me away.  Would I be shocked to see Anne Hathaway win it?  No, in fact she probably will but I just root against here every time.

I just think Spielberg doing an important piece with big actors is gonna get votes.  It’s probably a movie I ought to go see but it’s just not my kinda film.  I’m no history buff.  Would have loved to see Quentin Tarantino win for Django Unchained but he wasn’t even nominated.  Also wouldn’t have minded to see Affleck win for Argo.

Gotta be Spielberg for the lock.

Don’t forget to click on the comment below this post to leave your predictions in the top six categories.  You can view the nominees here- http://movies.yahoo.com/oscars/pick-em/

If you haven’t had the chance, listen to Robert Newton’s WGBH radio interview with Edgar B. Herwick III about all things Oscars, Rob’s stellar programming (which includes special events featuring nights with Liv Ullmann or movie launches with luminaries like John Sayles) and of course Rob’s enthusiasm for Gloucester! It’s the lead interview, first 10 minutes.

“Movies are spiritual experience and way of life for me…I’m happy to share my enthusiasm and joy for film…and our refuge sanctuary (here) in Gloucester !”

His annual Oscars night also falls on his birthday this year. Come celebrate: