Photo by Sharon Lowe
Some words from Dave himself,
Well, it was nice to have a week off, but, screw that; let’s get back to work. Jobs! That’s what we musicians need. Without this gig I’d have 10 less dollars a week to squander on foolishness, such as food.  Hope I don’t break a string.
I’ve been bending over backwards (and falling down a lot) to bring you the finest in sustainable egologically sound sound. No misprint, there. Thanx for your continual support. Let’s see what we have for you this time around….
Hmmm, by Jove, I think we got her. Yes, it’s a Done deal: After a long hiatus, let’s welcome back Ms. Diane Blue, Demiurge and Octomom of the Blues. Possibly my favorite frontperson, and a killer harmonicat, to boot. Sings like an angel, walks and talks, too. She’ll be dragging in her entire repertoire for your musical consideration. Make ya wanna dance. Me, I’m leaving the cane home , but I’m bringing my crozier!
Rounding off the ensemble we have the apoplectic Mr. John Hyde, jazz snob and loving husband, on keyboards and demented tri-tones. He just got his beret blocked…somebody  help me. We’re gonna have a shoe-tying contest at first break. Of course Greg T. and myself will be there. Behind the closed curtains will be  Mr. Roger Brocklebank, on skins and concussion, eating his way thru the entire menu. This’ll be a fun time. Wipe your chin and come on down!
On other fronts, I’ve been looking to update and enlarge my email list. Many of the addresses I have don’t work anymore. So, if you think of it, send me updated addresses, or names of friends who might like these mumbly missives. I don’t do FaceBook: I have enough friends who don’t need me to help them waste their time. And thanks to Good Morning Gloucester for printing my weeny rants. See Ya!

The proposed site of Gloucester’s first dog park is an under-utilized, overgrown section of Stage Fort Park. The topography, trees, and location make it an excellent choice to transform this virtually unused 2 acre site into a fantastic recreational area.

· Walking Path Area – on leash area for dogs that do better on leash and for people with strollers and young children.

· Special Needs & Training Area – for dogs not ready for the dog park and need special training and time to adjust. Also an area to hold training, education and adoption events.

Look for the Novena video from The Orlando family tomorrow

Bring Your Unwanted and/or Expired Medications for Safe Disposal

For more info on what to bring / not to bring please visit http://healthygloucester.org/programsevents

The Rocky Neck Gallery, located at 53 Rocky Neck Ave. in Gloucester, is a co-operative gallery run by members of the Rocky Neck Art Colony. A limited amount of space is available for new artists in 2011 for the 19-week summer season (June 7 to October 15). All media including painting, drawing, printmaking, photography, mixed-media, collage, sculpture, pottery, jewelry and other fine craft will be considered. For more information and to download an application go to www.rockyneckartcolony.org/RNG2011application.pdf or call 978-546-2191. Deadline to apply: April 1, 2011.

Summer Artist Series : Call for Proposals
Deadline to Apply: April 18, 2011
The Rocky Neck Gallery is accepting proposals for nine two-week shows to be held this summer in the Rocky Neck Gallery from June 8 to October 12, 2011. The exhibit space is a 12′ x 6′ corner section of the gallery. Any artist, group of artists, or authorized representative of a deceased artist may apply in any medium. The Rocky Neck Gallery will provide publicity, signage, gallery sitting, help with hanging and receptions, and will handle sales. In return, the gallery will charge a fee to cover costs. For more information and to download an application, go to www.rockyneckartcolony.org/Summer_Artist_Series_application.pdf or call 978-283-3598.

Photos were taken on March 18th and on March 19th – More than Two different Moon Rises.

Deb Clarke just asked me how Felicia seasons her fried whiting.  I answered her on Twitter but not sure if she ever got it.  In any case here you can see exactly how it is done.  Fried Whiting is my very favorite fish to eat.  I could sit down with a pile of salted fried whiting and a couple of cold beers and have an incredible feast.  The pure white flesh of the whiting is the tastiest fish ever.  You eat it like corn on the cob and the meat falls away from the bone easily.   In my opinion the most underutilized species we have today.  It also make an incredible soup.

The rumor is you can only balance an egg on the equinox.  not quite the equinox, almost. this egg balanced until  the dishwasher changed cycles to rock’n roll.

can you balance an egg?  no salt.  this is not a bar trick.
best,
deb. 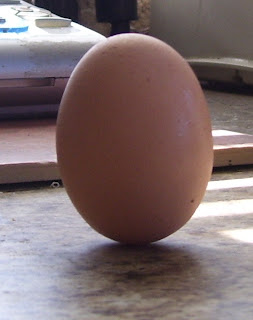 If you’re an American of a certain age, you might just now be discovering that Pottery Barn is a relic of your youth. Those days when you were in your early 20s, just out of college maybe. You moved into your first apartment — the first chance you had to paint your walls beige all by yourself, or buy a pillow with a big button in the center of it. And now things have changed. You’re older, you extensively moisturize, and you don’t know if it’s your newly-strengthened glasses prescription or what, but the stuff from Pottery Barn looks like crap.

Why should you care, you ask? Because, I would argue, Pottery Barn is important to America. Pottery Barn has become as central to our middle class (that vaunted and vanishing class) sense of style as Starbucks is to our middle class taste in coffee. We cannot afford to lose either place to the that slow and steady decline that came to Department Stores and Tiki restaurants 40 years ago.

Pottery Barn democratized relatively good taste in an all-pervasive way that was extremely helpful, especially in the early days of the company’s ascent. Pottery Barn made it seem possible for you to own a couch of proper proportions, an upholstered chair with classic lines and attractively muted fabrics. You, too, could buy that giant mirror with the square black frame and lean it against the wall, just so, and all your friends would know that it was okay because they had seen it in Pottery Barn.

I just bought two!  One for me and one for a gift. The woman from Local Ginger just tweeted that there is only a limited amount of these and it will sell out- click the pic to get it quick@!!!!

The Mrs and I ate there just last week, wish I would have had this deal then! You can read my comments about the “Duck” here

Ken is a pretty modest guy especially after taking into consideration all of his accomplishments and the critical acclaim he has received.

Here is a little about Ken from the Nightengale Inn website-

Ken Duckworth’s love of eating began while he was a child growing up in Chicago. The only son born to a Cuban mother and American father, he was fortunate to have his maternal Grandparents, Great-Grandparents and aunts all living on the same street as him. During elementary school lunch break he would hurry to his Great-Grandmothers table to find a home cooked lunch waiting for him. Young Ken loved to eat and Mama (Great Grandmother) loved to cook for him. Later the entire family moved to Tampa/Clearwater Florida and Ken continued his love of eating.

Ken’s love of cooking began at the age of 16 when he took his first restaurant job; he has been cooking ever since. At the age of 19, with a deep passion for food, Ken decided to make a career in the restaurant business.

While honing his skills at for five years at Saddlebrook Resort in Tampa, Ken met his future wife Nicole and the two began their culinary journey. From Tampa, Ken and Nicole headed to Saint Simons Island, Georgia where Ken went work at the world- renowned 5 star-five diamond resort The Cloister. Ken began at the Cloister as a lead cook at one of the Cloisters outlets specializing in world cuisine with a southern flair. He went on to become a butcher for the resort; practicing what he considers a lost art. Finally, he helped lead the resort’s Garde Manger in the Main Dining Room.

In 1998 Ken’s desire to work in a city with a great restaurant reputation and Nicole’s New England roots led the couple to Boston. There Jacky Robert took Ken on as sous chef at nationally acclaimed Maison Robert. At Maison Robert Ken built on his knowledge of French Classics and learned the nuances of working in a family run business. Ann, Lucien, and Andree Robert sent Ken to Paris to work at Le Relais De Auteuil, a two star Michelin restaurant.

In 2000, the Robert family gave Ken the opportunity to head up the kitchen as Executive Chef, where Ken truly came into his own. While running the two kitchens at Maison Robert, Ken developed menus according to the seasons, learned the business side of running a restaurant and developed an understanding of balance. The bittersweet closing of Maison Robert in 2004 led Ken and Nicole to a small restaurant with a rich history in the beautiful port city of Gloucester, Massachusetts.

Please leave comments or questions on which topics you would like to hear more about on The GloucesterCast or how we could improve.  Thanks for listening.

The GloucesterCast Theme Song  Gloucester Til The End Music is from Earl and Arch- you can download it for free at GimmeSound here- http://www.gimmesound.com/EarlAndArch-1/

I tried some and it was great on it’s own but Gloria says that many people eat it with their coffee. Now I can’t wait to have another one with a cup ‘o Joe.