Here’s the link to read the reviews

Thank you to the people on the front lines of the crisis that are sacrificing being away from their families- First Responders, Health Care Workers, Grocery Store People, Truckers and anyone else sacrificing to keep things moving.

Like Loading...
Hey joey.  Hope You and the family are doing well, baking away and having no fun doing your not so newlywed game!
I just wanted to show you the newest banner that’s going to be hanging from 12 Rogers St., a.k.a. the Terrazzo of hope!  Sending you this Only so when you drive-by you can look up 😎😻😻
Ciao ciao
Rina Cav

On June 27, 1629, the ship “Talbot,” from England to Salem anchored in Gloucester Harbor.  Four men rowed ashore at the large island near their anchorage and picked strawberries, gooseberries, and roses.  Fifteen years later, after the town of Gloucester had been settled, the town voted that the island should be used to pen “Rams onlie; and whoever shall put anie but great Rams” would be fined two shillings per animal.  The island that the “Talbot’s” men went ashore on has been known as Ten Pound Island for those ram pens (or pounds) ever since.

Local lore (erroneously) suggests that the name of the island derives from the amount in silver money paid for the island. However, in 1700, the selectmen of Gloucester entered into an agreement with Samuel English, descendant of Agawam sagamore Masconomet, where English would sell all claim to the lands within the bounds of Gloucester (including present-day Rockport) for the amount of seven pounds in silver money. (There was once a smaller Five Pound Island in the inner harbor; it’s now the end of the State Fish Pier.

Rams weren’t the only animals associated with Ten Pound Island. In 1817, a large, heretofore unknown animal was seen plying the waters around the island, and sunning itself on the rock.  Many prominent citizens attested to seeing the serpent, and the Linnaean Society even took enough interest in it to give it a Latin name.

Ten Pound Island was an ideal location for a lighthouse, and in May 1820, Congress approved funds to establish a light station. The fixed white light was lit the following year, atop a twenty-foot conical tower that was thirty-nine feet above sea level.  By 1842, however, the tower and keeper’s house was in disrepair. This didn’t stop artist Winslow Homer from spending the summer of 1880 boarded at the keeper’s house.  The next year, a conical brick-lined cast iron tower was constructed.

Still under the control of the United States Government, Ten Pound Island became home to two other federal institutions: a fish hatchery in 1889, and a Coast Guard air base in 1925.

In 1925, amid Prohibition, the Coast Guard engaged in smuggling interdiction, as Cape Ann proved to be well suited to smuggling illicit alcohol from outside of the three-mile limit then in effect.  On the island, the Coast Guard constructed Base 7, consisting of an Army surplus canvas hangar and one scout plane.  It was manned by a crew of two Coast Guardsmen. June 20 of that year marked the first use of an aircraft to chase rum runners.  The first capture by an aircraft was made four days later.  The success of Base 7 (or the challenge of chasing speedboat-borne rum runners) led to increasing the facilities and assets.  In 1926, the Coast Guard built a permanent hangar blasted from the ledge at a cost of $5000.  More aircraft were acquired: two amphibians were added, bringing the total aircraft to three; and the complement of men was increased to seventeen.  The base was under the command of LtCdr Carl von Paulsen.  Between 1925 and 1929, the Coast Guardsmen of Base 7 responded to 212 cases of distressed vessels and rum running activity off the coast of Cape Ann. 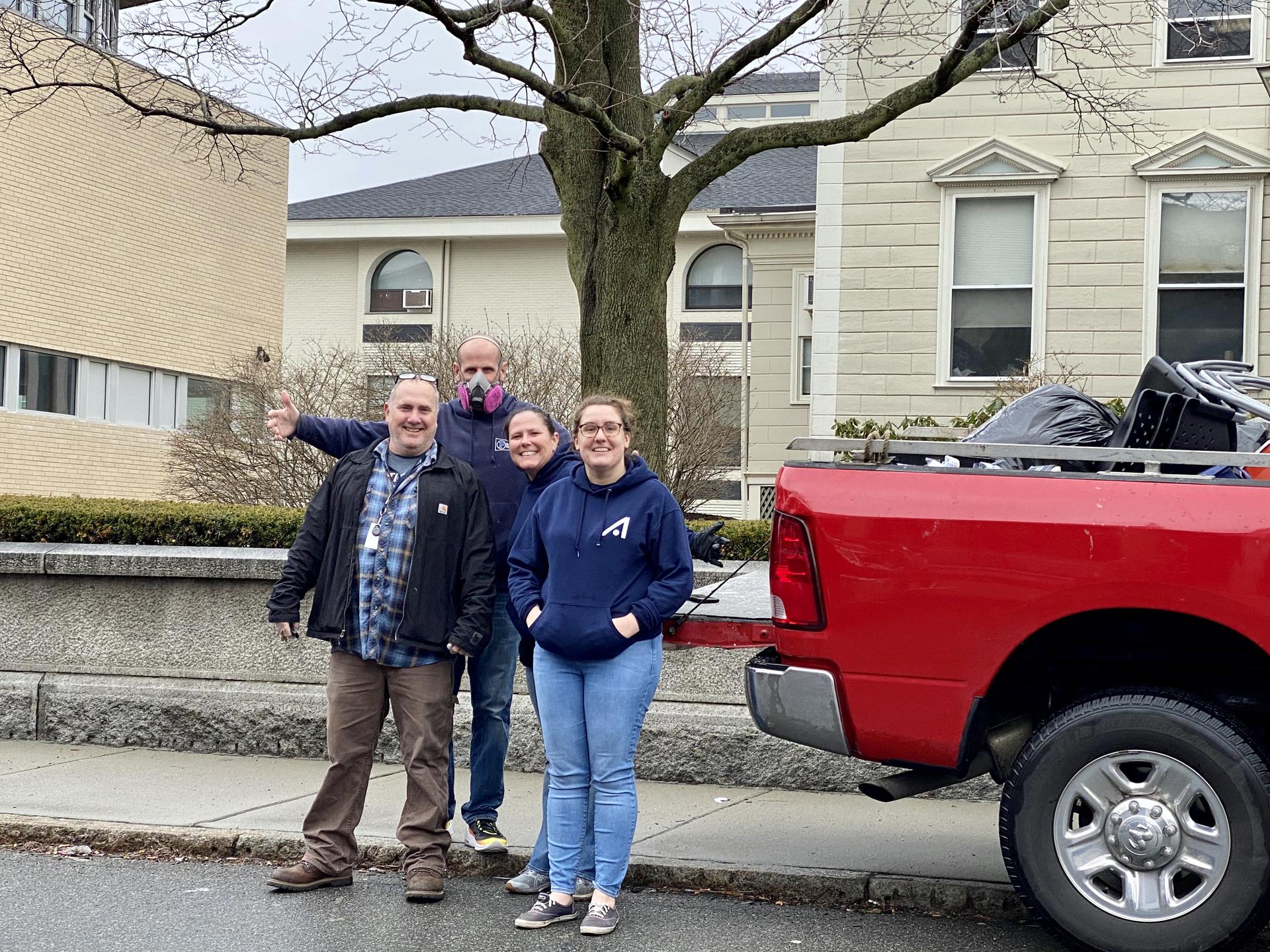 Meeting people’s needs with incredible support from our community

During this pandemic, we have been challenged to respond quickly to the changing needs of our clients and the community. Luckily, our community seems to recognize how important it is to protect EVERYONE, regardless of their housing status or income.

There have been hundreds of groups and individuals supporting both the Shelter and the Cape Ann Emergency Relief Fund, such as the Essex County Community Foundation (ECCF), who have provided emergency grant support to our Shelter operations, as well as the super-kind ‘We Are All In This Together Gloucester‘ FB community, who provided dinner for the staff and guests at the shelter one night. Cape Ann Savings Bank stepped up to support folks who have lost income related to COVID-19 by making a significant contribution to the Cape Ann Emergency Relief Fund, which will end up benefiting many people in our community.

We want to thank EVERYONE for supporting people when they need it the most.

Want to help? Get dinner delivered to the Shelter!

We’re looking for local organizations, businesses, or individuals to purchas a lunch or dinner for guests and staff at the shelter. Both lunch and dinner are needed on upcoming Saturdays & Sundays. They’ve had great luck ordering with Destino’s, George’s, Firing Up, Mike’s Place, & the Causeway Restaurant. If you’re interested in providing a meal, please email Erin at egeorge@actioninc.org

The Jam: Mondays at Minglewood Tavern with Dennis and Joe

Hey Jamily!!
Once again, we are PSYCHED for another amazing lineup for the Virtual Jam TONIGHT!!
I’ll be popping up live around 7:55 to intro the night, and welcome you all. At 8p we shall commence the music! Here’s our schedule:

A sweet moment today with a girl reading out loud to her younger sister below.

Thatcher had a homework assignment to stage two photos showing perspective distortion.  So, after I figured out what perspective distortion is, we took a little ride.  This is what we came up with.  Photo #1 shows Thatcher putting his finger on top of the one of the Twin Lights on Thacher’s Island….  I mean, we kind of had to, right.   The lighthouse obviously looks tiny (no brainer….because it’s further away).  The second photo is meant to look like an itty bitty Thatcher is standing on the back of a massive orca whale.  It was actually kind of fun and I look forward to being able to explore that homework assignment further with him when it is ok to be out and about.

Guess who is back! That’s right Tonno Restaurant is back for takeout. We will be answering the phones for takeout on Thursday Friday and Saturday. Takeout is available from 4:30-7:00 this week on those days. You can also pre-order now if you like. There are limited quantities so pre-order is strongly recommended. We will also be offering curbside pickup in our parking lot which makes it a lot easier if you do pre-order. The link is in the bio. We will be expanding our menu as you help us grow the business.

We can not wait to get back to work, miss you Gloucester.
www.toasttab.com/tonno

I don’t know if this is what I want my “drink delivery system” to look like, but perhaps this is the new trend. What do you think of this Keurig-style drinkmaker?Now “on sale” for $249. Drink pods are not all available in our area, but seem to average around $15.099 for mojitos, cider, gin & tonic as examples. I’m not sold especially since Keurig coffee pods are much too weak for my taste. If there’s one thing I do not want to be weak, it is my preferred cocktail. But I’m open to the idea. Have you got thoughts to share? More info here: https://www.drinkworks.com/

I made French Baquettes today with a recipe I have been using since I first made this as a teenager many years ago. It’s n the old “joy of cooking”, not the new “joy of cooking”. My mother had a few cookbooks but the “go-to” was The Joy. It has everything in it, even how to cook squirrel etc. I wanted to know what real French bread tasted like, and I have never stopped using this recipe. When people bite into it they roll their eyes. I am not kidding! #frenchbread #baquette #joyofcooking

This Nia routine is all about flexibility and strength to music from movies, not musicals, but movies whose soundtracks have become iconic.

If you are new to Nia with Linda, these streaming classes are free.  Share with anyone who you feel needs a little movement in their lives during this period of social isolation.

So here is how it works.  It will be easier for you if you download the Zoom client for meetings for a desktop or laptop, or the app for phones and tablets.

At my website, niawithlinda.com, you will want to click on the link for the class and time you are trying to join.  Otherwise you will be all alone!

If you have downloaded the client/app, the…