The "Ardelle" getting ready for the Launch on Saturday.
Shot this from the "Lewis Story", the Shipbuilding Museum Schooner, coming home to
Essex for the "Ardelle" celebration on Wednesday.
-Len Burgess

On Saturday, July 9 between 6 and 7 p.m. a historic Essex side launch of a 50-foot double sawn frame, two-masted, wooden schooner will take place at the Burnham Boatyard in Essex, MA. Ardelle was built by Harold Burnham, 44, of Essex who is an eleventh generation Master Shipwright. He will launch the vessel using the Essex side launch – where the massive schooner is literally leaned on its side and sent careening into the river basin.
Burnham is part of a shipbuilding legacy that dates back to the first settlers of Essex in the 1600s. With Essex’s long history as a shipbuilding town, where generations of shipwrights built vessels on the banks of the Essex River using the unique Essex side launch technique over three centuries..

"Essex shipwrights always used the simplest method they could to get the finished boat out of the way of the one they were about to start," said Burnham "The most popular method in Essex was called a side launch. Side launches were carried out by just leaning the vessels over onto a single way and skating them into the water on their own keel and one bilge."

"Of course, in today’s world the idea of sending a hundred tons of oak sliding on one side over smoking grease sounds dangerous, but that is only because we don’t do it much anymore. Just imagine the looks you would get from a 19th-century shipbuilder if you tried to explain to him what it is like to pass a car on an undivided highway. The truth is that of the approximately 3,300 vessels launched in Essex, we know of none that was seriously damaged in a launching accident. Further, there is no record of anyone being seriously hurt or killed at one of our launchings, either.

Final preparations for the launch on Saturday.
Len Burgess 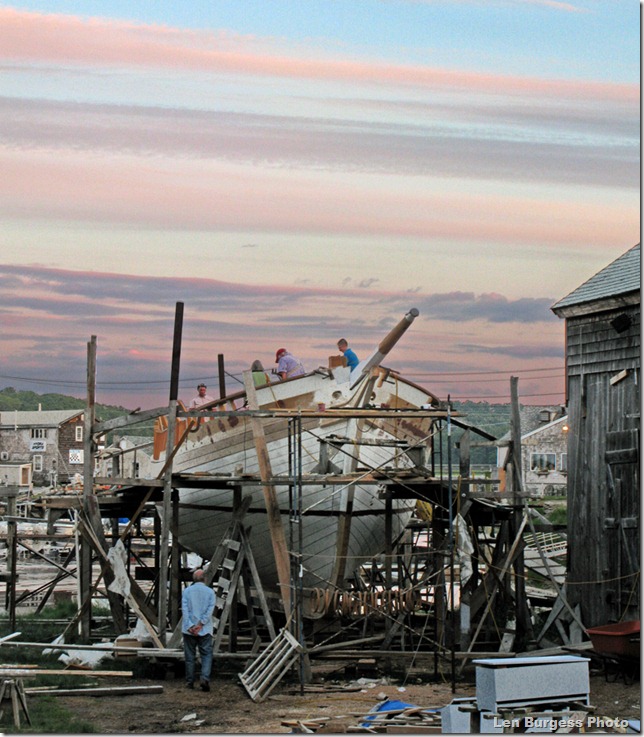