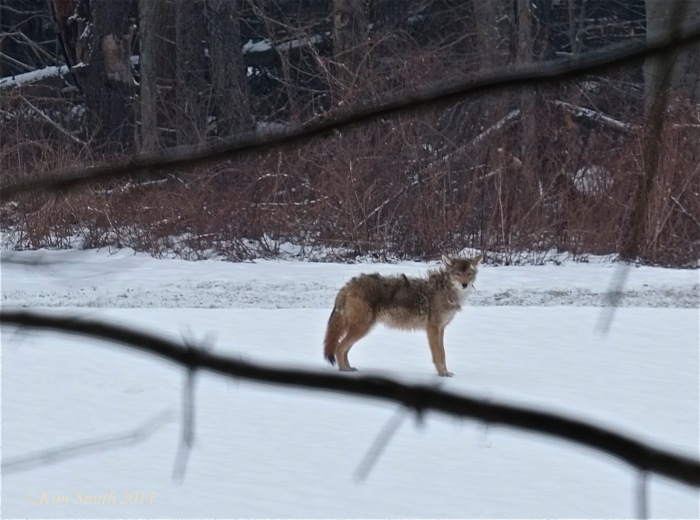 Joey forwarded the following information and links from an editorial that was recently posted on “North Shore Nature News.” We’ll post the first several paragraphs from the editorial, and the comment from Jim Schmidt that Joey found particularly interesting. In fairness to the author, the See More, directs the reader back to the original editorial.

Wolves once occupied the top of the area’s food chain. But we hunted them into near extinction. So, with no wolves in the area, coyotes began to enter the commonwealth in the 1950s as the food chain’s top dog. DNA evidence shows the coyotes mated with what was left of the wolves and with dogs. The cross breeding created the eastern coyote, a larger version of what wildlife experts now call the western coyote.
The coyote is bolder and more adaptable than the shier, more reclusive wolf. So, instead of confining itself to rural areas, as the wolf once did, the coyotes occupy rural, suburban and urban habitats. Add the fact that Massachusetts loses an estimated 40 acres a day of rural land to development and it’s inevitable the human and the coyote worlds will collide.” – See more at: Ipswich Wicked Local

“I have 54 years of first hand and face to face experience with coyotes. I retired as a fulltime USDA government coyote specialist recently. I have dealt with coyotes in New York, South Carolina, Kansas, Texas, Colorado, New Mexico, Nevada, Utah, and Arizona. Many remarks in this editorial are very incorrect. Coyote are dangerous wild predators. They are smart, problem solving, professional killers. They kill and eat everything too.

They DO NOT have to be rabid to be dangerous. Look up the “Biting Coyote of Green Valley, Arizona” as an example. This unprovoked coyote attacked and bit 8 adult people. The media and local medical professionals claimed it “must be Rabid” and it was not. How do I know? I was the one that removed him. Coyotes have a very low history of rabies too. I know first hand that coyotes will attack any size animal if it wishes. Three coyotes attacked and killed a large Rottweiler dog while the owner was walking it and another large dog. They killed and ate it-I was there again.

How do they kill a horse you ask? They will run it until it over heats and stops and often lies down and they take them. I have seen it again. They stand at the rear of a cow or horse giving birth and attack and kill the newborn when it hits the ground. Goats, sheep, chickens, cats, apples, water melons, garden hoses, and much more are at risk all the time…basically nothing is safe from the clever coyote. This dangerous animal will never be on welfare as it can take care of itself better than anything I know of or experienced.

I encourage you to learn the truth about coyotes not fantasies. They are a marvel of nature and they are in your state and community now. This is a professional dangerous killer for sure.” Jim Schmidt – See more at: Ipswich Wicked Local 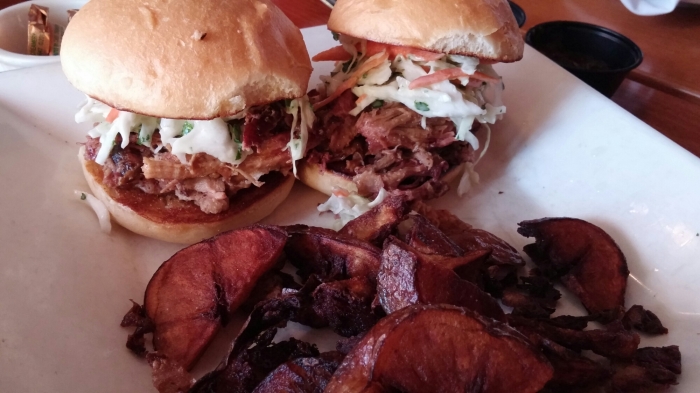 I am looking forward to celebrating International Women’s Day, or Festa Della Donna, tonight with friends at the Gloucester House. We’ll be honoring Mayor Romeo-Thekan!

I was curious about the yellow flower that is traditionally given to women on International Women’s Day and it is the mimosa flower (Acacia dealbata), which has become a symbol of female solidarity. Immediately following World War II, it became popular in Italy to give the flower for La Festa Della Donna because of its cheery hue, sweet scent, and abundance in blossoms at that time of year. 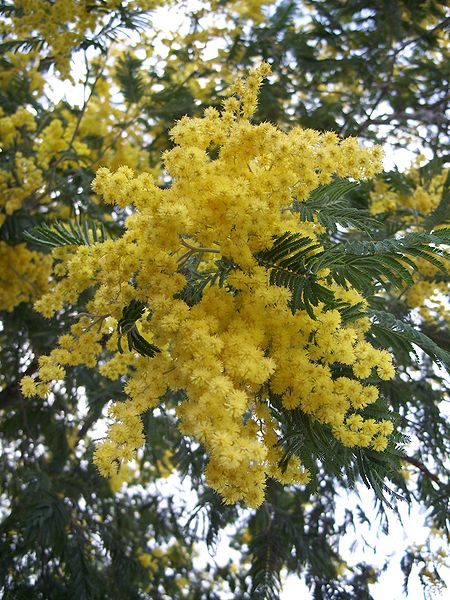 International Women’s Day began as a day of memory and protest, following a tragic event that took place in 1908. One story of its origins purports that in early March of that year, the women textile workers (mostly Italian) at a New York City factory went on strike to protest the abhorrent working conditions. The owner blocked all of the exits to the factory and set the building on fire. The 129 workers trapped inside all died. 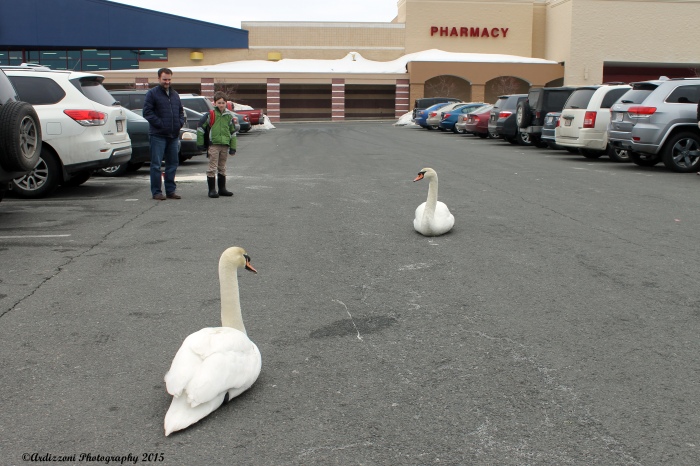 These beautiful swans have been in the parking lot at Best Buy/Target in Danvers for a few days. Authorities state the swans cannot fly due to the cold and the water sources are frozen. For more information these swans please go to the following link. Also please remember to not feed them or get to close and just let them be. Authorities have been checking in to make sure they are ok.
http://www.wcvb.com/news/swans-making-danvers-parking-lots-temporary-homes/31593550

These swans are near target and best buy..so pretty 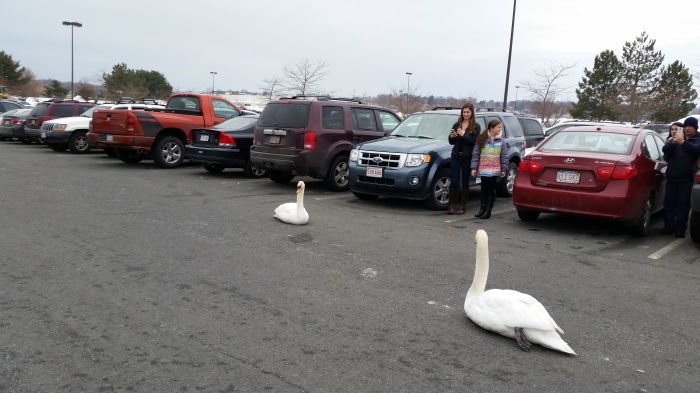 Do we seriously need this sign on airplanes still? Hasn’t it been like 40 years since you could smoke on an airplane??? 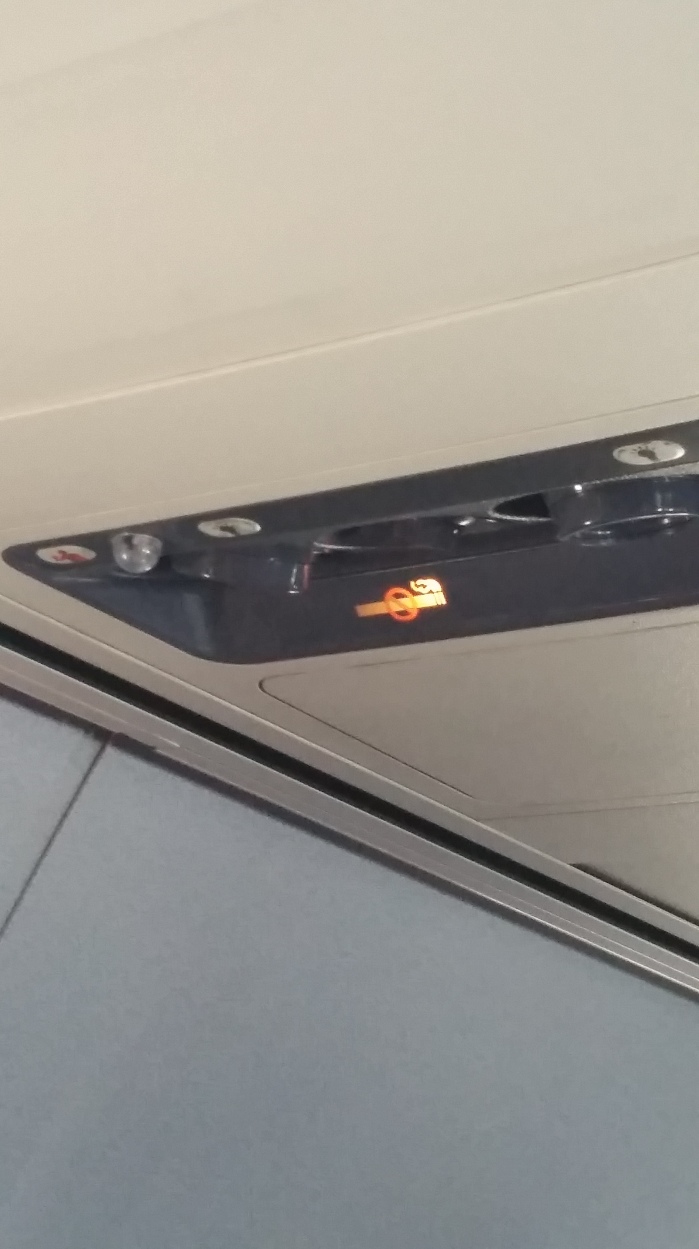 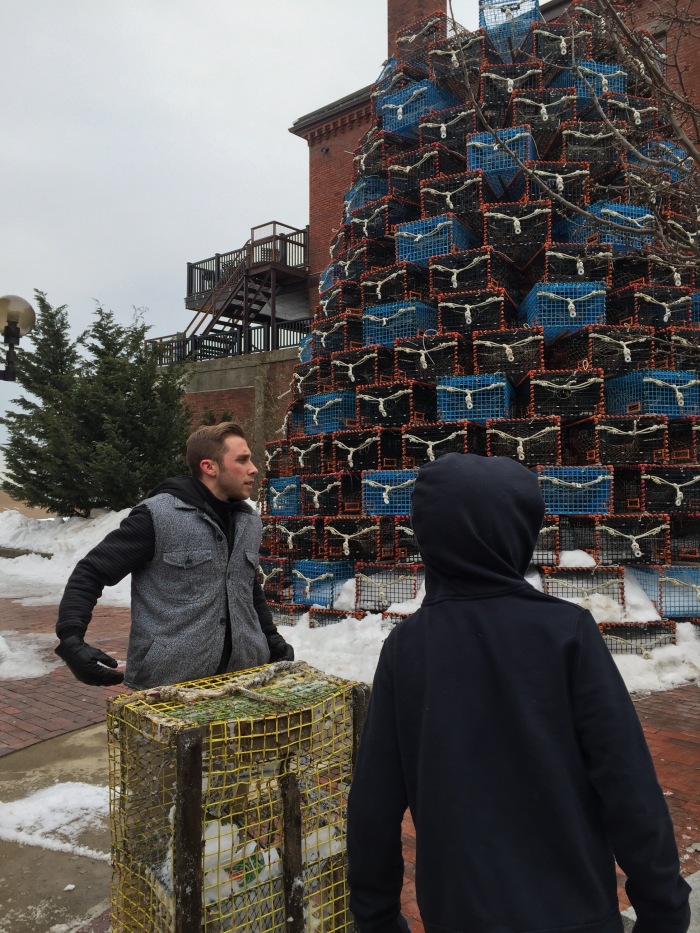 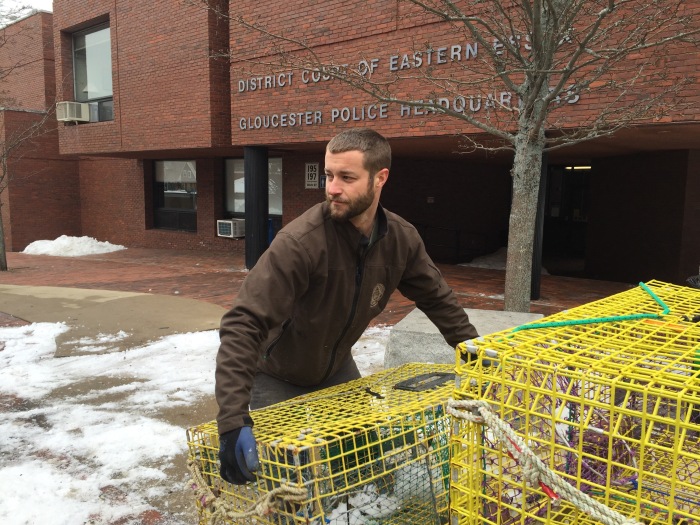 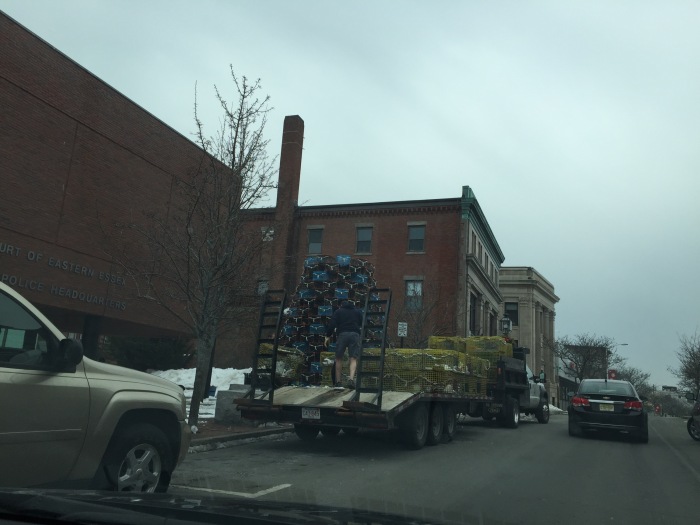 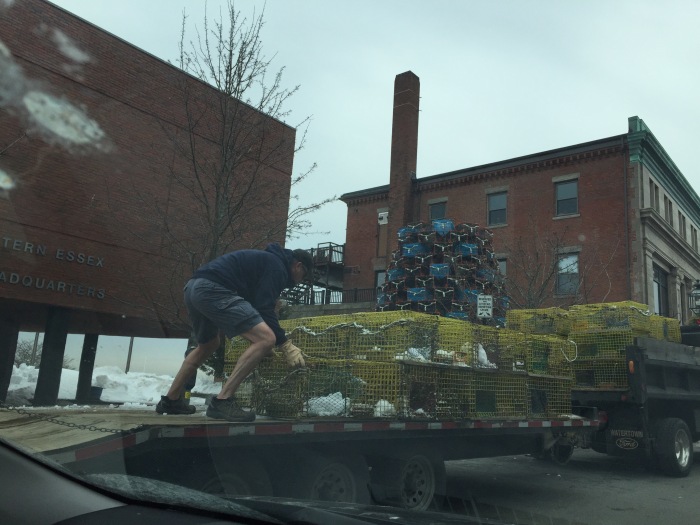 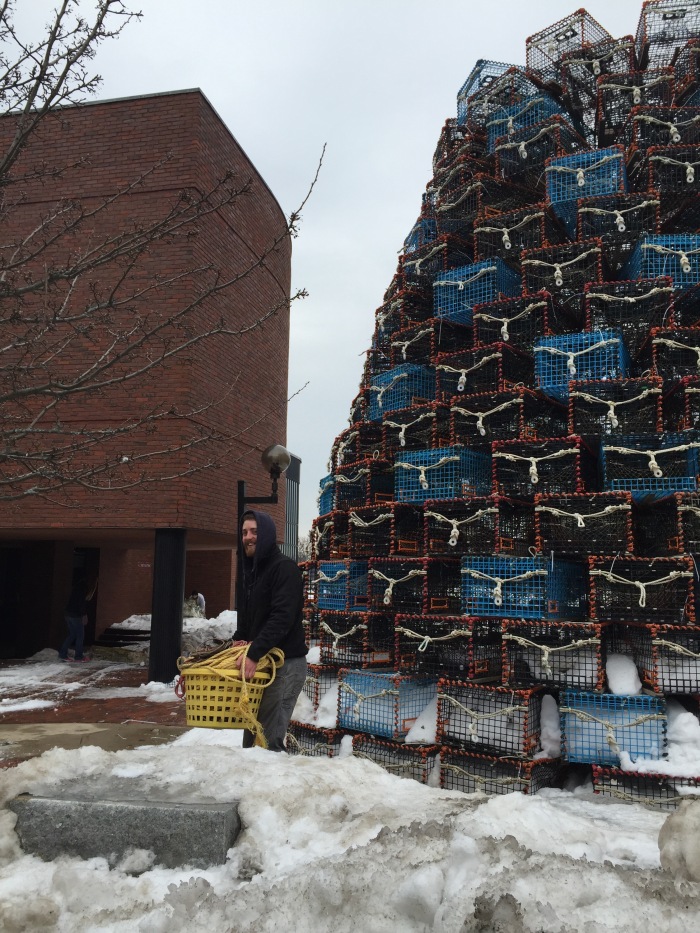 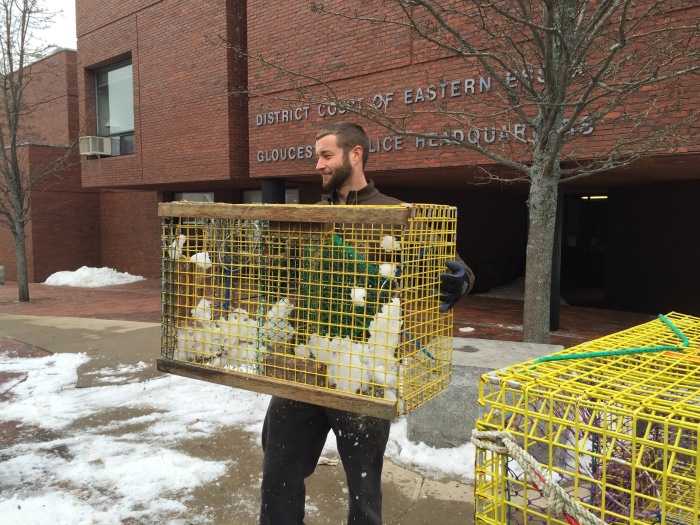 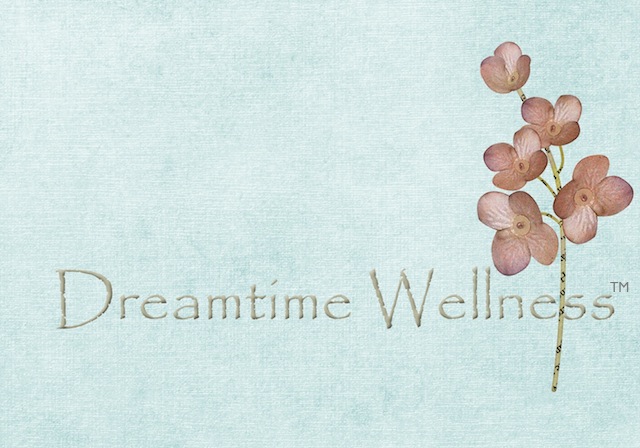 Misao Ōkawa (大川 ミサヲ) Born March 5th, 1898 is the oldest living woman. She currently resides in a nursing home in Osaka, Japan. (See link above for more of her story.)

When asked her advice on ‘longevity,’ Misao-san answered

Benefits Sushi is high in natural Omega-3 fatty acids which has been reported to help decrease inflammation. Information on Omega-3 and health benefits from Mayo Clinic – http://www.mayoclinic.org/diseases-conditions/heart-disease/in-depth/omega-3/art-20045614 Over the past few years we have seen an increase in Sushi offerings on Cape Ann: Latitude 43, The Rudder, Madfish, the Franklin, Midori, and the Studio are some of the Cape Ann Restaurants offering… 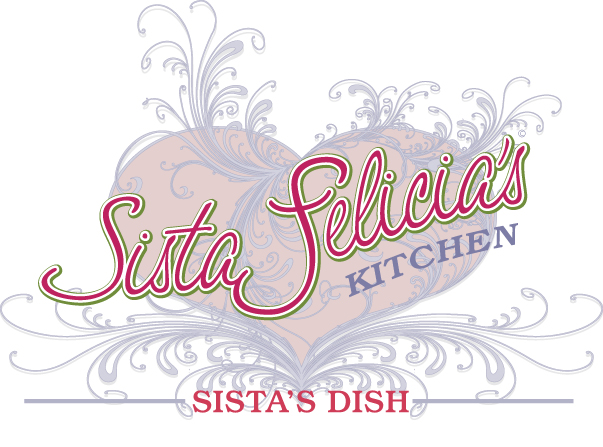 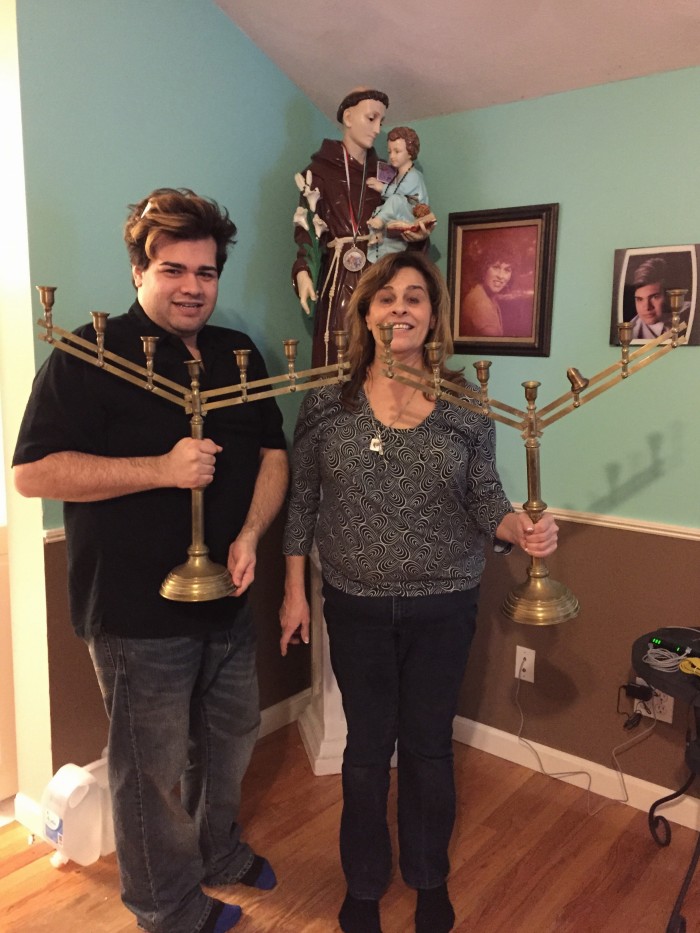 Tonight Dolores Sheehan granddaughter of the late Francis Linquata will have the honor of placing her grandmother antique candelabras onto the top tier of our families altar this evening, during our official kickoff to 2015 Feast Of St. Joseph, and 10 rosary. The heirloom pieces were once displayed on the Linquata family’s St. Anthony Altar for over 70 years. Last year Dolores was brought to tears with happy memories of attending her grandmother prayers services in front of their families’ shrine after attending one of my rosaries.  After the tears were wiped and stories of novenas past were told around the dining room table during coffee time preceding that night’s rosary, Dolores pulled me aside to tell me that she had been storing her grandmother antique candelabras for several years waiting to find a special place for them to be once again displayed. Dolores then stated that, the special place she was looking for was our families’ altar.  After a long teary-eyed embrace, I accepted Dolores precious gift and we began planning their début for this year’s St. Joseph Altar. A few weeks ago Dolores invited my brother Joey and I over to her home and graciously gifted them to be displayed on the top tier of my family’s St. Joseph altar this year. In keeping with my Aunt Vincie & uncle Mike Militello’s tradition of adding one extra night to the traditional 9 day novena/rosary,( just in case you need to miss a night you still can fulfill your 10 day commitment/devotion,) we will be kicking off the 2015 Feast Of St, Joseph by once again extending an invitation to all other families who host a St. Joseph Altar, to join us tonight for the first rosary of the season. The rosary tonight will be  led by my dear friend Rosalie Orlando Foti.  Tonight’s services will begin at 7:00 pm in front of our family’s altar. ALL Host Families are welcome to attend. The gathering of families at one altar the past two years has been a wonderful experience for all who attended. Our Family is looking forward to seeing many altar hosting families in attendance tonight. 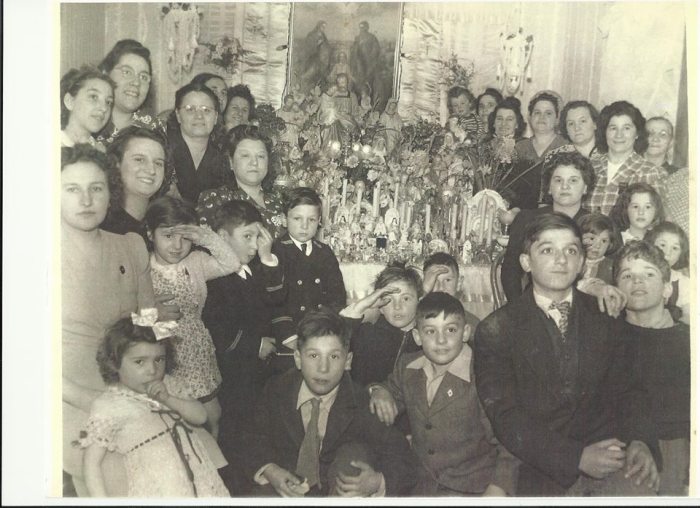 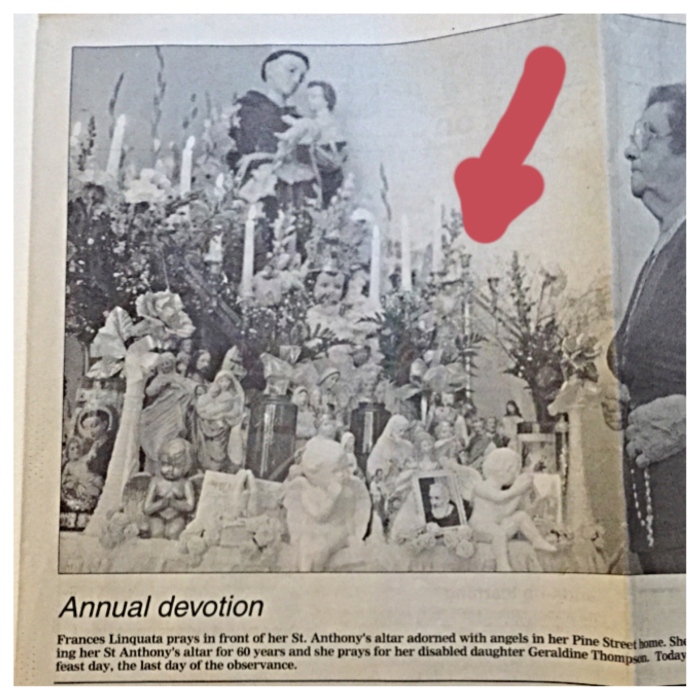 Sista Felicia Writes~ I personally would like to thank Dolores and the Linquata family, for entrusting me and my family with your precious family heirlooms. I’m deeply touched by your kindness and our family is honored to have a pieces of The Linquata Family history on the altar this year. Through years of friendships, and business the Linquata and Ciaramitaro families have shared a connection that has tightly been intertwined for generations. It’s only fitting that the linquata family be represented on the highest tier of our altar! 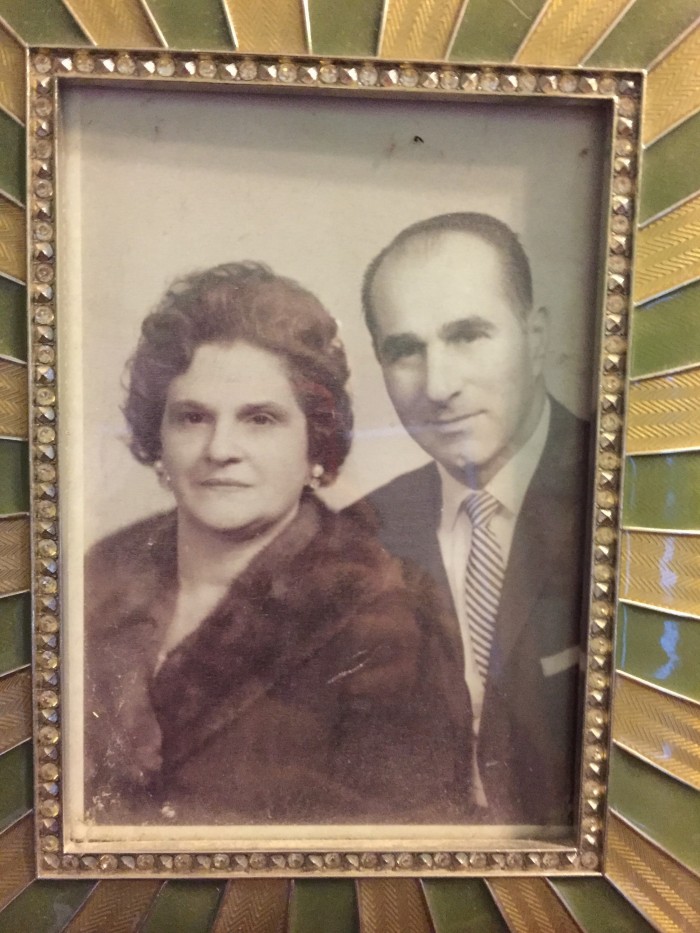 Super GMG FOB Al Bezanson sends along “Fast Food Stop”. What do you think Al–is it a male Dark-eyed Junco? 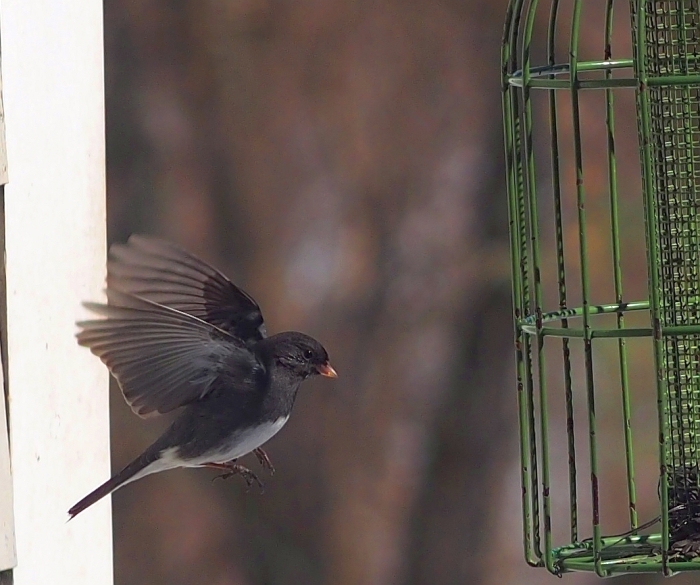 Ok, this will be short and sweet, I promise.

Would you like to know what just sent me over the edge?

We live in flip flops for the majority of the spring…certainly the summer…and even a good part of the fall.  Which, I am sure you are all onboard enough to realize, equals little to no socks in the laundry!

I hit my threshold this morning.  An average week, thanks to normal days, six “hockeys”, a couple of runs, some changes of wardrobe due to stepping in boot puddles by the front or back door, cold feet at night, etc. can easily add up to 40 paris of socks each week.  Shoot me.

I actually look forward to the occasional lost sock…because that means I can throw the widowed match away. 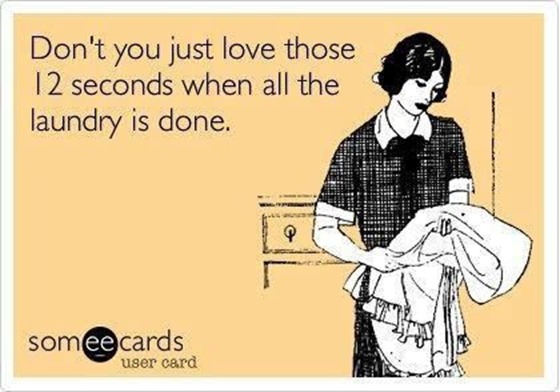 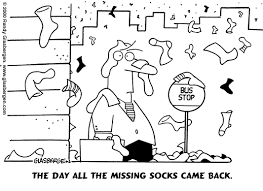 Please send your GMG submissions to any of our other contributors. Thanks.

I won’t have my computer to edit press releases so if you have something, forward it to one of our other awesome contributors! 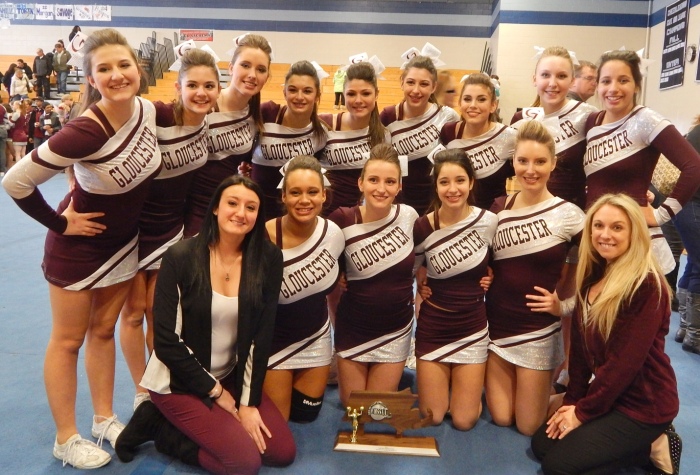