After battling and documenting raccoons tearing into our trash time and time again and trying a whole slew of different types of methods to avoid having to pick up garbage left behind strewn all over the walkway we discovered an organic way to deter the little bastards.

Since the Mrs has been sprinkling red pepper flakes all over the lid and top of the trash bags we have been without incident in over a month!  Thank god because I’m such a pussy I don’t even want to open the door to club them over the head with a baseball bat and this seems like  a whole lot easier method than going all Rambo on them.

Saw this guy in the back of a pick-up truck this morning after being caught in a trap.  The owner of the pick-up truck is doing the humane thing and bringing it to the woods where he will pour gasoline on it and let it on fire release it back to the wilderness. 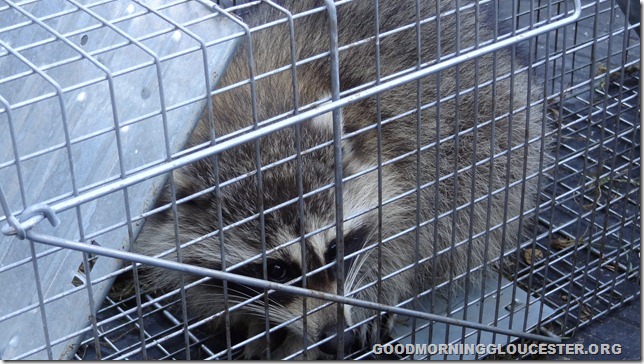 This was a post from a couple years ago-

I shot up out of bed like a rocket figuring that the maniac (Snoop Maddie Mad) finally figured out how to climb out of her crib and had landed with a thud.

The Mrs, startled said no, it didn’t sound like a small child hitting the floor and we would have heard her wailing.

Then silence and we hear shuffling outside…  GODDAMN RACCOONS!

We’ve been having a problem with them for about a month and last week started putting bungee cords over the lids of the trash cans.  Little bastards still got into the trash.

3:45am Visitors, originally uploaded by captjoe06.

Click the picture below for a video of the brash raccoons

Hi Joey,
I know you have been showing what’s in Jenna’s garden. And I have really been inspired.
Did you know that the Rockport Elementary School grew their first vegetable garden? I made a blog post about it couple of weeks back. Here’s the link:

My How the Garden Has Grown!

Can you tell me what happened to the large black buoy that used to be right across from the Annisquam Yacht Club and Coffin Beach?
Way back in the 40’s we used to swim out and climb up the buoy.
Told my grandchildren about it and they went to Wingaershiek Beach yesterday and said it wasn’t there! (they probably thought "the old lady" is a little hoopy!)
Thanks for any info!
Georgia Kelly 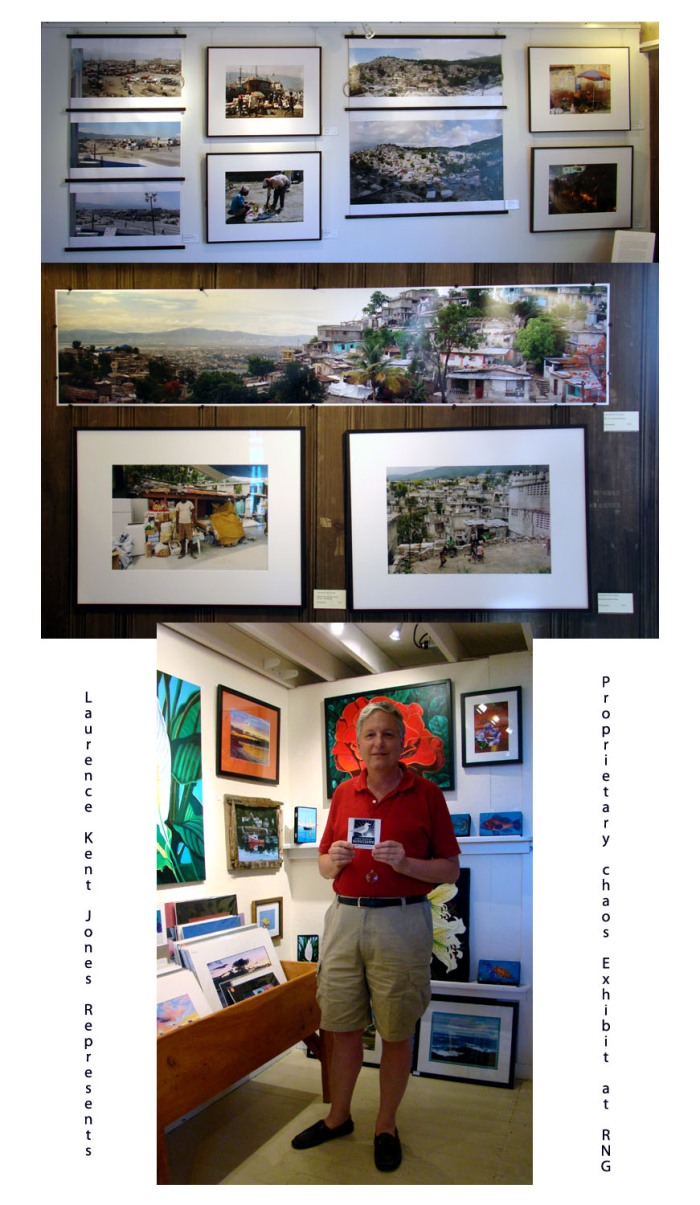 Laurence Kent Jones represents at Khan Studio and the Good Morning Gloucester Gallery on the day that he took down his exhibit “Proprietary Chaos” at the Rocky Neck Gallery (which I luckily got to see and photograph in the morning before it came down), and just days before leaving for his next assignment in Hong Kong.  Laurence spent the last 4 years in Haiti and will spend the next 3 in Hong Kong.  Although he lives in Gloucester, he doesn’t get to spend much time here, so he really appreciates Good Morning Gloucester for keeping him connected while he is away.   Laurence is Chief of American Citizens Services for the U.S. Consulate. 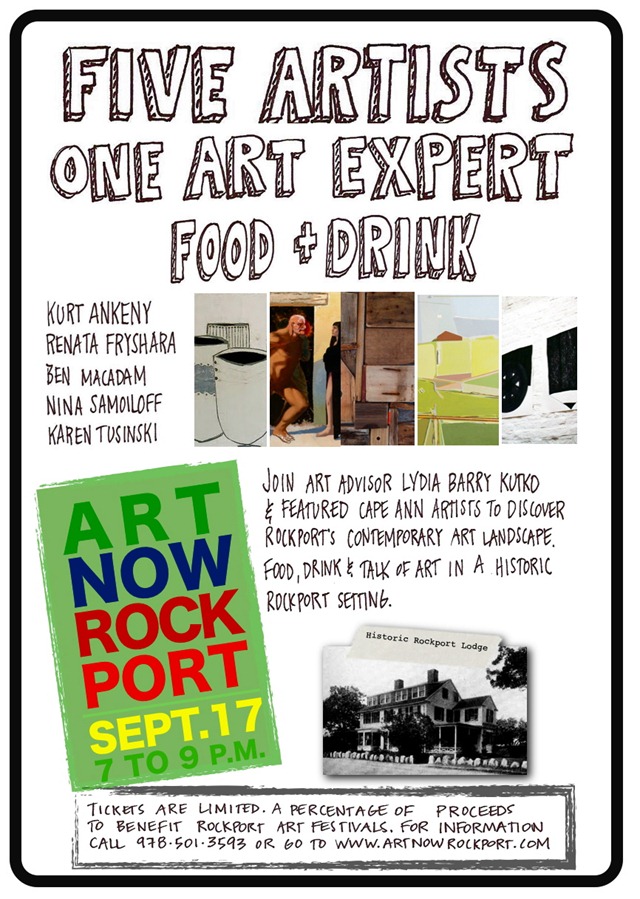 Good Labor Day weekend to you all:

I’m pleased to announce that I will be a part of the Art Now: Rockport evening on September 17th. This is an intimate evening with five of Rockport’s leading contemporary artists where conversation about art and a bit of context provided by Lydia Barry Kutko, a New York based art advisor, will set the tone for the night. We hope that the event will help to contextualize Rockport’s contemporary artists and help familiarize attendees with the artists pushing past the boundaries of the more traditional artworks that Rockport has a reputation for.

Tickets are available for this evening event, please visit www.artnowrockport.com. (The official promo poster is attached to this email.)

Featured artists: Kurt Ankeny, Renata Fryshara, Ben MacAdam, Nina Samoiloff, and Karen Tusinski. Much thanks to Sarah Kelly, Rockport’s very own events guru and all around booster for the arts! She has organized and promoted this event, and we are very happy and grateful to have her in our corner!

Thank you, and I hope to see some of you there!, Kurt

I now have in stock this NEW photographic book of Cape Ann that were hand delivered and signed by my friend and neighbor
Alan Murtagh who’s photographs are the only ones that are featured in this book. These are the first ones in the area and I have a limited supply in stock right now. Please let me know if you would like to reserve a copy. These will make a great Christmas gift or just for your own collection of Cape Ann books.
Thanks and enjoy the link to the book below,

You can feel it in the soft sands of Wingaersheek Beach, hear it in the thundering waves of the Back Shore, and smell it in the crispy, salty air that permeates the region. It’s the heart of a place that beats with rustic beauty. It’s the heart of Cape Ann.
Gloucester, Rockport, Essex, and Manchester-by-the-Sea are the brilliant gems that make the treasure of New England sparkle. From the historic fishing industry to the creative art colonies, Cape Ann is a place like no other. And with its traditional festivals, incredible seafood, overflowing antique shops, and scenic splendor, it’s no wonder the area draws thousands of visitors each year.
Photographer Alan Murtagh has been capturing the beauty of this unique place for 15 years. His images evoke the spirit of Cape Ann in a way that stirs the viewer’s imagination-you not only see it, you can actually sense it.
When you come to Cape Ann, you will discover it’s not just a visit, it’s an experience. And when you leave here, you never really leave, because Cape Ann is a place in the heart. 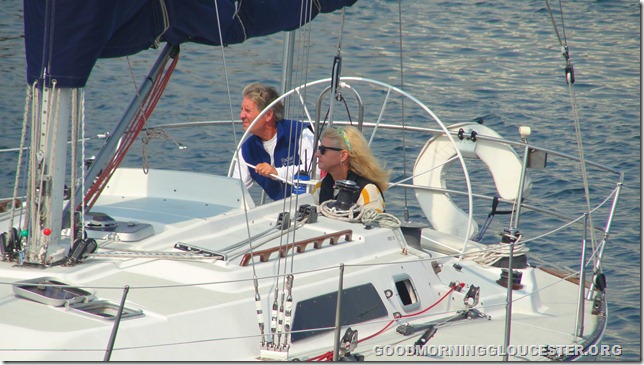 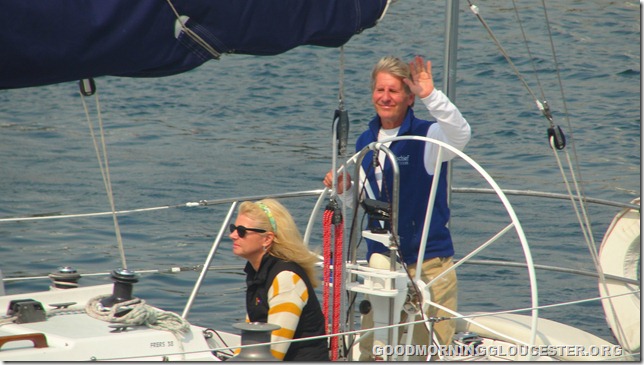 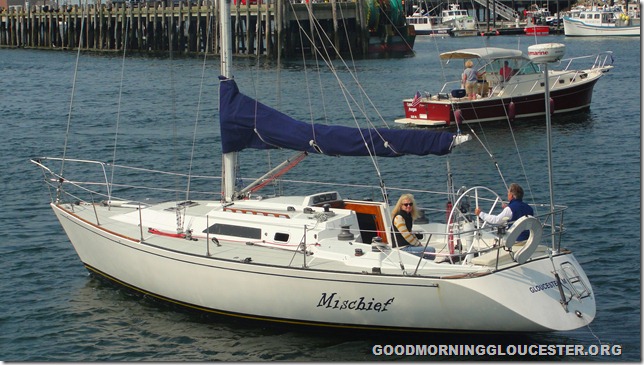 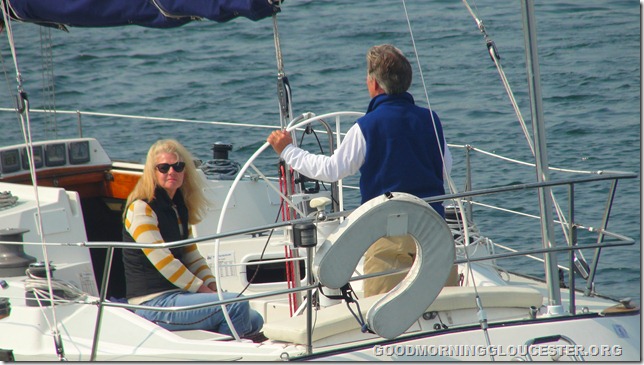 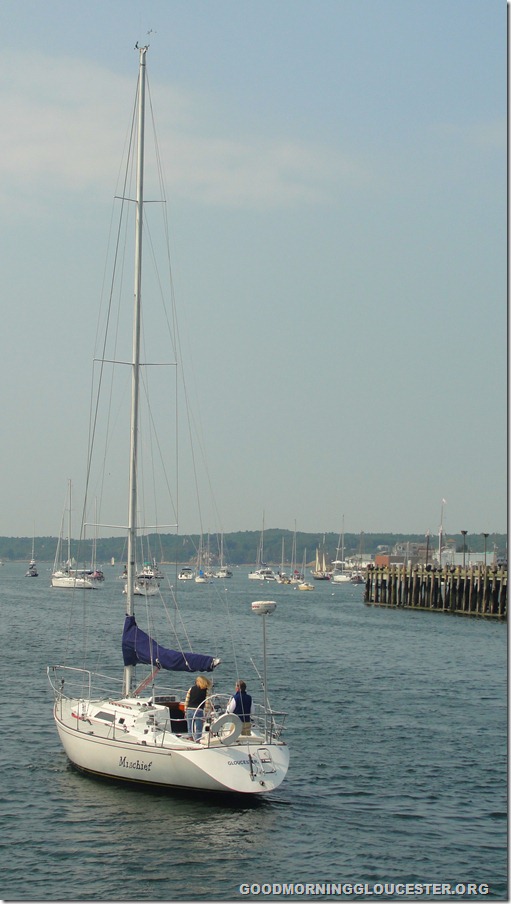 “If the Wind will not Serve, Take to the Oars” 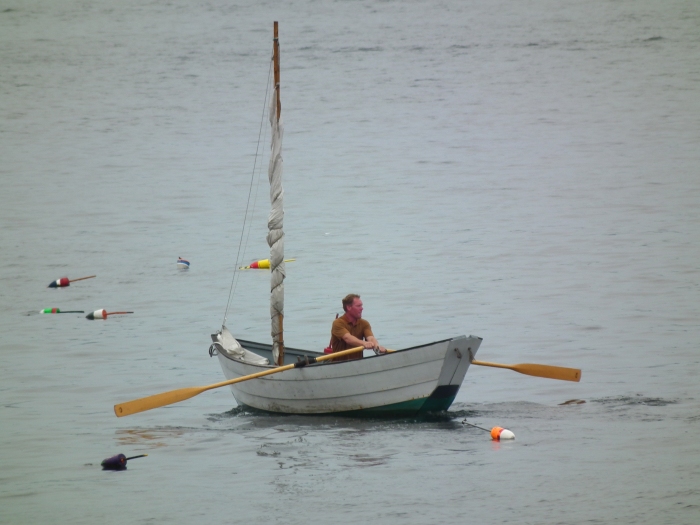 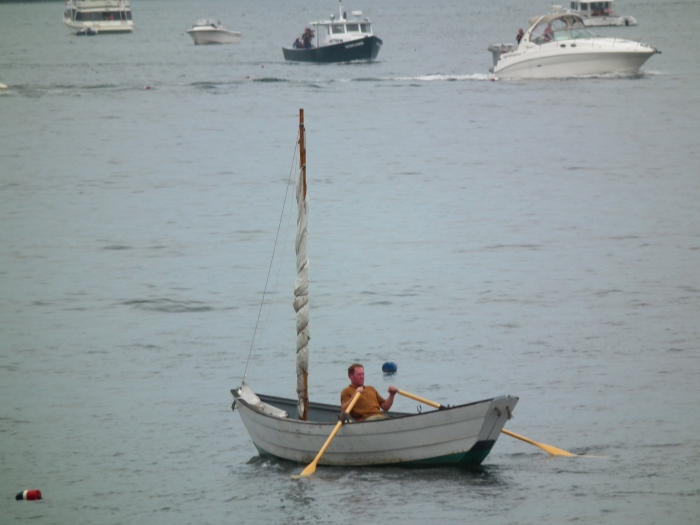 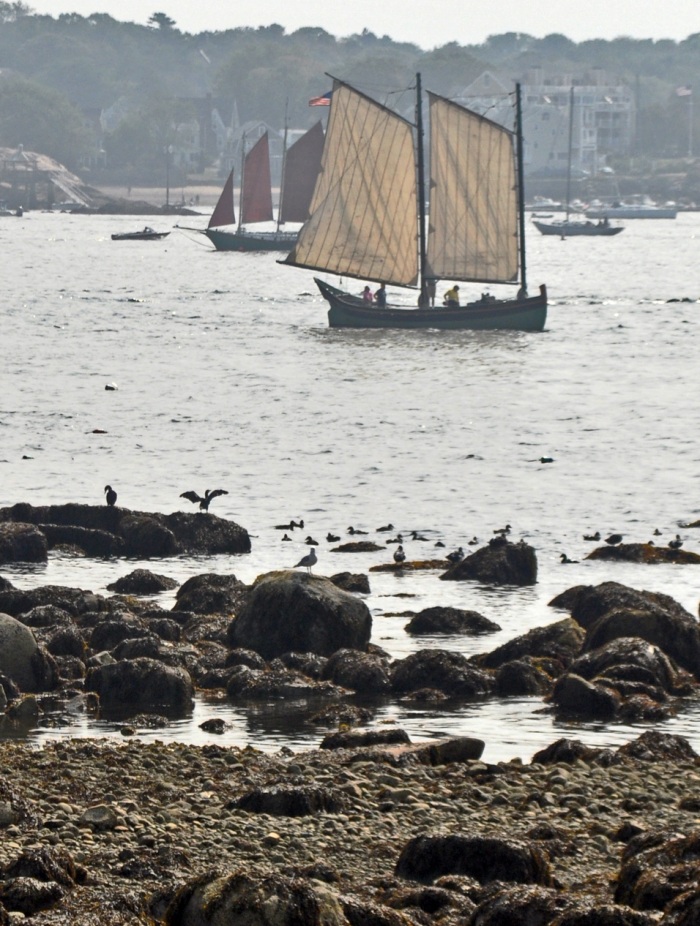 Thank you to Bob Hastings and The Cape Ann Chamber of Commerce for inviting us aboard to cover the race.

Labor Day Sunflowers–visit my blog for more photos of sunflowers, Joe and Helen Garland, moving the kids to college and grad school, and of course, butterflies! Also, a beautiful illustration found while looking online for Rockwell Kent images of the Labor Movement. TitledGodspeed, it is a wood cut of an angel watching over a sailing vessel, with Northern Lights in the distance.

Enjoy this gorgeous weather and Happy Labor Day to you! 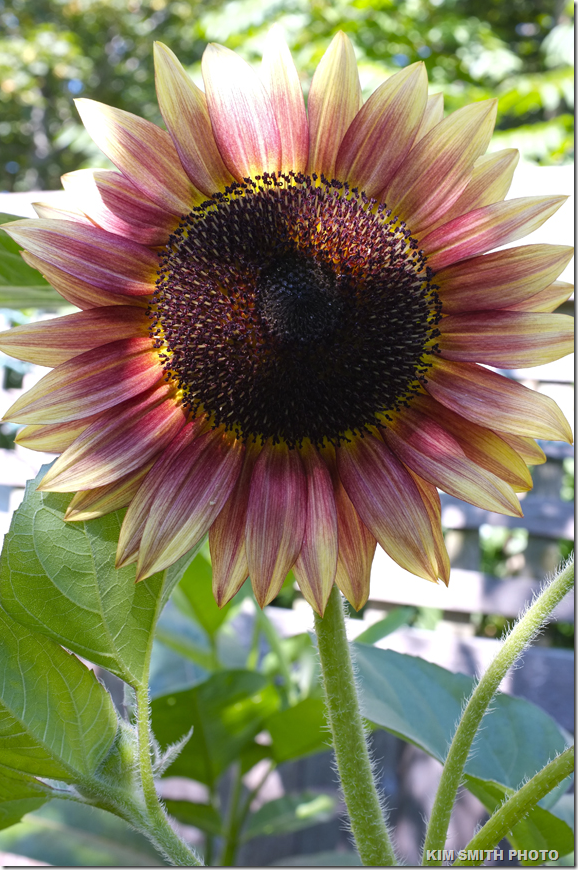