Here are some views across Annisquam River to A. Piatt Andrew bridge to show relative scale and position of the Annisquam River Dredging operation in February 2020. The Annisquam River dredging project began back in October 2019 and will continue into next year, however it’s not continuous. It’s overseen by the U.S. Army Corps of Engineers. The first dredging sections began in October 2019 (north of the 128 bridge, by Lobster Cove and Thurston Point), and will finish up next Friday (February 28, 2020), following two extensions. Dredging will resume sometime in the fall, likely October 2020.  They’re moving in the direction of the Cut right now. The operations run 24 hours a day with two 12 hour shifts. There are lots of local hires manning the rigs. Cessation by Friday is definite. “There won’t be a third extension because of the flounder spawning season,” says Paul Vitale, captaining one of the push boats for Patriot Marine, a Coastline Consulting sub-contractor.

The equipment you might see before they begin disappearing by the end of this week  are the following:

When the project is completed, the U.S. Army Corps of Engineers will remeasure and update charts. Buoys will be in new spots. But that’s still a long way off.  Fun facts: the scooped sediment was sandier by Thurston Point and muddier at the bend where they’re situated now. There are sensors and computers linked up on barges and scows for monitoring the dump runs, and future research and tracking. The grants obtained for this massive dig were written long before the March trio of storms struck Good Harbor Beach and Long Beach.

Closeup views from the barges and vessels courtesy photos below: 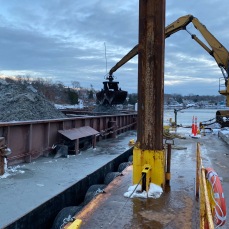 The U.S. Army Corps of Engineers, New England District is proposing to perform maintenance dredging of the Annisquam River Federal navigation project (FNP) in Gloucester, Massachusetts. The city of Gloucester is the local sponsor and requested this dredging.

“Natural shoaling processes have reduced available depths to as little as 1.0 foot in portions of the 8-foot MLLW channel and anchorage making navigation hazardous or impossible at lower stages of the tide,” said Project Manager Erika Mark, of the Corps’ New England District, Programs/Project Management Division in Concord, Mass. “Maintenance dredging of approximately 140,000 cubic yards of sand and some gravel from approximately 20 acres of the authorized project area will restore the FNP to authorized dimensions.”

A private contractor, under contract to the government, will use a mechanical dredge and scows to remove the material and then transport it for placement at the Ipswich Bay Nearshore Disposal Site (IBNDS) and the Gloucester Historic Disposal Site (GHDS). Approximately 132,500 cubic yards of sandy material will be placed at the IBNDS and the remaining 7,500 cubic years of sand and gravel material will go to the GHDS. Construction is expected to take between 3-4 months between Oct. 1, 2019 and March 15, 2020.

The public notice, with more detailed information, is available for review on the Corps website at http://www.nae.usace.army.mil/Missions/Navigation/Public-Notices/.