They really look after you

Over the weekend the Rockport Fire Department was called by a well-meaning person because they thought Mr. Swan was stuck in the ice. Believe me when I write that Mr. Swan has spent the last 29 years of his life (at least 29 years) on Cape Ann’s wintry waterways. If Mr. Swan finds himself partially frozen in the ice he uses his mighty breast to break up the ice by lifting his body out of the water and then coming down hard, pounding the ice with his chest. We have seen him do this powerful move dozens of times.

Notice Mr. Swan’s large and well-defined breast bones, which are ideal for breaking up ice.

There was a concern last year about him being unable to get off ice he had unwittingly flown onto, only because he had an injured foot. With his gimpy foot, he could not get a running start to take off flying. Mr. Swan’s foot has healed and he is doing beautifully.

It is of grave concern when the local authorities are called regarding Mr. Swan. We are afraid that the case will be referred to Mass Wildlife. Mute Swans are considered an invasive species and it is not part of their protocol to save non-native species of wildlife. As he is a “community” pet, some leeway may be permitted, but that is not guaranteed.

Please contact me at kimsmithdesigns@hotmail.com. When you contact me about any issues regarding Mr. Swan, I in turn contact and discuss with his longtime caretakers and friends Lois and Serena, Lyn, Skip, Joel and Skip, Elaine, and Jodi and Erin at Cape Ann Wildlife. It was a terrible ordeal last time there was an attempt to capture Mr. Swan. We don’t want him to go through that kind of trauma ever again, especially at his age.

During the winter months, Mr. Swan’s territory expands tremendously and it includes the length of the Annisquam River and all inlets, all along the backshore from Rockport Harbor to Gloucester Harbor, and all the fresh bodies of water in between. Please let people know and share this post with everyone you know who may have contact with Mr. Swan.

Mr. Swan in the partially frozen water at Niles Pond

Weather expert friends–what would you call this type of cloud formation? The first photo shows it best I think. Thank you for any information 🙂

Located on the Sterling and Francine Clark Art Institute campus, The Williamstown Art Conservation Center​ (WACC) is a non-profit institution that was established as the regional conservation center for New England by the US government back in 1977.

You can peruse the issue here or follow the link to explore a complete digitized repository of current and past issues. The WACC website URL is: www.williamstownart.org

Conservators at the center assessed the condition  and performed necessary triage because of the invaluable support from the city’s Community Preservation Act (CPA). CPA funding and Williamstown Art Conservation Center’s stature are inspiring endorsements for broadcasting the project and compelling additional financial support. As money is raised, every mural will have its necessary care regimen completed. Donations in support of the mural care can be sent c/o the Auditor’s Office, City of Gloucester, 9 Dale Avenue, Gloucester, MA (note mural restoration). All murals will be displayed in Gloucester as soon as their care is completed.

Sneak peek then and now:

The former Eastern Avenue School (85 Eastern Avenue) was the site for the monumental mural, Schooldays, by Frederick L. Stoddard, from 1936.  This multi-panel triptych was painted 8 feet high and nearly 60 feet long despite an array of unusual architectural challenges. My hunch for its original location on the main floor was confirmed thanks to Barbara Tarr. I’m looking for interior photos of the school that show the mural installed. Over time the school walls were resurfaced, doors blocked, and an elevator installed. Based on my expertise, I recognized that a stand alone piece was misattributed and must have been dispersed, not as bad as the scarecrow in the Wizard of Oz after the flying monkeys descend-… still it was dire and will be amazing to have it whole once again! Special thanks go to Gloucester’s Department of Public Works.

Gloucester Lyceum & Sawyer Free Public Library children’s services offers fantastic weekly programming. Zyla the Therapy Dog loves a good book! The next “Sign up to read” or sit with Zyla are January 29th, March 5th and May 14th. Looking ahead: there’s plenty of time to prepare for the annual Poetry Without Paper contest co-founded by Jon Ronan with Christy Russo, Director of Children’s Services. This year, national Poem in Pocket Day falls on April 25, 2019.

Some pictures from this morning’s live Facebook video and podcast. Nate Cahill showed us all around and answered all our questions with confidence and good humor. It’s shaping up to be a great space for work, research and networking. Contact Nate for a tour via this link to Wheelhouse. You won’t regret it!

The vault lock and door handle that Kim thought was so intriguing!

Who? Any RPS student who loves the ARTS!

Why? Do people keep taking your microphone away? Come to this event and find out why.  Listen carefully to the secret messages in our lyrics – or be brave and share some of your own!

What?  Student performances of music, art and dance

ALL Students and youth are invited to email us right now at:

rockportharmony@gmail.com to reserve a performance slot. Extraordinary talent NOT required! All material/lyrics must be family friendly and set lists must be approved by the student production team prior to the show.

Come hear what the buzz is all about!

Breakfast at Charlie’s Place and also see Martin in a Gerttyimage used for an article on Dogtown Common. 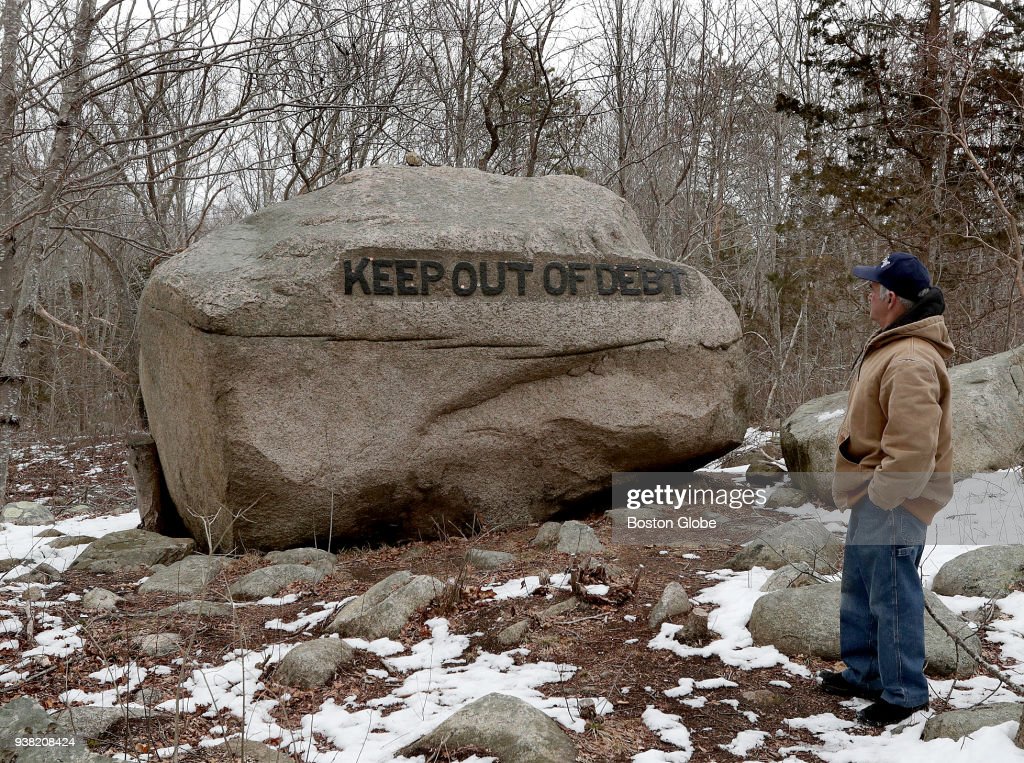 “A Plan To Keep Dogtown Wild And Free
GLOUCESTER, MA – MARCH 12: Kevin Martin checks out a Babson Boulder with a ‘Keep Out of Debt’ carving on Dogtown Common in Gloucester, MA on March 12, 2018. The area in Gloucester and Rockport known as Dogtown is hard to pin down. It is part historical site, part recreation area, and part rambling woodland. It is a place where mountain bikers ride rugged trails and history buffs come to explore the remains of Colonial-era homes. No matter how you see Dogtown, the land is an important local resource that needs to be protected, said Mary Ellen Lepionka, co-chair of the Gloucester Historical Commission and one of the leaders of an effort to have Dogtown listed on the National Register of Historic Places. (Photo by John Blanding/The Boston Globe via Getty Images)” Link

While going through my phone last night I found this photo from August.  It is always right about now that I begin to miss summer days.  These oilskins all lined up for a hard day at work definitely say Gloucester to me.

I caught a re-tweet from Sefatia Romeo Theken last night which contained very exciting news for Gloucester from Adventureman Jamie McDonald, who is running 6000 miles across the United States to raise money so that no child will have to forgo medical treatments due to financial concerns. He has decided to end his run right here in Gloucester, in part due to the fact that his hometown is Gloucester England.  At the moment, he thinks he might cross his finish line sometime in March. He’s on his way up the East Coast after starting in northwest Washington state.

You can follow him on this link as well as on Facebook by searching for Adventureman. Donations can be made at SuperheroFoundation.org. This is very exciting news for our city! Thanks to the Mayor for sharing the information!