At least, I think she is our Hedwig–Betty G. and Dave Fernandez, what do you think? Comparing photos from last winter, the feather patterning around her face looks to me identical.

With thanks and gratitude to Bob and Doug Ryan from Ryan and Wood Distilleries. Bob emailed yesterday afternoon that a Snowy Owl was being dive bombed by crows and gulls. I raced over and she had tucked in under the rocks at the base of a tree. 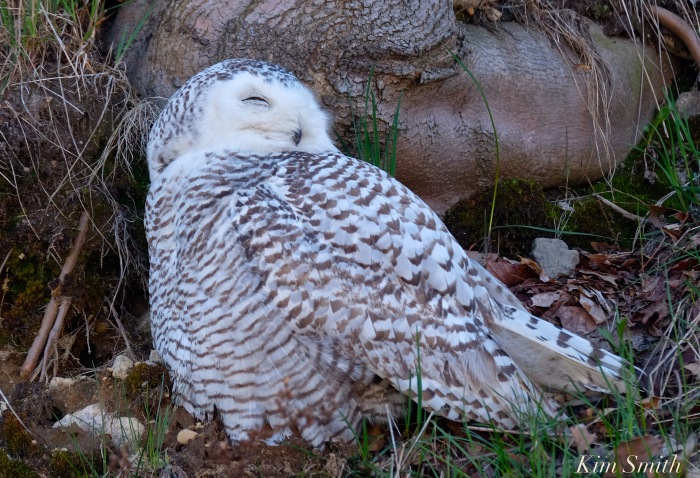 I took several photos and footage, and just as I had packed up to go, she flew to a large boulder. Immediately, within thirty seconds, a noisy flock of gulls were harassing her from overhead once again, and a few crows dove at her. She then flew to the nearest building. The crows and gulls pestered her for another fifteen minutes, while she quietly perched.

To write “return” is not entirely accurate. She was probably here all along. As soon as work began on the Atlantic Road hotel roofs, we no longer saw her at the back shore. I thought Hedwig might still be here last month, but wasn’t positive, and then Alicia wrote to say she had seen a Snowy and thought it could possibly be Hedwig. It was difficult to confirm without looking at closeups from a long lens. I searched around Alicia’s location for several days but could not find.

Considering most Snowies have left Massachusetts by April, it’s wonderful to have a record of her here in Gloucester in early May. I am elated, and grateful, to Bob and Doug for the call, because now we have footage of her in a rocky woodland Cape Ann setting! Thank you, thank you!

One thought on “THE RETURN OF OUR SNOWY OWL HEDWIG!!!”