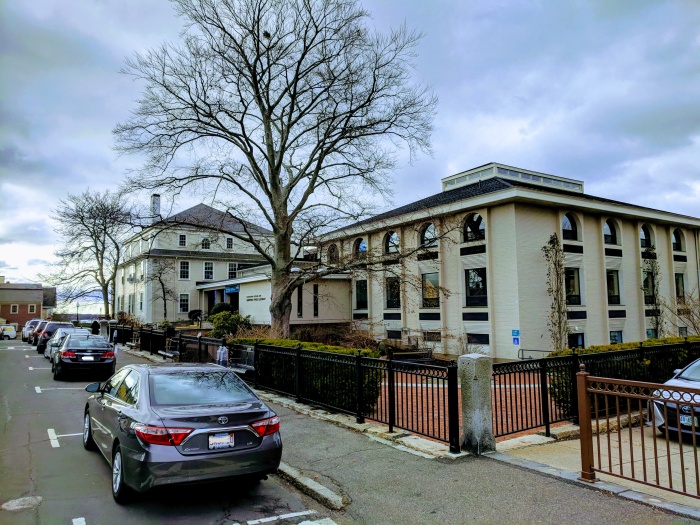 For your review – summary and scenes from the November 15, 2018 public meeting and recent headlines:

Approximately fifty attendees –including the library board and staff plus eight consultants from the firm, Dore & Whittier Project Management and Architecture— convened on the main floor of Gloucester Lyceum & Sawyer Free Public Library on November 15, 2018. Individuals from the Historical commission, Action Inc, Saunders House, Gloucester Green, a local middle school teacher, a Varian employee, library members and 3 teenagers were present.

I believe the light attendance was due to a feeling of repetition. The public meeting was billed as an opportunity to provide feedback to the library yet again. It turns out that the gathering was a required step in the next phase of the library building plans and as such was presented to be starting from square one. No matter how one tries to paint it, it’s not square one. “This is just a necessary step,” the consultants explained. “”It doesn’t matter.”

Since 2013, the library has facilitated and hired consultants to help with public forums related to the building and future plans. (Public and committee meetings, agendas, minutes, and strategic planning are requirements for grants and funding, not to mention big pursuits like new buildings or restoration). It is disconcerting that years of prior and extensive staff and public feedback are not aggregated and readied by the library board nor contracted consultants–especially as several in attendance were present at the January 11, 2017 meeting attended by 150+ that sent the building plans back to the drawing board.

That contentious January 2017 meeting was preceded by the corporators* meeting two weeks prior where feedback recommended recording and sharing public comments for transparency and efficiency and many of the same concerns were expressed.

*I am a library corporator and can attest that project updates have not been shared (albeit annual meetings) Corporators are a devoted library audience and might help.

In between the timing of that big 2017 meeting and this small 2018 one, the library pursued forums via ThinkGloucester facilitated by Gloucester Conversations for its strategic planning. At those forums, the library indicated that  results would be shared in the fall of 2018. I was not the only one expecting those results linked on the homepage and printed out for the November 15th meeting. They weren’t. Following the meeting, a board member kindly shared the findings: Sawyer Free Library thinkGloucester Project Report_final 2018

State funding support for library buildings is guided by the Massachusetts Board of Library Commissioners ( MBLC). In part because of the state’s toolkit funding process, the November 2018 meeting became a fresh start and first step, Phase 1. I was told that the architects and designers needed to hear feedback “first hand” which is reasonable until you establish that yes in fact most of them had been at that most well attended public meeting to date mentioned above (2017), and have been engaged by the library and worked with the library committees for years. Although that money is disassociated as part of the MBLC toolkit next phase, each purchase order (PO) for marketing/public relations (PR) and phases towards new building plans can affect the library’s bottom line, and take years.  When I find them, I will link to the library’s letter of intent, a list of costs for consulting to date (phases or not), building related work, marketing completed since 2013, and for the fine art removed.

In 2013 top concerns included new bathrooms, more staff, the Saunders building, art & archives, and the HVAC systems. Here we are six years later: I can say there has been no change in the bathrooms. The library needs more staff. Voices to preserve the John and Dorothy Rando memorial garden have arisen. The teenagers at the November meeting hoped for new lighting. Perhaps that’s an easy renovation. After six years, the library may have saved some money and developed outreach by conducting a local design competition, fixing the bathroom, and hiring staff. We may have move forward together to MBLC instead of what feels like a never ending “stage one”.

MBLC supports new builds that adhere to a best practice formula and adjusts as no two libraries or communities are exactly the same. For instance, specific additional square footage from a current footprint, varied “programmable” spaces, adequate parking and public input are guidelines. I would suggest that money be spent on clerks/recorders for the public meetings and the library should insist on that from their consultants (whether Dore &Whittier or not). I would hope that new input at every stage continues to be updated and evaluated. Why is the focus on “green” LEED not parsing the MBLC parking spaces requirements? The Boston Public Library did away with them–we should expect no less. Some rural or smaller communities may need larger library builds and new visions to create a statement cultural public gathering spot where there hasn’t been one. (Although I think that’s unlikely in MA.) Our extant library has a variety of gathering spaces. And Gloucester is blessed with an abundance of large, special public spaces that work in concert with the library. City Hall, Cape Ann Museum, Temple Ahavat Achim, the YMCA, and the Gloucester Meetinghouse UU Church are essentially library abutters and can pack hundreds.  The Legion, Rose Baker Senior Center and Maritime Gloucester are short blocks away. The library can move events to off-site locations when and if it’s mutually rewarding. Mostly it does OK in house. Gloucester’s population hovers 30,000 which is the same as it was at the time of the last expansion. Does our population require more space? According to sources in the paper and the meeting, the building plans remain many years out.  The Massachusetts funding model has decreased and according to the MBLC press release issued Nov 2018, “The longer a community goes without being able to start its project, the higher the construction costs will be.” At what point do the costs outweigh options like renting if building lifespans are warrantied to a few decades expectancy? If the process requires construction this costly, perhaps the state can reimburse communities more money, quicker, and/or develop other models?

You can read a range of reactions to the library’s November 15, 2018 meeting in an article by Ray Lamont in the Gloucester Daily Times: Sawyer Free Library plans still unclear,  November 19, 2018 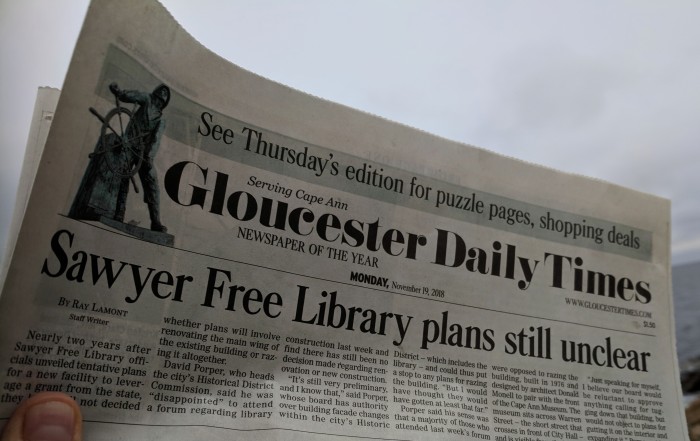 And a follow up article Library debate: to raze or expand. Decisions needed before state funding kicks in, by Ray Lamont, Gloucester Daily Times, November 29, 2018 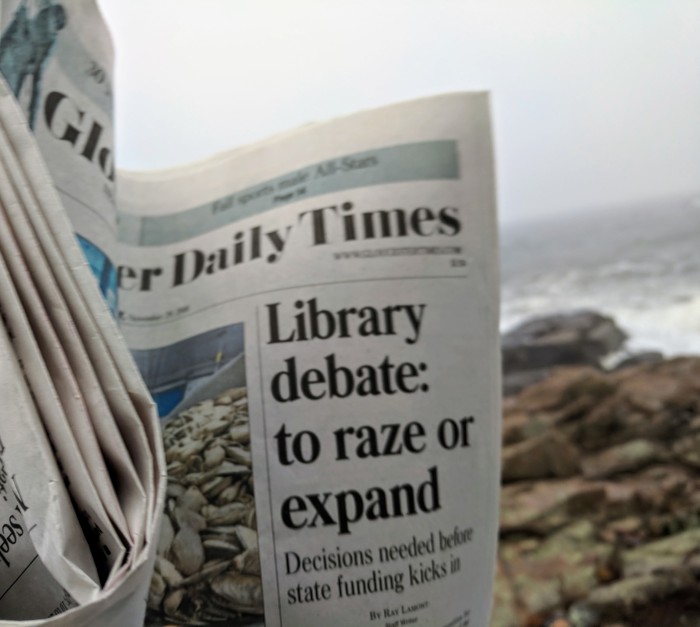 Dore & Whittier was awarded the 197 million Newton North high school design and build, and multiple MBLC and MSBA contracts for the City of Gloucester. Here is a link to the complete project list published on their website (and photos below). You’ll need to go back and forth among the awarded category projects to separate work by town. (For instance, West Parish is listed but does not indicate “Gloucester” and the library work does not appear). The state sites don’t aggregate all phases either. The Massachusetts school PO status from March 2018 lists 3 awards: the East Gloucester Elementary School study, the GHS roof repair and the West Parish build. 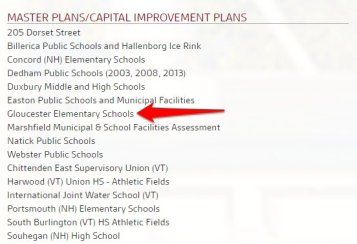 The current website does not have a “button” or menu selection for new building plans. You can select from the calendar to see some of the meetings announced. You can select About to explore more about the board committees and some minutes and agendas. Some meetings are linked into the City of Gloucester calendar, too.

Round up of new library building coverage prior to November 2018:

Meeting agenda (no minutes on line), 1.Call to order, welcome and introductions.

2. Review IRS1023 application for Samuel Sawyer Foundation
Outcome of recruitment efforts for the officers of the board
Bylaws
Mission statement and narrative description

3. MOU with Library Corporation
Fiscal sponsor agreement, Gift or grant, or Gift with a reverter
Roles and responsibilities of all parties to insure coordinated action