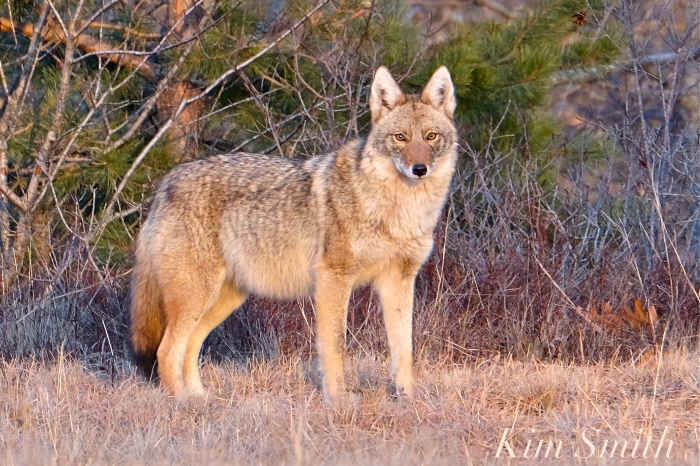 Please be on alert for a pair of very bold coyotes in the neighborhood. Over the weekend I was standing with a group of photographer friends and we were noticing the coyotes along the edge of a field. The coyotes ducked behind the shrubby growth and soon after, my friends left. I became distracted and forgot about the coyotes while photographing a chatty little Downy Woodpecker. Without warning, the coyotes were suddenly quite near, within twenty feet. I yelled and clapped loudly, which did not in the least intimidate one of the pair. The smaller trotted a few steps back toward the woodland edge while the larger one started to dig in the ground, similar to a bull marking his territory. It was more than a little eerie, and while yelling I began to walk backwards off the field.

When a gentleman came to the field to walk his dog, the coyotes headed back towards the shrubs. Reappearing a few minutes later, they had circled around in the shrubs and began to stalk the leashed dog. I walked towards the man to give the coyotes the idea that we were a group and they didn’t come any closer after that. This post is not meant to alarm anyone, but to let you know that we have some very hungry coyotes in our midst; I had the oddest sensation that they had an expectation of dinner. I sure do hope no one is feeding them.

The bolder coyote is on the left in the above photo. You can see in the middle photo in the first row that the bolder one’s coat is darker (also on the left).