How did you do? Week two delved into scenes of historic battles. I’ve added some background. Stop here if you prefer to go back to see Week 2 questions only from 3/17/19

*“In 1623, 14 English fishermen set up the first European colony on Cape Ann here in what was then Fisherman’s Field and is now Stage Fort Park. These ramparts overlook the harbor, first built during the Revolutionary War, renewed for the War of 1812, the Civil War and the Spanish American War. Alas, those first settlers, sent across the ocean by the Dorchester Company, were unable to live off the sea and these rock-bound fields. They moved a few miles south to what is now Salem in 1626. Then, within a decade, there were enough permanent settlers on Cape Ann to incorporate the town of Gloucester. The first meetinghouse was built on the Town Green in 1642 near what is now the Grant Circle rotary of Route 128. The City set this land aside as a public park in 1898 and its Tablet Rock was dedicated by Henry Cabot Lodge in 1907.  James R. Pringle was designated to write the inscription for the bronze plaque. The execution of the design was by Eric Pape. “The nautical scheme of decorative framework and embellishment was the composite suggestion” of various committees dating as far back as the 1880s.” *see Gloucester HarborWalk Stage Fort Park marker #42  photo on marker ©Sharon Lowe. See also Stage Fort Park then/now photos in prior GMG post

Bronze tribute plaques embedded in Tablet Rock at Stage Fort Park detail the site’s history and were commissioned and unveiled at different times. The monumental and stunning Founders plaque from 1907 on Tablet Rock itself is in fantastic condition. Two DAR plaques were inlaid on the glacial outcroppings past half moon beach on the way to the cannons. The Fisherman’s Field (ca.1930) is so worn it’s nearly indecipherable, though that’s part of its charm. The plaque compels close inspection, lingering and discovery. It’s a fun family activity for anyone who likes a challenge. For those who want help reading the content, I transcribed it back in 2010. Scroll down below the “read more” break in this post to open. 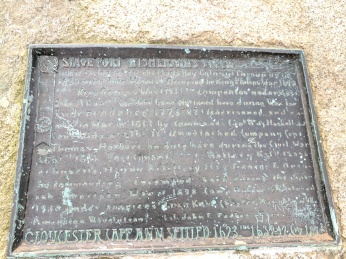 Stage Fort Fisherman’s Field plaque honoring all actions. My attribution is Harriet Hyatt_plaque refers to restoration of area 1930 by DAR 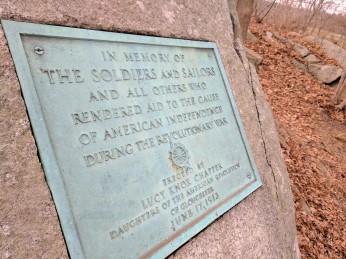 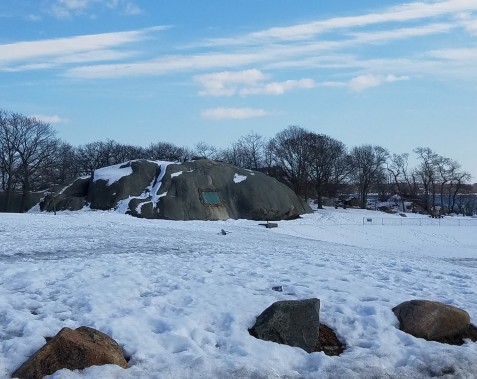 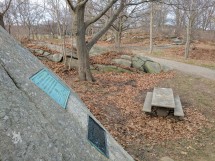 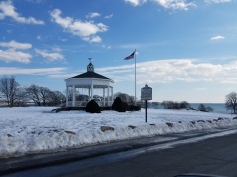 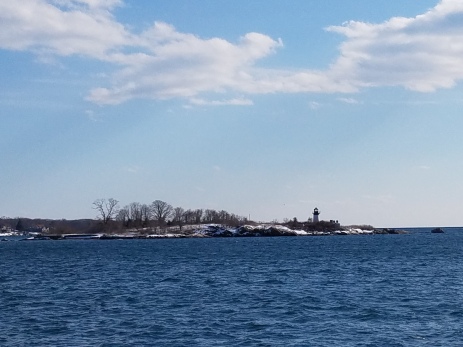 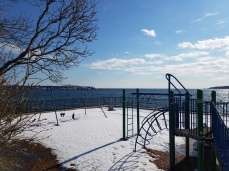 “In 1743, what is known as the old fort on Commercial Street, now encroached upon and surrounded by buildings, was completed. On this point, well selected strategically, is a hill which effectually commands the inner harbor. In 1742 and 1742, the General Court appropriated 527 pounds to defray the cost of fortification. Breastworks were thrown up and eight 12-pounders placed in position in the fort. The immediate cause of its erection was the fear of French incursions, but these fears were never realized. An effort had been made as early as 1703 to fortify the place, but the petition of the selectmen to the General Court for an appropriation for the purpose was refused. The petition shows that he harbor, even at that early date was extensively frequent for shelter, and was “very seldom free from vessels.”

“In order to be better prepared for future assaults breastworks were thrown up at Stage Fort, the Cut, Duncan’s Point and Fort Point. This, however was the last attack by sea or land that the people experienced.”

“Immediate action was taken toward the erection of fortifications. Land at Eastern Point, belonging to Thomas Niles was acquired by the government, and earthwork fort erected and manned…” 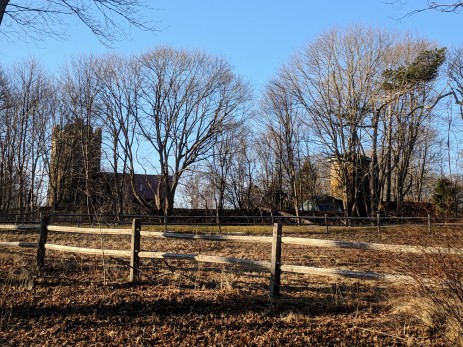