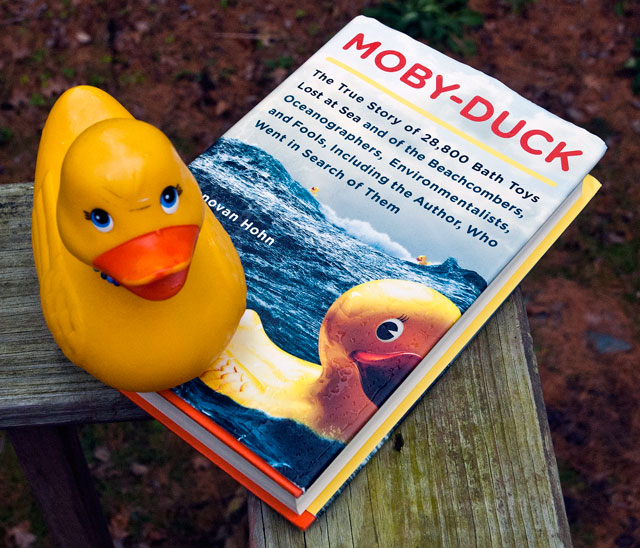 After finishing Moby-Duck by Donovan Hohn I give it 5 Rubber Ducks. Perfect stocking stuffer for the Good Morning Gloucester Friends of Rubber Duck (GMGFORD). A spellbinding journey that leapfrogs (see green frogs below) across the world searching for  the illusive Rubber Duck. The Gloucester Bookstore and Toad Hall in Rockport have been told to stock this book.

First the technicalities: On the night of January 10, 1992, an enormous container ship from China, crossing the north Pacific, ran into a storm and eventually lost several tractor trailer sized containers to the sea. This actually happens quite often and some people get their kicks hunting down Adidas sneakers, or the ten thousand catcher’s mitts or hockey sticks that bob to the surface after the ocean pops the container open. But on this Friday night the cargo was 7,200 cartons of bath toys containing a green frog, a blue turtle, a red beaver, and, wait for it, a rubber duck (This makes 28,800 floating bath toys.). But forget those other toys, we focus on the 7,200 Rubber Ducks. These Rubber Ducks are just like the GMG Rubber Duck. Born in a blow mold in China. Our Rubber Duck made the trip safely much earlier. Her container ship pulled into Seattle in 1984, was offloaded to a truck destined for Shelcore Inc in Somerset, New Jersey. It then was sent to a novelty shop on Cape Ann where David Platt of Rockport purchased it to decorate the bathroom. For fifteen years Rubber Duck left a sheltered life before she met Homie the Seagull down on Granite Pier and we all know where that part of the story has ended up …

But back to the roaming 7,200 rubber ducks. Donovan Hohn read an article about them and the search for information took over his life from 2005 to 2008. One month he would be pulling a red beaver off the beach of an Alaskan Island, the next month he would be on an ice breaker travelling the northwest passage above Canada. Along the way Donovan learns a lot about ocean currents, maritime regulations, the weather, the climate, the sailor Ishmael of Moby Dick fame, as well as how to be a father.

He meets a lot of people, most of whom think he is a bit daft, “Has thou seen the White Whale?”  “Has thou seen the Rubber Duck?”  A page turner to the end, you will find yourself a bit more knowledgable about the ocean after having read it. Do you know about the great gyre, the garbage patch, swirling in the Pacific to the North of Hawaii? I thought I did but was surprised that the real floating dead zone of plastic is much different than what is reported. Hohn brings no agenda to his search for the Rubber Duck. He started with a simple question, did a Rubber Duck really go through the Bering Strait, up over the Northwest passage, and land on a beach in England? In the end, it isn’t the answer, but the journey that matters, and we all learn a lot by tagging along.