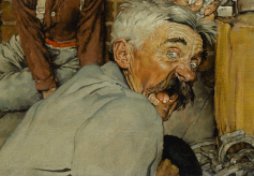 Cy pres petition it is! The Berkshire Museum had to demonstrate dire financial need to modify any restrictions on charter or mission, like selling its priceless art core and renovating its landmark building else risk withering and shuttering. Well, the museum has succeeded to the next round according to its website. Here’s their summary of the agreement between the Berkshire Museum and the Attorney General Office that was sent to the Single Justice Court. I have not seen a release from the AGO, yet. I’ll link to the actual document(s) soon.

Generally after a filing is ready to be reviewed, there are a couple of route options for a Single Justice. The SJO can act on the filed papers, order a hearing, or pass it back to the full court. What will the SJO decide with this one?

The Museum’s summary reads like a slam dunk for the Berkshire Museum New Vision position. An unnamed American Museum will acquire Norman Rockwell Shuffleton’s Barbershop at an undisclosed price (which should have been negotiated high enough to cover all fundraising goals if it was to happen at all. Public auction would have gone higher.) Regardless, whatever sale price was set, that purchase does not preclude further sales according to the light conditions. I suspect that’s to appease Sotheby’s, in possession of all the art and waiting for this to sort out.

Sotheby’s would rather auction that Rockwell. The Rockwell family is not part of this agreement, and was waiting to review the papers as it impacts their suit vs. the museum.

Which museum committed funds for Shuffleton Barbershop and can pounce? Lucas Museum of Narrative Art could be a contender: George Lucas and Steven Spielberg are major Rockwell collectors.  Perhaps Crystal Bridges Museum backed by Wal-Mart heiress, Alice Walton, strikes again. Both were two likely clients at Sotheby’s, too. The reputation and value of the art targeted for sale will continue to rise. Legal firms, auction houses, and collectors are poised and AGOs across the country are trending pro boards and trustee, since 2000. The leadership at the Berkshire Museum failed to raise its own money for its new vision, was unable to brand despite possessing masterpieces, celebrate its landmark building, and imagine innovative science and history programming built around Calders and Rockwells. Let’s give them more money and the art, too?

I wonder if there is a percentage of SJO decisions opposing agreements like this one, overturning a lower court ruling and now a proposed agreement with the AGO-state? The February 5th joint statement confirmed that the Berkshire Museum and AGO were at an impasse related to standing. Come on SJO!

Embargoed for release
4:30 p.m. FRIDAY, FEBRUARY 9, 2018
SUMMARY
The Office of the Attorney General (AGO) and the Berkshire Museum have filed a petition
with the Supreme Judicial Court of the Commonwealth of Massachusetts seeking approval
of the following agreement to end litigation between the AGO and the Museum.
With this agreement, the AGO and the museum jointly recognize:
• A shared responsibility for the collection of the Berkshire Museum and to the
community it serves;
• The Berkshire Museum faces serious financial challenges including a dwindling
endowment, a weakening fundraising climate, and an annual operating deficit of
$1.15 million—that will force it to close within the next several years absent a
substantial infusion of capital of approximately $60 million;
• Fundraising alone will not be sufficient to generate the capital necessary to ensure
the Museum’s survival;
• The AG’s Office, through its investigation, determined that the Berkshire Museum
met its demonstrated financial need to deaccession assets;
• A two-year Master Planning Process, including extensive input from hundreds of
members of the community, financial guidance from a respected non-profit
consultant, and consideration of alternatives to deaccession, led to development of a
plan that will allow the Museum to continue fulfilling its mission;
• A shared commitment to ensure public access, especially in the Berkshires, to
Norman Rockwell’s Shuffleton’s Barbershop;
• The AGO believes court review is necessary before any sale, and the Museum has
filed a cy pres petition with the Supreme Judicial Court; and
• The importance of finding a solution that will help this community resolve its
differences.
Key terms of the agreement:
• The Museum filed a cy pres petition, to which the AG’s Office assented, filed with the
Supreme Judicial Court today, which outlines the terms of the settlement.
• If approved by the SJC, the Berkshire Museum will be authorized to sell art works to
meet its financial need , with the agreement structured so that the Museum may
reach its financial goal without necessarily selling all 40 works.
o This authority extends to the 19 items the museum acquired before 1932.
• The Berkshire Museum can structure the sale of these works in an effort to raise up
to $55 million, specifically:
o $50 million of the net proceeds to the Museum may be used by the Museum
without restriction;
020918
o Net proceeds between $50 – $55 million will be held by the Museum in a separate
fund for the benefit of the Museum’s collection and to be used for acquisitions
and to support the Museum’s collection, including in connection with the New
Vision;
o Any net proceeds that exceed $55 million will be held by the Museum in a
separate fund for the benefit of the Museum’s art collection and to be used for
acquisitions and to support the Museum’s art collection, including in connection
with the New Vision.
• A non-profit U.S. museum has made an offer, obtained by the museum with the
support of the AGO, to purchase Shuffleton’s Barbershop with conditions ensuring
the work will remain in public view, including:
o Within 120 days of finalizing the acquisition of Shuffleton’s Barbershop, the
buyer will initiate a loan of the work to the Norman Rockwell Museum for a
period of 18-24 months;
o Following the loan to the Norman Rockwell Museum, the buyer will explore
the possibility of loaning Shuffleton’s Barbershop to other museums in the
Commonwealth of Massachusetts, such as the Museum of Fine Arts in Boston
or the Worcester Art Museum;
o The buyer will ultimately display Shuffleton’s Barbershop in a place of
prominence within its museum and will consider periodically loaning the
work to museums in Berkshire County and to museums in the United States and
around the world.
• The remaining works will be sold in three groups, or tranches, as determined by the
museum, until the museum receives $55 million in net proceeds, including the net
proceeds from Shuffleton’s Barbershop;
o This means the Museum may not need to sell all 40 deaccessioned works; and,
o The Museum can sell these works in private sale, even for a lower price than
would be received through public auction, if that means these works will be
accessible to the public.