All are invited to have fun, join in, share ideas for Gloucester’s 400th Anniversary possible celebrations in 2023. A public meeting will be held at City Hall on Saturday, April 28, 2018 from 1-3pm. Can’t attend? Email your input to the 400th steering committee: email gloucester400@gmail.com  and check out the 400th Anniversary Facebook page For More Info

“Although Gloucester’s 400th Anniversary is five years away, we know that those years will go by quickly.  400 years deserves a year long celebration in 2023 and a steering committee has been meeting for the last six or seven months to get the process started. Three Captains have been chosen to lead the group:  Bruce Tobey, Bob Gillis and Ruth Pino. The Committee is sponsoring a public meeting on Saturday April 28, 2018 in City Hall Auditorium…What should happen during 2023? What would you participate in? What would you miss if it didn’t happen?”

With so much advance notice, it’s fun to ruminate. Three words come quickly to mind for one idea: Virginia Lee Burton. Burton was one of the most influential children’s book author-illustrators of the 20th century and Folly Cove textile designer and founder. She received the Caldecott medal in 1943 for The Little House. Whether for the 400th Anniversary or not, I hope one day that there are tribute commissions for Virginia Lee Burton’s beloved characters Katy from Katy and the Big Snow and Mary Ann from Mike Mulligan and His Steam Shovel at Stage Fort playground.  Life Story and Song of Robin Hood were also informed by landscape and her life in Gloucester. (The Burton tributes could be massive, interactive and accessible bronze sculptures. Tom Otterness commissions were completed at this scale. Why not Burton? They don’t have to be. Also bring back the monumental sea serpent and the big truck. These memorable imaginative expressions were wood in the past and maintained for years. Perhaps they could be recreated with modern decking materials. And add in Burton’s Little House! ) 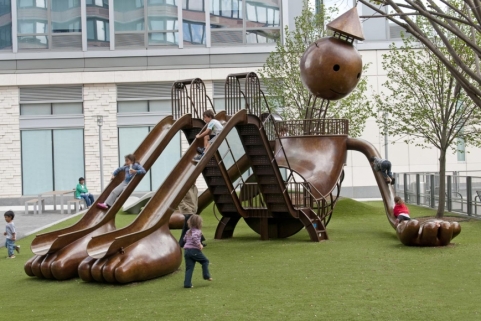 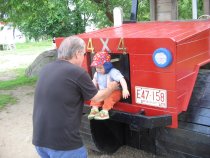 Gloucester has a history of producing major anniversary celebrations which makes looking back through archives* inspiring for future plans. Here are a few I’ve pulled:

On May 21, 1923, the Gloucester Daily Times published an article about the appropriations and planning for the city’s 300th Anniversary which is remarkable in content and its late date–the celebration was just months away!  The idea itself and related costs concerning a public art commission –the one that would become Gloucester’s renowned Fisherman at the Wheel Memorial– were hammered out at a heated City Council meeting. Here’s the nearly complete transcription:

After three hours of discussion and a conference of the municipal council behind closed doors lasting about three-quarters of an hour on Saturday evening, it was voted to reconsider their action whereby the $10,000 appropriated for the anniversary committee should be alloted for a permanent memorial and voted for _____ committee to expend a sum not exceeding $5000 for the celebration, and the other $5000 to be used for the creation of a permanent memorial.

The agreement as finally reached is ______________ provide for the dedication in whole or in part of a permanent memorial to be erected and paid for jointly by the _______ city of Gloucester. “The municipal council agrees that a sum of $5000 of the amount appropriated by the city for the celebration will be for the general purposes of the committee if necessary, with the understanding that all expensea for additional police protection incurred by the  committee on public safety will be paid for by the anniversary committee. And with the further understanding that the anniversary committee will do all possible to have this sum of money applied to the permanent memorial in addition to the sum reserved ____ by the municipal _____ surplus after the celebration is over, this surplus also to be for the purpose of a permanent memorial.” The meeting opened at 8.15 o’clock, with a reading of the records by Secretary Harold H. Parsons, and following this there came without hesitation_____ ing of the celebration from those present, and for a time, one was reminded of the old town meeting days. ___________ A Piatt Andrew ___________ carnival parade by members of the art colony of the city were accepted and adopted.

Plain Talk by Chairman Barrett-  Chairman Barrett then arose and addressed the members present and said: “I sent a communication to the municipal council some time ago to find out just what standing this celebration had with them. The letter I received was not

END_OF_DOCUMENT_TOKEN_TO_BE_REPLACED

Two photos attached. The first is "Red Roof" on Eastern Point taken from the "Ardelle in 2012." This was the home of A. Piatt Andrew – for whom the Route 128 bridge is named. He was an under secretary of the Treasury. Red Roof  was demolished on December 14, 2012. The second photo is of "Red Roof Redux,"  the new house, taken from the "Thomas Lannon" on Sunday. The wing to the left and the stone work in front of the house were retained. 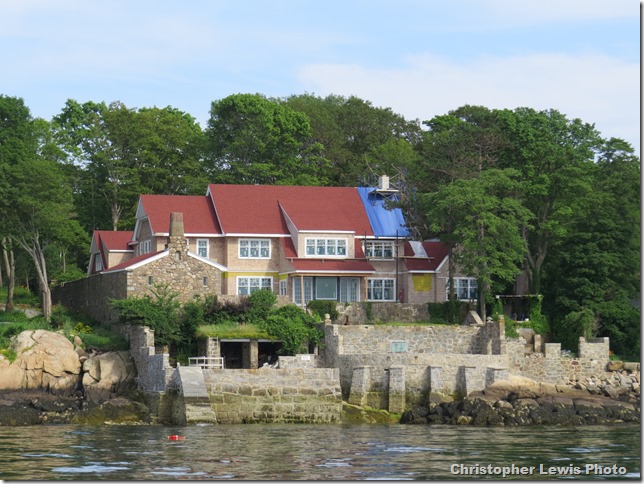