The sweet Lark Sparrow has been spotted daily at Eastern Point now for over two weeks. I’ve been able to take a longer look on a sunny day and think he is an immature Lark Sparrow because he lacks the rich chestnut color of an adult.

On one fine chilly, chilly morning, he even let me spend more than a few moments watching as he dozed in the sun while puffing his feathers for warmth. 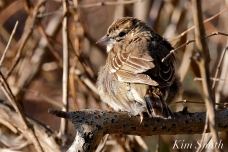 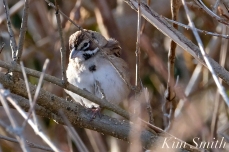 The Lark Sparrow spends a good deal of time foraging on the ground for tiny seeds. When disturbed, he flies up into the trees and at that moment you can catch a glimpse of the white outlined feathers of the bird’s long rounded tail. Lark Sparrow tail feathers

Unlike Song Sparrows that dart and zoom horizontally across the landscape, when heading to the next location, the Lark Sparrow flies upward in more of a whirring helicopter movement. I love this little bird and if he stays all winter I hope he will find plenty of seeds to eat. 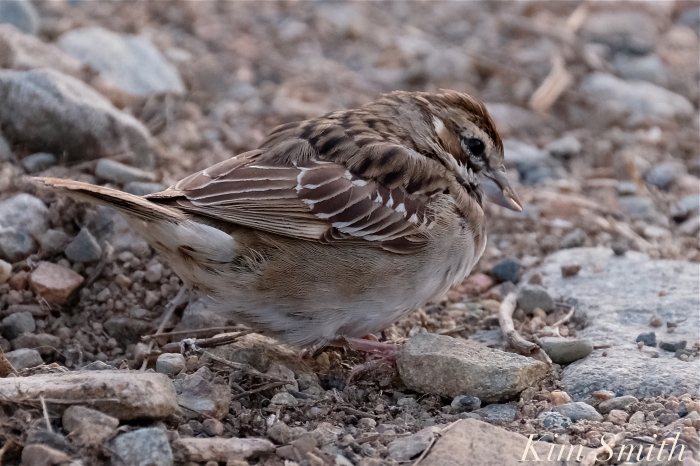 Don’t you find it fascinating, these avian visitors that are so far off course that find themselves on our shores? Here’s an account from 1905 —

The Lark Sparrow in Massachusetts.– On August 12, 1905, at Ipswich, Massachusetts, I observed at close range a Lark Sparrow (Chondesres grammacus). This makes the sixth record of this species for the State, and the fourth for Essex County. Nearly a year before this, on August 21, 1904, I took at Ipswich an adult male Lark Sparrow (Birds [Auk 104 General Notes. I. Jan. of Essex County, p. 268). It has occurred to me that stragglers in the migrations along our Eastern Coast may not be so very rare, but that they are overlooked, being mistaken for Vesper Sparrows, owing to the ‘white outer tail feathers. In both of the above instances, however, the slightly fan-shaped tail, and the fact that the white was not confined to the two outer feathers, as in the Vesper Sparrow, attracted my eye. The characteristic marking on the side of the head in the Lark Sparrow, seen with a glass within thirty feet, made the diagnosis in the second ca. From the Supplement to the Birds of Essex County by Charles Wendell Townsend. 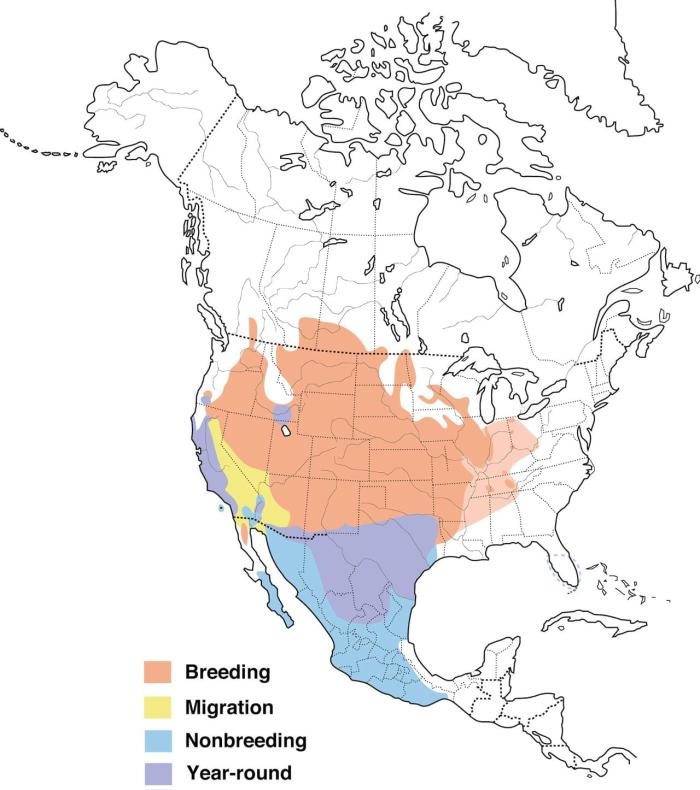 4 thoughts on “THE RARELY SEEN IN MASSACHUSETTS LARK SPARROW IS STILL WITH US!”