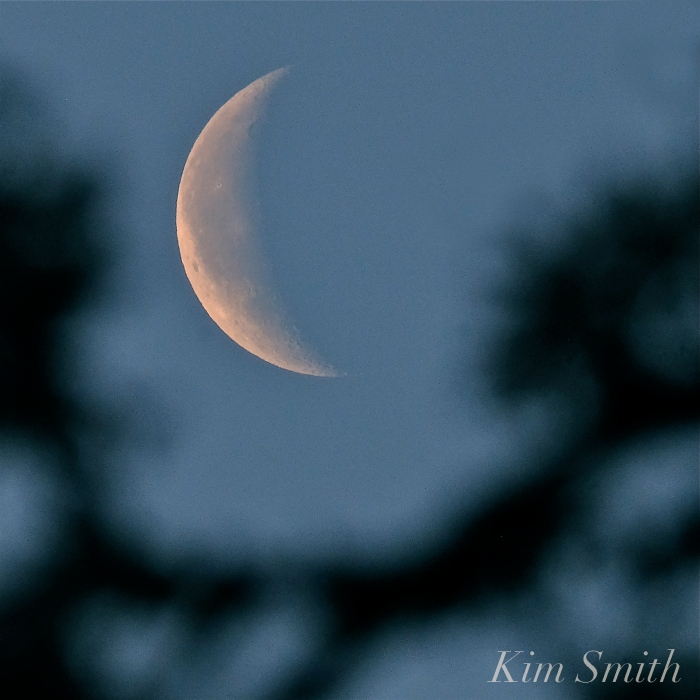 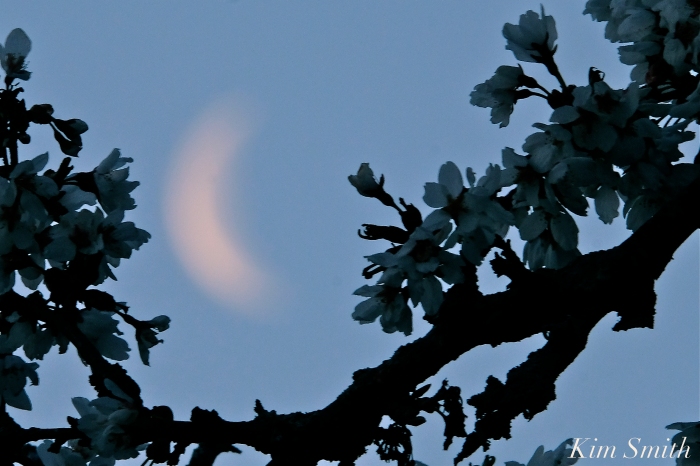 Cape Ann Symphony finishes the orchestra’s 67th Concert Season on Saturday, May 18 at 7:30 pm at the Manchester-Essex High School Auditorium on 36 Lincoln Street in Manchester-by-the-Sea, MA and on Sunday, May 19 at 2 pm at the Dolan Performing Arts Center at Ipswich High School on 134 High Street, Ipswich, MA with From the New World and Beyond featuring BSO violinist Lucia Lin and BSO cellist Owen Young, and composers Miklos Rozsa and Antonin Dvorak. Cape Ann Symphony Music Director and Conductor  Yoichi Udagwa looks forward to this exciting program, “We are closing our 67th Season with Antonin Dvorak’s ever popularNew World Symphony and two works by Miklós Rózsa – the Parade of the Charioteers from the Academy Award winning score for the acclaimed major motion picture Ben Hur and Sinfonia Concertante for Violin, Cello and Orchestra. Violinist Lucia Lin and cellist Owen Young will be the soloists. Rózsa’s Sinfonia Concertante is an incredible work of virtuosity for the soloists and orchestra alike, and it is full of gorgeous melodies and fascinating harmonies. As it’s probably not familiar, we will introduce the music with some short examples/explanations. I know our audiences will love this music!”

In 1931 the then unknown composer Miklós Rózsa and his friend the esteemed Swiss composer Arthur Honegger presented an evening of chamber music in Paris, France, Honegger’s birthplace and home for most of his life. They played Rózsa’s Sonata for Two Violins and Honegger’s Sonata for Two Violins and some of Rózsa’s piano pieces. The evening was a great success with the audience. However, when Honegger said they earned $15; Rózsa declared, “Is that all? I am young; nobody knows me in Paris. But you’re a great master. How do you make a living?” Honeger replied: “I write film music.” Honegger composed over 23 film soundtracks during his career. Soon after that concert, Rózsa moved to Hollywood, and went on to produce scores for 96 films. He was nominated for an Academy Award for Best Original Score seventeen times and won the coveted award three times: 1946 for Spellbound, 1948 for ADouble Life and 1960 for Ben Hur. CAS Conductor Udagawa points out,” The orchestra will play The Parade of the Charioteers from the Ben Hur score. Many CAS audience members will recognize this iconic music from the hit film. It will be tremendously exciting to play such a majestic piece live for CAS audiences.”

Rózsa’s first major classical success was his Theme, Variations, and Finale, Op. 13, for orchestra which was premiered in Duisburg, Germany, in 1934. It was performed in Europe by Charles Munch, Karl Böhm, Bruno Walter and Hans Swarowsky, and in America by the Chicago Symphony Orchestra under Hans Lange and the New York Philharmonic under Leonard Bernstein. One of Rózsa’s most renowned concert scores is his Sinfonia Concertante for Violin, Cello and Orchestra , the piece which Cape Ann Symphony will play with guest artists violinist Lucia Lin and cellist Owen Young.

Lucia Lin made her debut performing Mendelssohn’s Violin Concerto with the Chicago Symphony Orchestra at the age of 11. Since then, she has been a prizewinner of numerous competitions, including the 1990 International Tchaikovsky Competition in Moscow. She has performed many solo recitals for the Cape Ann Symphony and throughout the U.S., making her New York debut at Carnegie Recital Hall in March 1991, and has appeared with the Boston Pops Orchestra, St. Louis Symphony Orchestra, Oklahoma Symphony Orchestra, Cincinnati Chamber Orchestra and Festival Orchestra in Graz, Austria. Ms. Lin is a member of the Muir String Quartet, the quartet in residence at Boston University. She is also a founding member of the Boston Trio and the chamber group Innuendo. Ms. Lin joined the Boston Symphony Orchestra in 1985 and served as assistant concertmaster from 1988 to 1991 and 1996 to 98.

Cellist Owen Young joined the BSO in August 1991. He is a frequent collaborator in chamber music concerts and festivals; he has also appeared as concerto soloist with numerous orchestras. One of the Cape Ann Symphony’s regular soloists, he also has appeared in the Tanglewood, Aspen, Banff, Davos, Sunflower, Gateway, Brevard, and St. Barth’s music festivals and is a founding member of the innovative chamber ensemble Innuendo. He has performed frequently with singer/songwriter James Taylor, including the nationally televised concert “James Taylor Live at the Beacon Theatre” in New York City. Mr. Young was formerly on the faculties of the Boston Conservatory, the New England Conservatory Extension Division, and the Longy School of Music; is currently on the faculty of Berklee College of Music; and is active in Project STEP (String Training and Education Program for students of color)

Founded in Gloucester in 1951, the Cape Ann Symphony is a professional orchestra of over 70 players from throughout the New England area. They perform a subscription season of four concerts per year plus several Pops and youth concerts. The Symphony Board of Directors named Yoichi Udagawa the Music Director and Conductor of the Cape Ann Symphony in the summer of 2000 after a yearlong search. In addition to his leadership of Cape Ann Symphony, he is Music Director and Conductor of the Melrose Symphony Orchestra, and the Quincy Symphony Orchestra and a cover conductor at the Boston Pops Orchestra. Maestro Udagawa is on the faculty of the Boston Conservatory where he teaches conducting. Frequently invited to guest conduct, Maestro Udagawa has worked with many different orchestras including the Boston Pops Esplanade Orchestra, Nobeoka Philharmonic Orchestra, the Pro Arte Chamber Orchestra of Boston, the University of Texas Symphony Orchestra, the Indian Hill Symphony, the Garden State Philharmonic, the Brown University Orchestra, the Syracuse Society for New Music, the Boston Conservatory Orchestra, the Midcoast Symphony Orchestra, the Newton Symphony, the Austin Civic Orchestra, and the Mid-Texas Symphony. Maestro Udagawa is at home in popular and contemporary music as well as the standard symphonic repertoire. He is known for his relaxed manner and ability to speak from the podium which has helped new audiences as well as enthusiasts gain a greater appreciation for symphonic music. His programs often include premieres of new works – some specially commissioned for the orchestra — as well as great orchestral works across the symphonic repertoire and lively Pops programs. He is also an integral part of the Cape Ann Symphony Youth Initiative.

Yoichi Udagawa, the son of a nuclear physicist father and singer/artist mother, was born in Tokyo, Japan in 1964. His family immigrated to the United States soon thereafter. He began playing the violin at age four and made his conducting debut at age fifteen. After receiving a music degree from the University of Texas at Austin, he continued advanced studies in conducting with Gunther Schuller, Seiji Ozawa, Morihiro Okabe, and Henry Charles Smith. A fan of many different styles of music, Mr. Udagawa also enjoys performing gospel music in addition to his conducting activities. He is also an accomplished violinist and an avid fan of exercise and yoga.

Cape Ann Symphony’s From the New World and Beyond is Saturday, May 18 at 7:30 pm at the Manchester-Essex High School Auditorium on 36 Lincoln Street in Manchester-by-the-Sea, MA and  Sunday, May 19  at 2 pm at the Dolan Performing Arts Center at Ipswich High School on 134 High Street, Ipswich, MA. Pre-Concert Lectures begin 30 minutes prior to the start of each concert.  Single ticket prices are $43 for adults, $38 for senior citizens, $15 for students of any age; $5 for youth 12 years old and under. For information, call 978-281-0543 or visit www.capeannsymphony.org

If all goes to plan she will squeeze out two more eggs in two day intervals.
Cinco de Mayo for bro 2 and May 7 for baby brother.

If you look at the tape at 4:51 PM is a reddish brown egg for a few seconds then the camera flakes out.

Here are the shops taking donations, thank you Pauline.

The following women owned businesses have boxes and are happy to take donations. Pauline’s Gifts, Gloucester, In Essex we have Essex Bird Shop, Sea Meadow Gifts and the Essex Exchange and the Olde Ipswich Gift Shop and Gallery in Ipswich MA.

These turkeys are so funny when they strut their stuff. 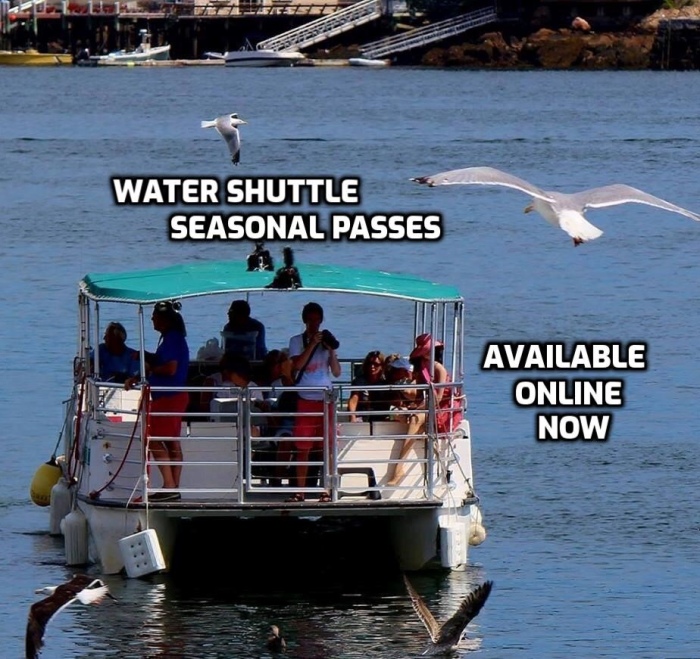 Items could be dropped off at Pauline’s Gifts, PM or wherever you see the specially marked boxes in town. 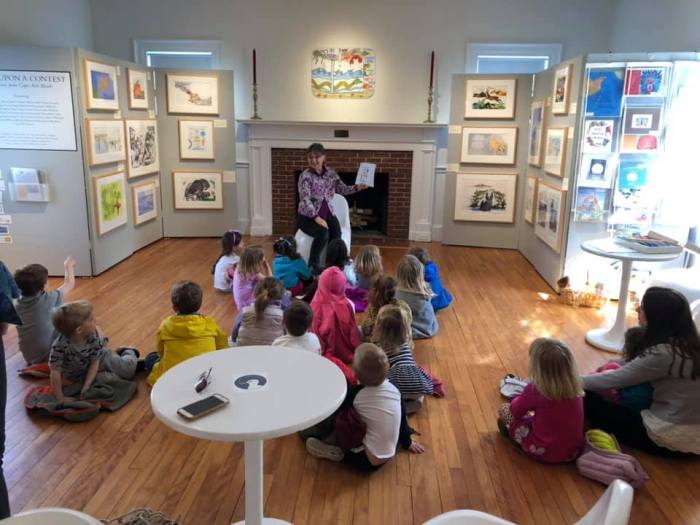 Librarian, Carol Bender, Head of Youth Services, Manchester Public Library, reading Where in the World is Catherine Abigail by Michael LaPenna and illustrated by Leslie Galacar. The children from Magic Years were visiting Once Upon a Contest at Manchester Historical Museum. 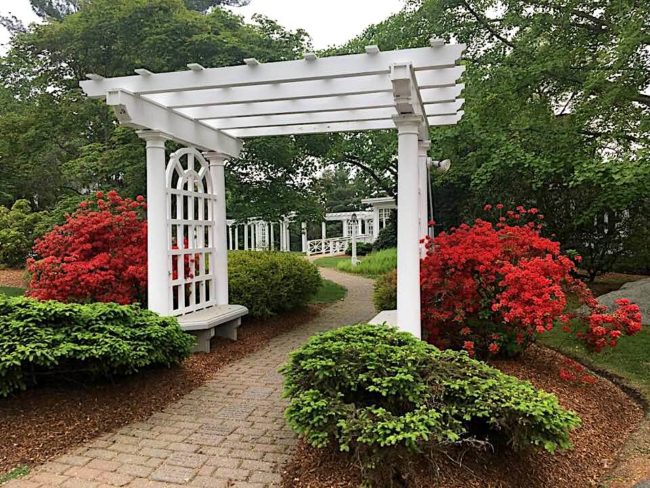 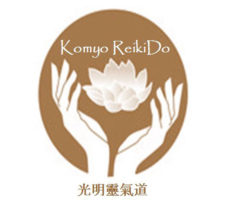 First Degree/ Shoden – Shoden means ‘first’ or ‘beginning’ teaching. The focus at Shoden Level is primarily on self-healing, self-care, health and happiness, as well as offering reiki to others (family, friends, pets, plants.) Students gain a basic knowledge of Reiki Ryohō and its history and learn the fundamentals of this hands-on healing practice.

Gloucester, Massachusetts. Atelier Cape Ann, a new bridal wear and alterations shop located at 57 Eastern Avenue, opened winter 2019. The changing window display beckons dreams and brightens this stretch along Rt. 127 with alluring bridal gowns and flower girl dresses showcased on the ground floor of this charming New England building. At the traffic lights, turn on to Eastern Avenue heading in the direction of Good Harbor Beach and Rockport. (If you’ve reached Jeff’s Variety you’ve gone too far.) There’s ample parking out back. Alterations by appointment only. http://www.ateliercapeann.com 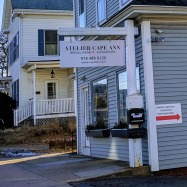 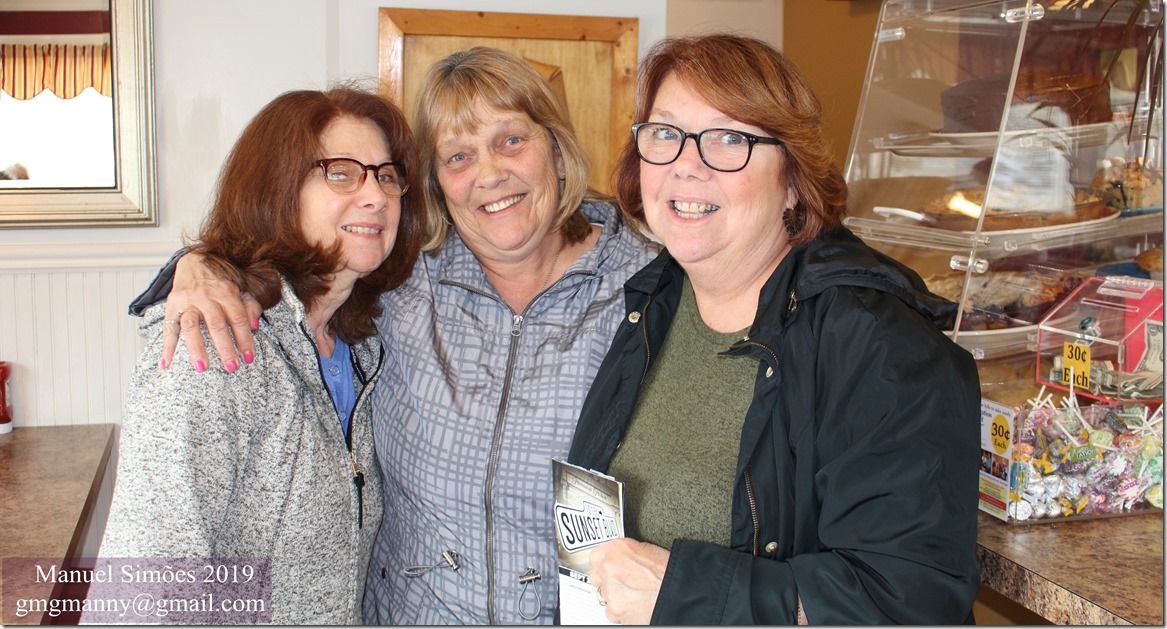 Thatch and I stopped by Plum Cove Beach for some quiet time after a long day of school, work, homework, baseball, lacrosse, etc.   It was nice to sit still for a minute and enjoy the view. 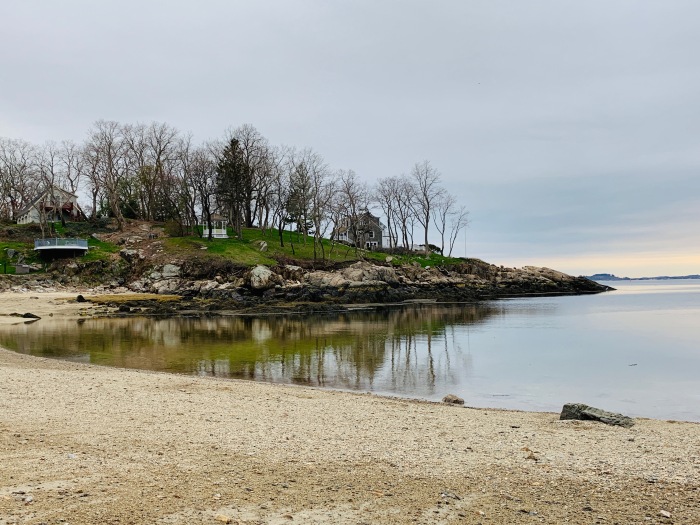 Thanks to Catherine Ryan’s recent post, my attention was drawn to the Elizabeth Gordon Smith Garden project at Stage Fort Park. I am quite enamored of the Triton statute. Sculptor Walter Hancock portrays him as majestic and mighty. Thanks once again to the Generous Gardeners for their work on this hidden gem of a memorial. I look forward to the flowering trees and additional flowers. It’s worth stopping by for a little rest and meditation. 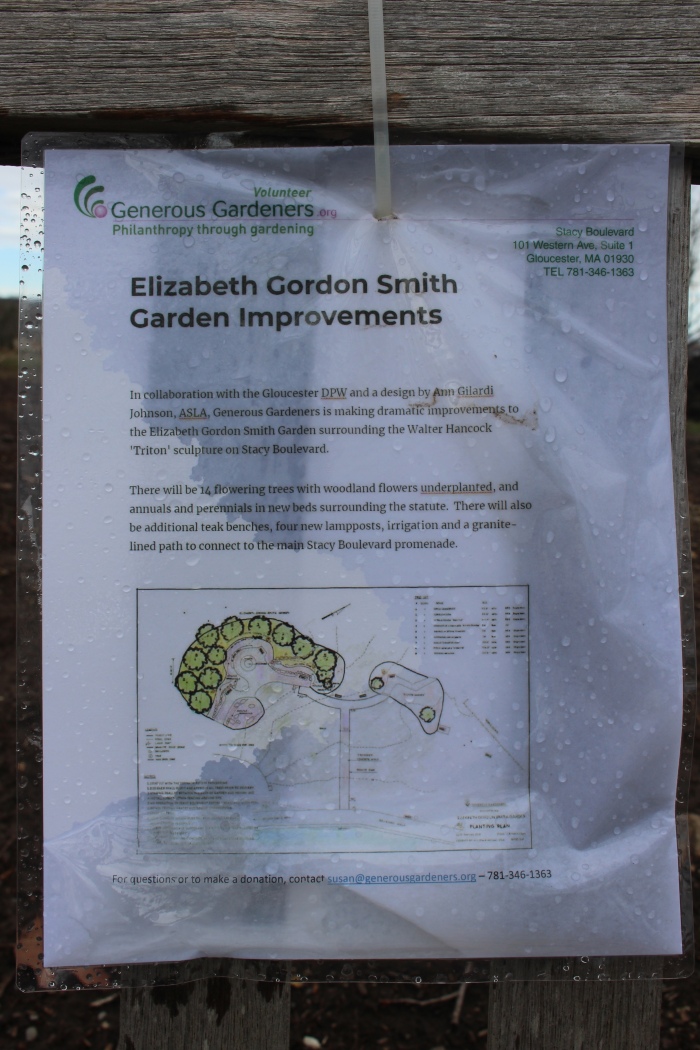 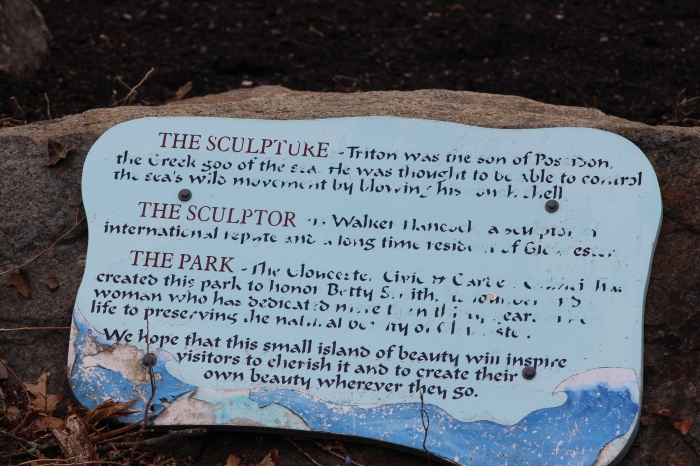 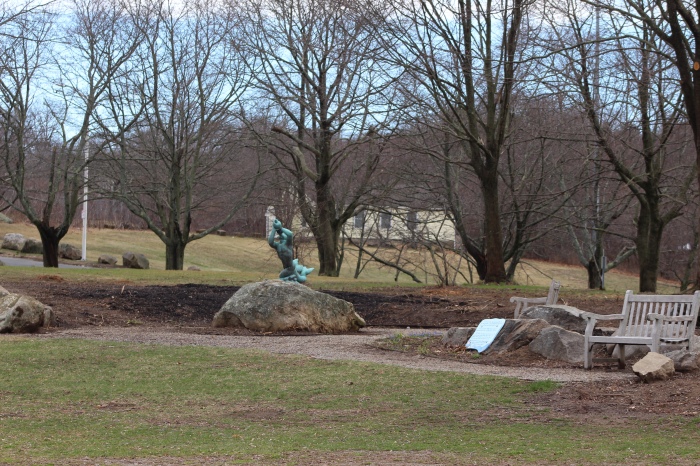 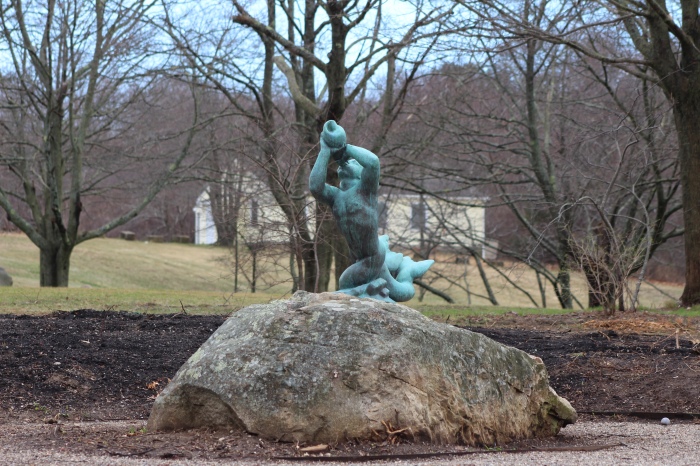 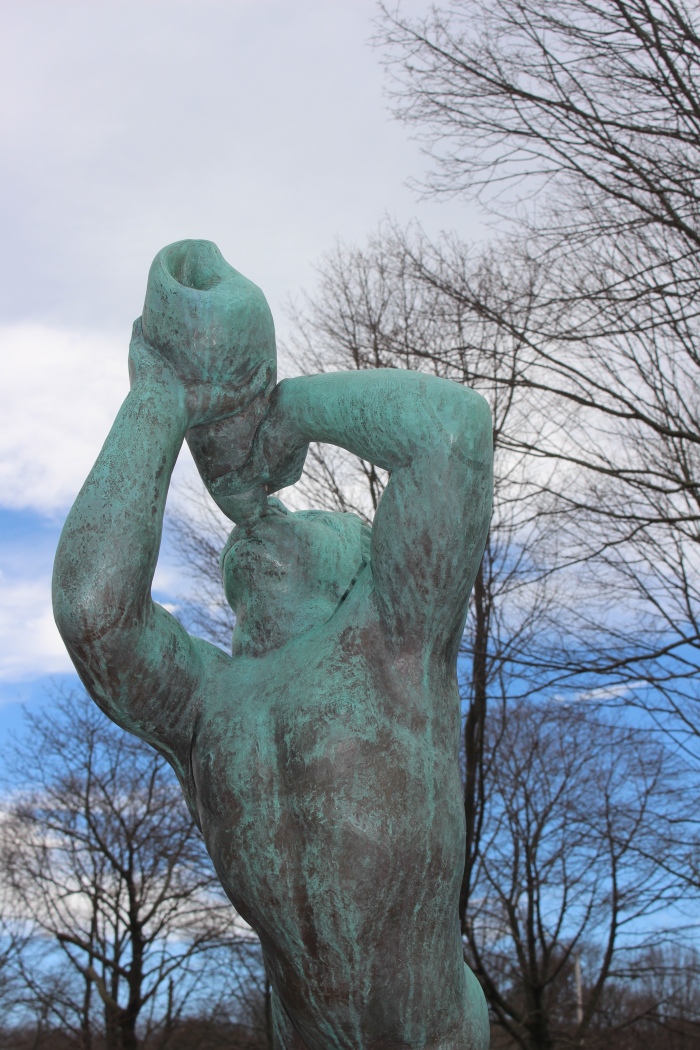