This short film is dedicated a dear friend who recently lost a beloved family member. Along with the tender melody by Jules Massenet, especially the last bits of footage (before the credits) made me think of angels and of hope.

Songbirds that they are, Tree Swallows make a cheery chirping chatter. They have long narrow forked tails, all the better for gliding and for their signature aerial acrobatics. The male’s upper parts are a brilliant iridescent blue-green, the female’s somewhat duller, and both female and male have white underparts. The migrating juveniles are almost entirely brown with either white or pale grayish underparts. 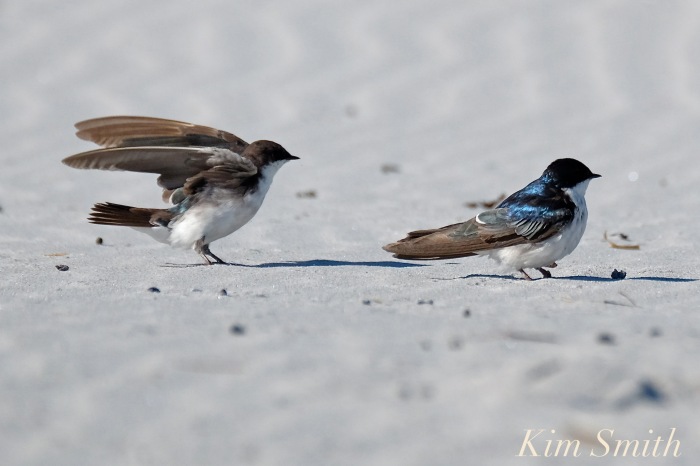 Tree Swallows breed in the wetlands and fields of Cape Ann. Their name comes from the species habit of nesting in tree cavities. Tree Swallows have benefited tremendously from efforts to help save the Eastern Bluebird because they also nest in the nest boxes built specifically for the Bluebirds.

Acrobatic aerialists, they twist and turn mid-flight to capture a wide variety of insects including butterflies, dragonflies, greenheads, bees, beetles, and wasps. 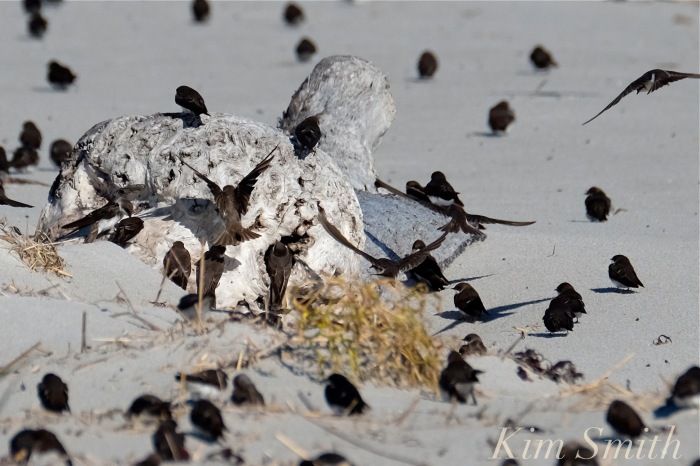 Tree Swallows eating insects on the beach and from the crevasses in the driftwood.

Utilizing both fresh and saltwater to bathe, Tree Swallows have a unique habit of quickly dipping and then shaking off the excess water while flying straight upwards.

Tree Swallows begin migrating southward in July and August. The flocks that we see gathering on Cape Ann migrate along the Atlantic Flyway. They overwinter in the southern states of the U.S., Mexico, the Caribbean, and Central America. Unlike migrating species of butterflies, several generations of Tree Swallows migrate together, the older birds showing the younger birds the way.