While filming at Henry’s Pond in Rockport I at first thought I was seeing a pair of pint-sized, or immature female Mallards amongst a mixed flock of full grown Mallards and American Black Ducks. But no, upon closer examination, their behavior was different from that of the much larger Mallards. They stayed together, the two females, foraging for food along the pond’s edge. When one flashed her brilliant emerald green wing, I realized it was no Mallard but the beautiful Green-winged Teal. 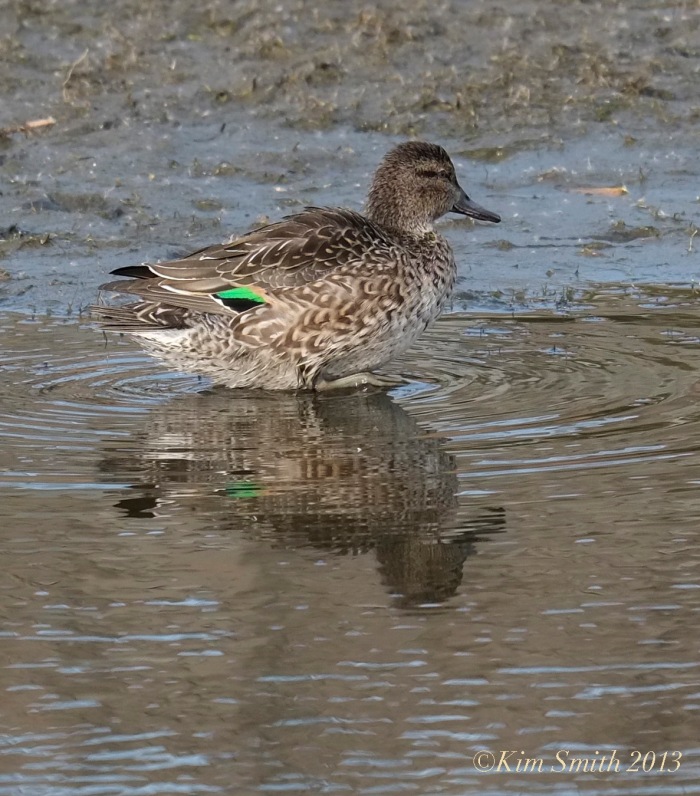 Like the chubby little Bufflehead, the Green-winged Teal is similar in size, about 13-15 inches in length.

I find it interesting that, based on their style of foraging, ecologists assemble waterfowl into several groups.“Dabbler” ducks skim food from the surface, or feed in shallow water by tipping forward to submerge their heads (which is exactly what I had observed while filming the petite Green-winged Teal). “Diving” ducks propel themselves underwater with large feet. A few dabblers may dive, but for the most part, dabblers skim.

In the above photo of a male and female Mallard in the foreground, and Green-winged teal in the background, you can see how close in color are the feathers of the females of the two species. The wing pattern is subtly different and you can also see the difference in size between the two species.

I have been organizing research and lots of photos for our Birds of Cape Ann series. Upcoming stories will feature songbirds, including Mourning Doves, American Robins, and Northern Cardinals, shorebirds of every size and shape including dabblers, divers, and seaducks, and I’ve planned a post just on bird food to grow in your gardens to attract our fine-feathered friends. As I often remind my readers, “When you plant, they will come!”

12 thoughts on “Birds of Cape Ann: Divers or Dabblers and the Green-winged Teal”