As many of our readers know, this summer while finishing up with editing my Monarch film, I have also been continuing to document our Good Harbor Beach Piping Plovers. To make the best and most informed documentary, I have also been filming at other north of Boston beach locations. During our last heat wave, we posted about about how PiPl parents protect their eggs during extreme temperatures. The chicks that you see hatching in the photos are the same eggs that survived the heat wave! and are from a very, very special Piping Plover pair. More about these two parents in an upcoming post; for now I just have time to write about the chicks hatching.

Witnessing a beautiful family of Piping Plover chicks hatch is a day I won’t soon forget. Not only struck by the sheer beauty of it all, I was highly aware of the formidable challenges these valiant little birds face at every stage of development. Even hatching was messy and challenging.

On my way into work, I had been checking daily on the nest and knew the hatching day was soon approaching. Arriving at dawn on the twenty-fifth day from when the pair had begun brooding all three eggs, it was apparent and wonderfully exciting to see something was going on in the nest. Mom was on the nest and she was unusually active, moving around and adjusting the eggs repeatedly. She popped up for a split second and I could see an egg cracking. A miracle truly, that the eggs were viable, as it was so late in the season and the heat had been so extreme.

During hatching, the Mom (or Dad, whoever happens to be brooding the eggs at the time hatching begins) makes a canopy over the nest with their fluffed-out feathers. The nest is a mere depression in the sand, below eye level, so the only time you can see what is happening is when the parent leaves the nest. This only happens for the briefest of moments. A chick begins emerging and while it is still half in its eggshell, the nesting parent takes any parts of the broken eggshell in his/her mouth and runs, then flies further with it, dropping the eggshell far away from the nest. During those few brief seconds when the parent leaves to discard the eggshell, you can see what is taking place in the nest. 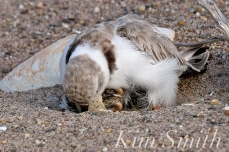 In the last three photos, the chick’s feathers are almost completely dry and fluffy.

Enthralled, I watched as two chicks hatched over an hour period, but then had to leave to be on site for a job installation that couldn’t wait. I hated to leave wondering, not knowing how the third chick would fare, and just prayed that it would still be light out when I stopped back on my way home from work that night. 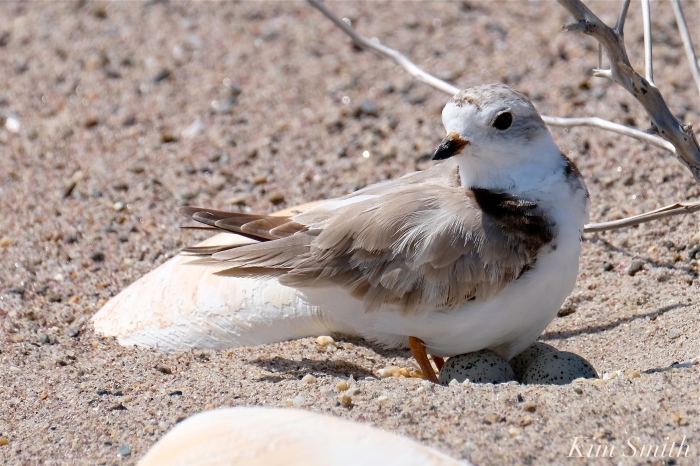