Very late in the afternoon, just as the sun was setting, the juvenile Harp Seal attempted to head back to sea. He began to scooch and wriggle toward the creek, pausing often to scratch and roll around in the sand. At one point he reversed direction and started back toward the dunes. 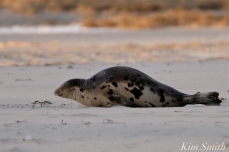 Just like Harbor Seals, Harp Seals have a tail, too.

After a few more false starts he made his way to the water. Before sliding in, he paused at the water’s edge to drink.

Nearly dead low tide, the water was not deep enough to swim. It was painful to watch him splash and undulate along on his belly in the shallows. He seemed to tire quickly and was very undecided about what to do next. We watched as the young seal made his way slowly around a sharp bend in the creek, then held our breaths as he made it all the way to the foot bridge. 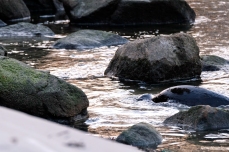 But then he suddenly stopped, turned around, and swam back down the creek, nearly the whole length of the creek from where he had come. The young seal seemed confused and it was heartbreaking to see. When I left at sundown he was on the flats in the creek.

Good Harbor Beach resident and Piping Plover monitor Sue W. reports that he is still there at 7:15. We’re hoping he makes it out at low tide, which is at 10:11 tonight.

The young Harp Seal appeared very tired when I left the beach at around 5:30.

Many, many thanks to Jane Goodwin, neighbor and Good Morning Gloucester reader, for alerting us to the Harp Seal.

Update to the Update

I checked on the little guy at 5:30 this morning on my way out of town to photograph and didn’t see any sign of him, but it was pitch black. I checked again on my way home, around 11am, still no sign, and there did not appear to be any signs of a skirmish with a coyote. The tide was high and the water was up to the top of the creek bed. It would have been much easier for him to slip into the water last night and head back out to sea.

In response to Facebook comments that the location of the seal should not have been posted publicly: The initial post was shared in the evening, after dark, and would not have been posted if people had not been behaving thoughtfully and kindly toward the seal. I believe it is important for adults and children to share the shore with wildlife, to love and respect a wild creature’s boundaries, not hide the whereabouts of the animal. There are exceptions in the case of at risk endangered and threatened species. ❤

9 thoughts on “UPDATE ON THE YOUNG HARP SEAL”