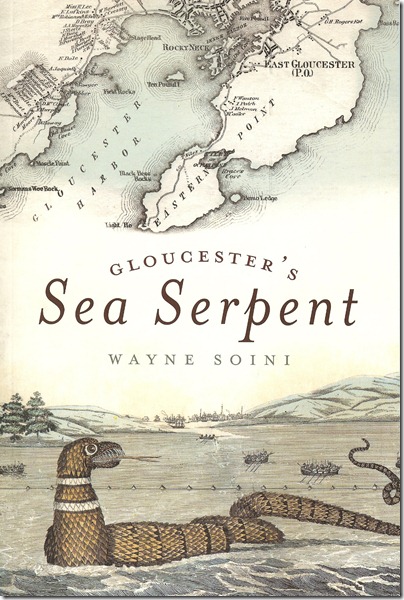 The Cape Ann Museum is pleased to present a book signing and reading with Wayne Soini, author of Gloucester’s Sea Serpent (History Press, 2010). Mr. Soini will be at the Museum on Saturday, December 18 at 3:00 p.m. This program is free and open to the public. Books will be available to purchase through the Museum Shop. Surprise a loved one this holiday season with an autographed copy of this new publication!

In 1817, as Gloucester, Massachusetts was recovering from the War of 1812, something beneath the water was about to cause a stir in this coastal community. It was a misty August day when two women first sighted Gloucester’s sea serpent, touching off a riptide of excitement among residents that reached a climax when Matt Gaffney fired a direct shot at the creature. Local historian Wayne Soini explores the depths of Gloucester harbor to reveal a treasure-trove of details behind this legendary mystery. Follow as he tracks Justice of the Peace Lonson Nash’s careful investigation—the world’s first scientific study of this marine animal—and judges the credibility of numerous reported sightings.

Wayne Soini was born in Gloucester in 1948, regrettably too late to see the sea serpent swim into or out of the harbor. He graduated from Gloucester High School in 1966. His most recent degree, a master’s degree in history from the University of Massachusetts-Boston, was awarded in 2009. Soini coauthored the biographical sketch and local sports history book, Judge Fuchs and the Boston Braves, with the late Robert Fuchs in 1998. Soini is a member of the National Writers Union, Local 1981, Boston Chapter, and of the Boston Athenaeum. He makes his living as a lawyer and lives with his partner, Anne, in Brookline, where he basically reads and watches his weight. Mr. Soini is donating the proceeds of his book to benefit the Cape Ann Museum and the Gloucester High School Scholarships Fund.

The Cape Ann Museum is located at 27 Pleasant Street in Gloucester. Hours are Tuesday through Saturday from 10:00 a.m. to 5:00 p.m., and Sundays from 1:00 p.m. to 4:00 p.m. The Museum is closed during the month of February, on Mondays, and on major holidays. Admission is $8.00 adults, $6.00 Cape Ann residents, seniors and students. Children under 12 and Museum members are free. The Museum is wheelchair accessible. For more information please call: (978) 283-0455. Additional information can be found online at www.capeannmuseum.org.