Beaver Pond, also known as Langsford Pond, is located on the outskirts of Cape Ann’s Dogtown. Exquisitely beautiful and peaceful, the pond is teeming with life, habitat largely created by the relatively new presence of the North American Beaver (Castor canadensis).

Beavers were absent from the Massachusetts landscape from 1750 to the early 1900s due to deforestation from agriculture and unregulated hunting and fur trapping. In the early 1900s forests began to recover as farmers abandoned their fields to work in cities. By 1928, a Beaver was found in Stockbridge. The public’s enthusiasm for the return of the beavers abounded and in 1932 three additional beavers from New York were introduced and released in Lennox. Today, Beavers have rebounded to the extent that some controlled hunting is permitted.

Beavers are ecosystem engineers and the ponds they create become wildlife magnets. Think about just this one example of the ecology of a beaver pond: woodpeckers make holes in the dead trees engineered by Beaver activity, Wood Ducks nest in the holes created by the woodpeckers, and raptors hunt the smaller birds.

More examples of how Beavers benefit other species of wildlife include favored nesting sites of both the Great Blue Herons and Osprey are the dead treetops of older trees in beaver swamps. Local species of turtles, the Snapping Turtle and the Eastern Painted Turtle, benefit from abundant vegetation created by beaver tree felling, which causes the forest to regenerate. Snapping and Eastern Painted Turtles prefer standing and slow moving water and hibernate under logs and lodges of Beavers. Painted Turtles also use floating logs to bask upon.

Like Niles Pond and Henry’s Pond, Langsford Pond is another superb example of a body of fresh water close to a saltwater cove where the combination of the two ecosystems provides shelter, nesting sites, and an abundance of food. While at Langsford Pond, I often see Great Blue Herons, swooping overhead, coming and going, between feeding grounds at the head of Lobster Cove and the shelter found in the vegetation surrounding the pond. Today, December 8th, a juvenile was seen on the far side of the pond, as were numerous Wood Ducks.

Since 1999, Langsford Pond has been protected by the Essex County Greenbelt Association. When I was filming there in October and November it was wonderfully overgrown and somewhat difficult to access. Recently, vegetation has been cut back, which makes walking to the pond’s edge much easier. Disease bearing ticks are present.

Similar scenes as several in the film, only a month later without the vibrant fall foliage –“stick” season

Last winter Liv and Matt showed me a place on the outskirts of Dogtown where they go rock climbing. I filed it away under places to visit during warmer weather. With all things Piping Plovers and filming shorebirds I didn’t have a chance to revisit until this fall. The pond is somewhat difficult to explore, with no trails, lots of viney runners to trip you up, rocky uneven surfaces for falling flat on your face, and loaded with ticks but nonetheless, is exquisitely beautiful. Until its name is learned and for the time being, I’m calling it Beaver Pond because so far, I’ve counted FIVE beavers there!

The beavers appear to have one large lodge with multiple mini-dens strategically built around the perimeter of the pond.

Evidence of an active beaver pond with gnawed log

The Beaver Family is nocturnal and conducting most of its business on the far side of the pond. I have only been able to shoot a photo outside my camera’s range of quality photo. 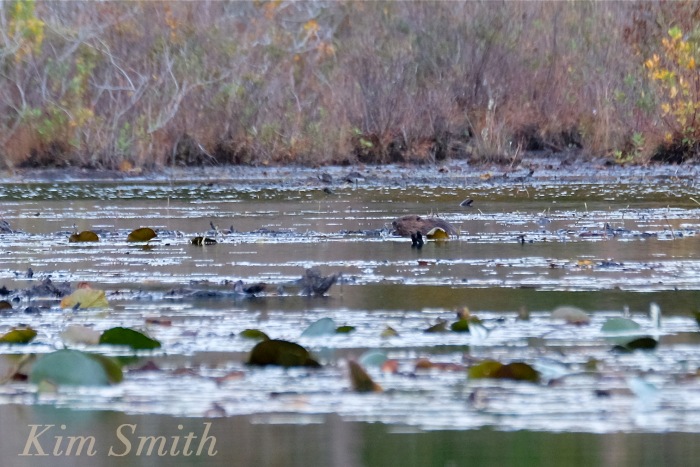 There’s the beaver, on the far side of the pond, blending with the lily pads and fallen leaves

I did manage to take some fun footage, which I will be hopefully uploading in the next few days. One early evening, I sat as still as a stone, for at least half an hour, when one swam nearly right up to my feet!! I am usually filming and photographing simultaneously, but was afraid to make a move to switch to my still camera for fear that the slightest bit of motion would send the creature diving. Also on the furthest side of the pond were a family of the unbelievably beautiful Wood Ducks. That photo is also too far outside my camera’s quality photo range, but at least you can get an idea of their striking feather patterning. More information from Beaver Central to come!

Male and female Wood Ducks – notice the female’s large white eye patch and the way she blends perfectly with her surroundings.

It was moving so fast through the reeds and then dove under, so I couldn’t get a great shot of it.  It could have been a beaver, or it could be the Niles Pond variety of the Loch Ness monster.

I was walking the Goose Cove loop this past weekend and saw about 20 trees down, most 8-10″ in diameter.  The beavers are going to change the shape of the reservoir again!
Sarah Buck

Getting ready for the big public opening tonight 6-8pm. Blogging on event with fireworks, etc. tomorrow.

Hi Joey
Was in South Boston the other day and shot these pictures of the Tea
Party Museum and the Tea Party ship Beaver .
Anthony

Yesterday I had the privilege to ride on the Tea Party Ship Beaver in the parade to its new berth at the Tea Party Ship Museum in Fort Point Channel, Boston. Once in place the masts will be stepped and the rigging will be completed.

It was a perfect day, hundreds of people welcomed us.

What a great accomplishment for master shipwright Leon Poindexter (shown close up) and his crew at the Gloucester Marine Railways. Mr. Poindexter is known for his artistry and has worked on many vessels on the National Register of Historic Places as well as serving as the master shipwright for 20th Century Fox to retrofit the tall ship Rose for the Academy Award Winning motion picture Master and Commander starring Russell Crowe.

In honor of the anniversary of the start of the American Revolution on April 19th, the new Boston Tea Party Ships Museum welcomes the arrival of the historically accurate vessel the Brig Beaver.

She will be returning to the waters where the Boston Tea Party, "the single most important event leading up to the American Revolution" occurred on the night of December 16, 1773.

The Beaver made the voyage from Gloucester where it received complete renovations at the Gloucester Marine Railways. 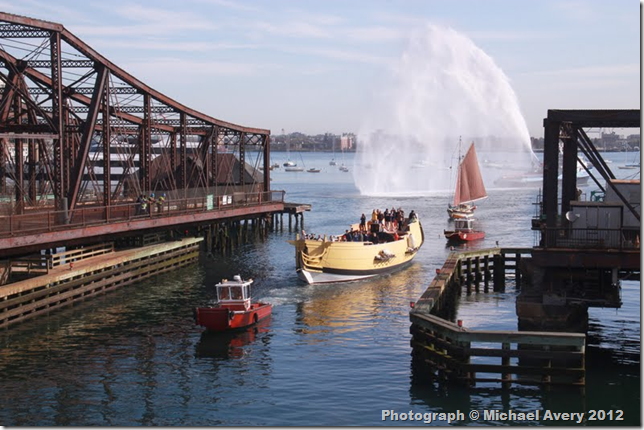 Laying the planking over the deck beams of the Beaver.

Bringing it to you first, natch!

This is 18 minutes of video compressed into 1 minute 40 seconds.

The ship will be part of a Tea Party museum including the replica ships from the Tea Party and is scheduled to open in June in the Fort Point Channel in Boston.  The spot of the museum  is close to the original site of the December 1773 tea party, where colonists dumped tea in the harbor to protest British taxes.

The new Boston Tea Party Museum replica ship was launched this morning from East Gloucester Marine Railways.  Video of the launch in a timelapse is being uploaded as we speak.

GMG on the spot.

The ship will be part of a Tea Party museum including the replica ships from the Tea Party and is scheduled to open in June in the Fort Point Channel in Boston.  The spot of the museum  is close to the original site of the December 1773 tea party, where colonists dumped tea in the harbor to protest British taxes. 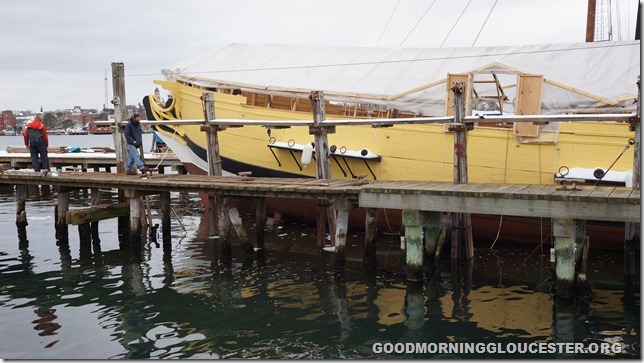 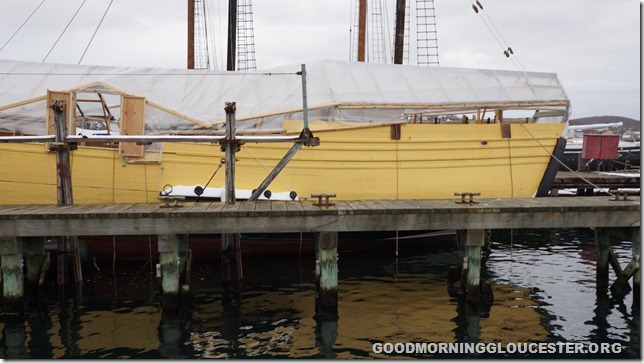 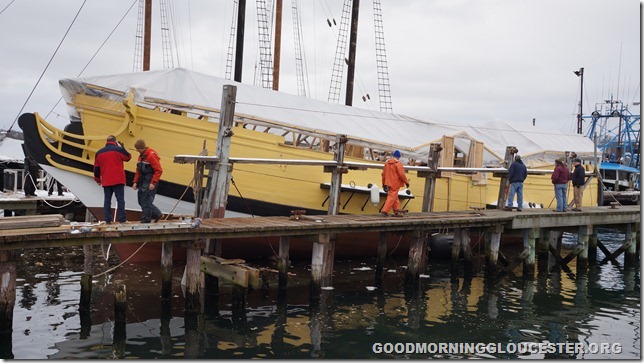 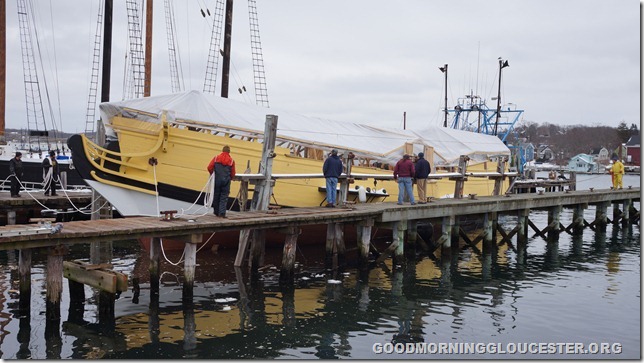 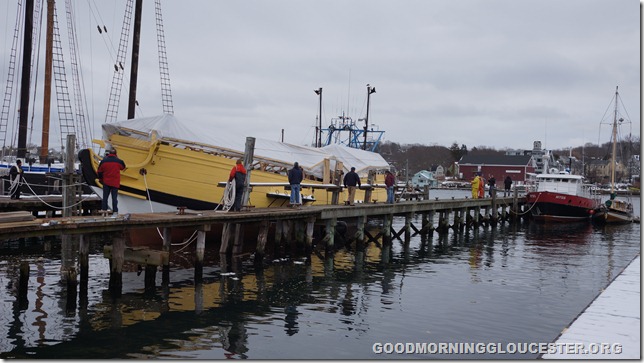