This morning we found Papa and Mama in precisely the same nesting areas as last Friday. ACOfficers Teagan and Jamie pointed them out. It was too wet and drizzly for my camera, so we don’t have photographic evidence, but we could clearly see they were courting, Papa fan bowing his tail feathers and Mama inspecting the nest. 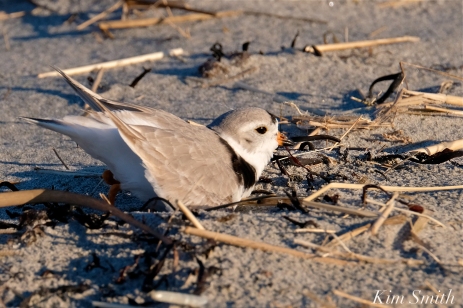 We don’t know where they disappeared to while the weekend disturbances to the nesting area were taking place, but I do know this is a gift and a second chance for our community to get it right.

It will take our entire community working together to help mitigate some of the threats the PiPls daily face.

Gloucester’s DPW has installed dune fencing, which is helping to restore the dunes. Protecting the dunes benefits both people (our beloved beach) and wildlife.

Improved trash collection and heavier fines for littering helps keep predators such as gulls, crows, foxes, and coyotes from scavenging the beach for garbage left behind by people, and makes for a much more pleasant beach going experience.

Now it is up to the citizens of Gloucester to respect its ordinances and laws by not littering, not trampling through the dunes, and by not bringing dogs to the beach during shorebird nesting season.

And for the City to enforce these laws.

Today is Tuesday. In order to be prepared for the very real possibility of another warm weekend day in April (five days from now) we need an IMMEDIATE CALL TO ACTION

The following two photos (photos are not posted here, please see kimsmithdesigns.com) are posted to show as an example as to why we need help from uniformed officers in enforcing the ordinance. This family was politely told that the ordinance had changed and that the ACOfficers were issuing tickets. The father’s response was “we’ll keep the dog in our pocket.” Moments later, the mother and daughter were taking their dog on a romp, off leash, at the creek.

Folks don’t understand that if we had chicks on the beach, this would pose an incredible threat. Even the smallest dog is no match for a tiny shorebird chick crouched down in the sand, unable to fly away, and at risk of being stepped on. Our Piping Plover parents often bring the teency weency chicks down to the creek to feed on hot crowded summer days.

Please be reminded that it was constant unrelenting dog disturbance that drove the PiPls into the parking lot last April. Knowing what we know, and in learning from last year’s debacle, it  would be a crime if we let that happen again for a second year in a row.

The Piping Plover is the littlest of shorebirds struggling against extremes- loss of habitat, rising sea level, natural predators, and human-created predators and disturbances. We have been given a gift, to be able to witness part of the life story of the Piping Plover here on our Good Harbor Beach.

Two of the three birds went missing during the day on Saturday. There are no coyotes or foxes roaming Good Harbor during the busiest part of the day while the beach is teeming with thousands of people and hundreds of dogs.

Piping Plovers feed alongside gulls, and many other species of shorebirds. Gulls and Crows eat baby chicks and eggs, not adults. One of the most astonishing scenes you will see when observing the dynamics between the gulls and the PiPls is to watch this tiny shorebird chase a gull away from its nest and chicks, biting and nipping the gulls tail fathers and even latching on. Both parents get involved and they will chase the gull far down the beach.

2 thoughts on “HAPPY NEWS- OUR GOOD HARBOR BEACH PIPING PLOVERS HAVE RETURNED – A SECOND CHANCE FOR OUR COMMUNITY TO GET IT RIGHT!”