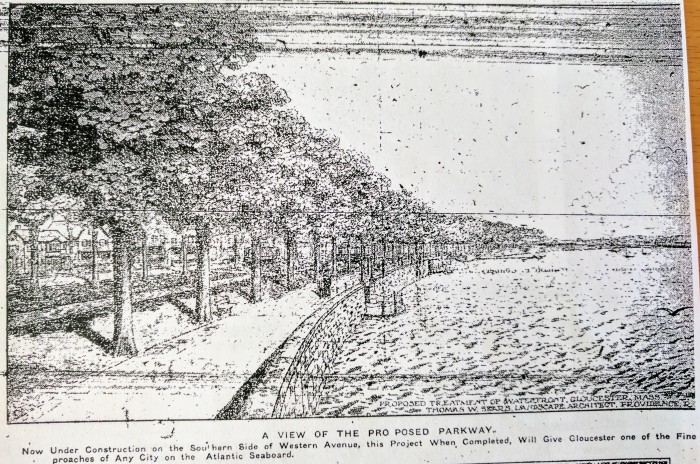 The Gloucester Daily Times published this image in 1923 with the photo caption: “Now Under Construction on the Southern Side of Western Avenue, this Project When Completed Will Give Gloucester one of the Finest Approaches of Any City on the Atlantic Seaboard.”  The meticulously hand drawn credit within the drawing itself caught my eye as much as the drawing: “Proposed Treatment of Waterfront, Gloucester, Mass. Thomas W. Sears Landscape Architect, Providence RI”. Thomas W. Sears was a remarkable 20th Century landscape designer. The modern Boulevard work completed in 2014-17 gracefully carries out and returns to the original dreams for the Western Avenue highway and park that are more than a century in the making. 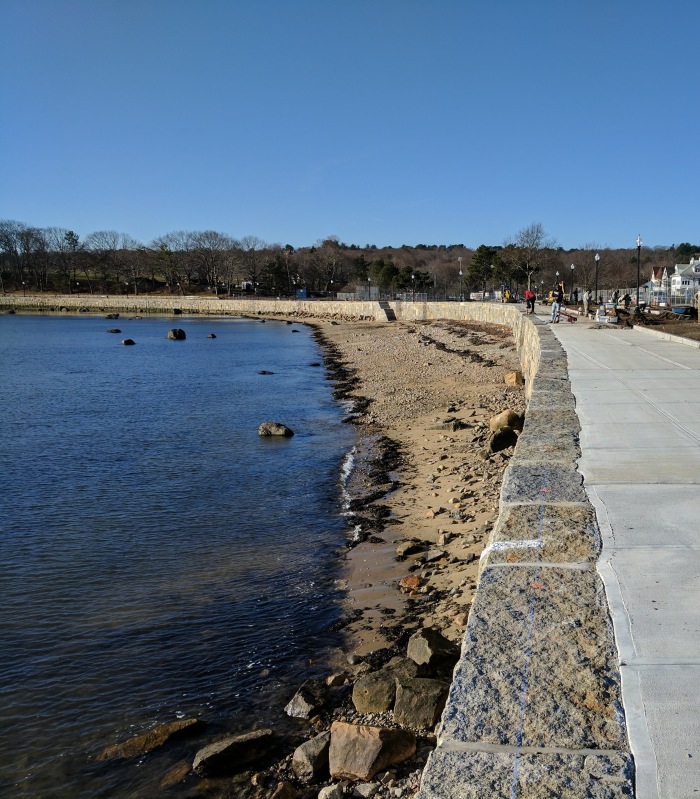 Thomas Warren Sears was born in 1880 in Brookline, Massachusetts, and grew up in this elegant abode at the corner of Beacon and Charles Street. This black and white house portrait was shot in 1897. 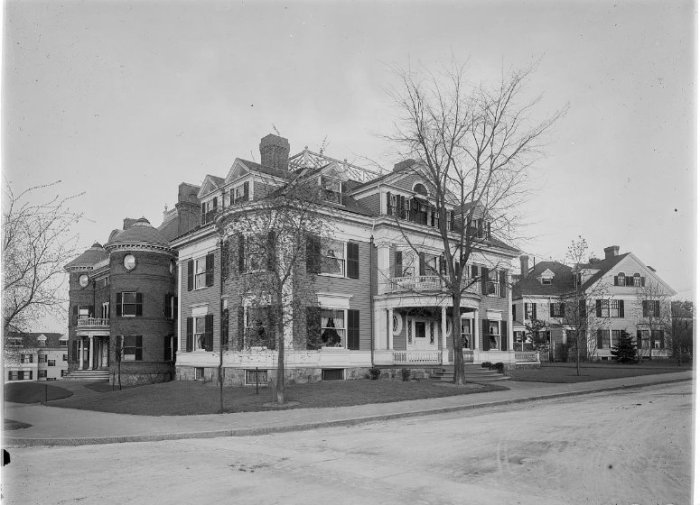 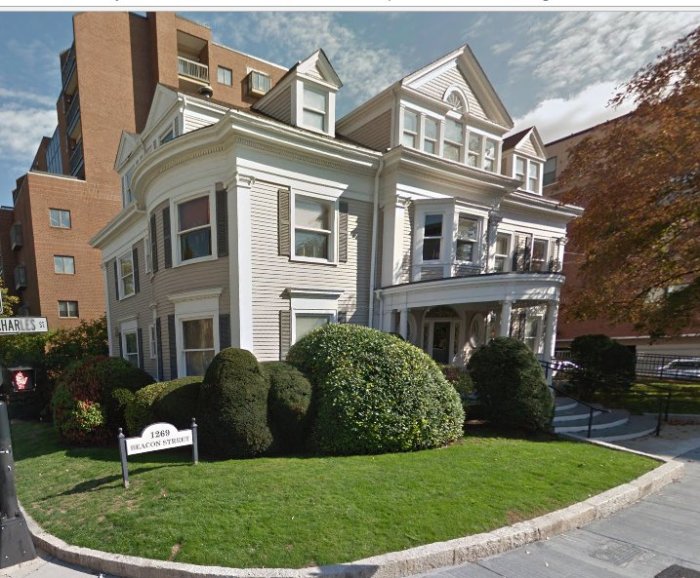 After being ousted from the New York City parks department, the ‘father of American landscape design’, Frederick Law Olmsted (1822-1903), launched his business a ten minute walk from the Sears family home.  The headquarters at 99 Warren Street was named “Fairsted” and was in operation until 1979 when it was declared a National Historic Site and transferred to the National Parks. 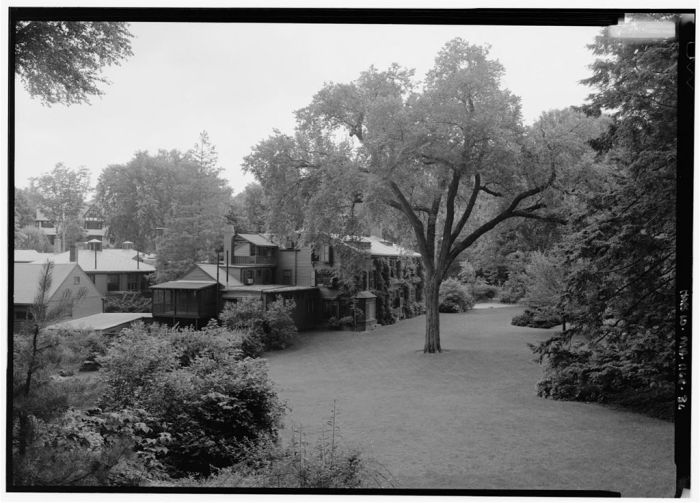 If there was no neighbor connection early on, a professional one came soon: Sears worked for the Olmsted Brothers immediately after receiving two degrees from Harvard– his BA in 1903 and his BS in 1906. (There may have been an earlier Brookline connection.) Rather quickly Sears left to set up his own firm: first in Providence, RI, when he did work for Gloucester’s Boulevard, and not long after in Philadelphia. In 1911 he gave a talk for the Proceedings of the Engineers’ Club of Philadelphia 28 (April 1911):147-158., “The Functions of the Landscape Architect in Connection with the Improvement of a City” available online as part of an urban planning anthology compiled by John W. Reps, Professor Emeritus, Cornell University.  I wonder if he shared his Gloucester photographs as part of his talk?

“There are two main approaches to cities: (1) On water by boat, and (2) on land by railroad. Along both of these lines of approach land should be taken for public use, and for very different reasons. Take first the use of water fronts: Unless some provision is made for the public, the whole water front, whether it be river or harbor, may be usurped by commercial enterprise and the public deprived of ever seeing the water except when aboard a boat. In certain cases, as in New York, where the water front must of necessity be utilised for dockage, a combination of commercial and public use may be successfully employed. There the docks are owned by the city and leased by the steamship companies; in this way their appearance can be controlled. At present it is planned to build on the tops of these docks huge recreation parks which may be used by the public.”- 1911 Thomas W. Sears

“An effort has been made in this paper to show clearly that landscape architecture is utilitarian quite as much as esthetic; that whatever one is designing, whether it be a city plan or any of the elements in a city, the design should be governed by use as much as beauty.” – 1911 Thomas W. Sears

By 1917 Sears was commissioned regularly and had a long, full career including notable designs for the Reynolda estate now part of Wake Forest University, Winston-Salem, North Carolina, and the wildly influential outdoor amphitheater for Swarthmore College, the Scott Outdoor Auditorium. His work in Gloucester is rarely mentioned.

Since the Gloucester drawing was marked ‘Providence’, I knew the drawing was done long before the 1923 construction. I tentatively dated the schematic ca.1910. Thankfully Thomas Warren Sears was a photographer, too. Turns out that this image is a Sears’ photograph of a lovely Sears’ design. The glass negative is dated 1908 which squares with his professional career timeline. 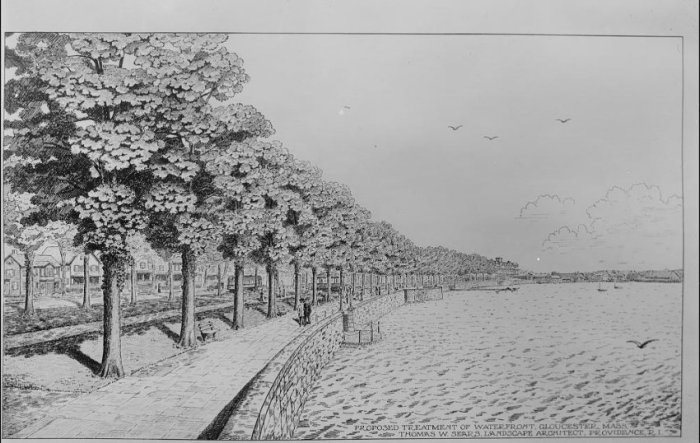 One of the modern design elements is the welcome ornamentation of lights. They feel like they were always here because line is such an essential part of design and they add the vertical visual interest. When I saw the new light bases I thought of the line of trees in the Sears drawing. I love the mix of natural and formal design in his rendering, but am equally gobsmacked by the sweeping open vista. Both are sensitive approaches and part of the context of the Boulevard’s build.

BEFORE THE BOULEVARD- Sears photos

Thomas Warren Sears photographed Western Avenue for his preparatory work. See the homes along the beach that were later removed for the construction of the Boulevard; distant vistas to the Surfside Hotel (built after Pavilion burned) and Stage Fort park; and Western Avenue street scenes looking east and west before the road was widened. 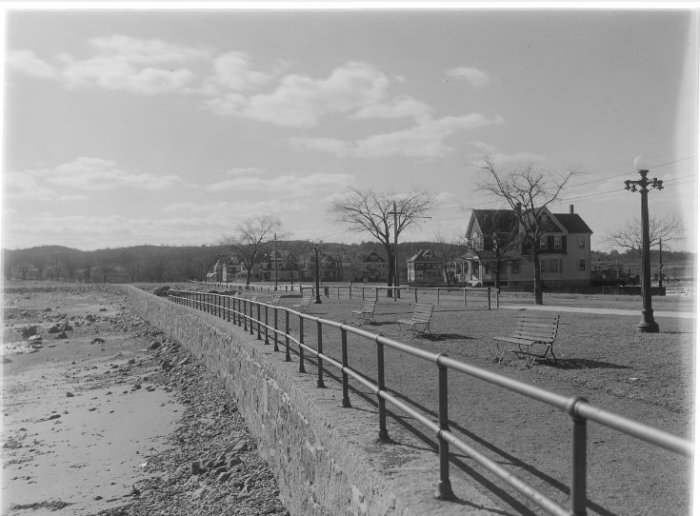 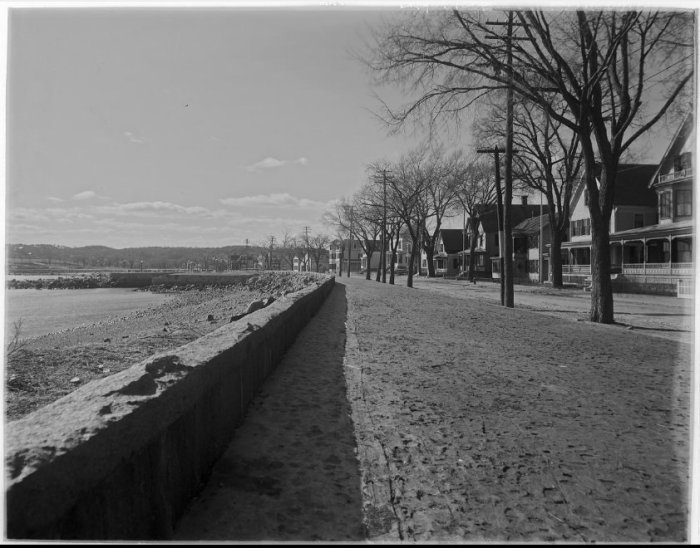 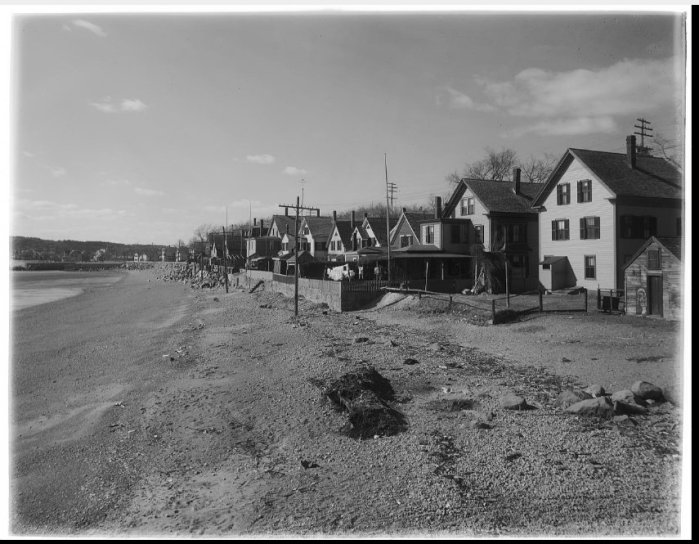 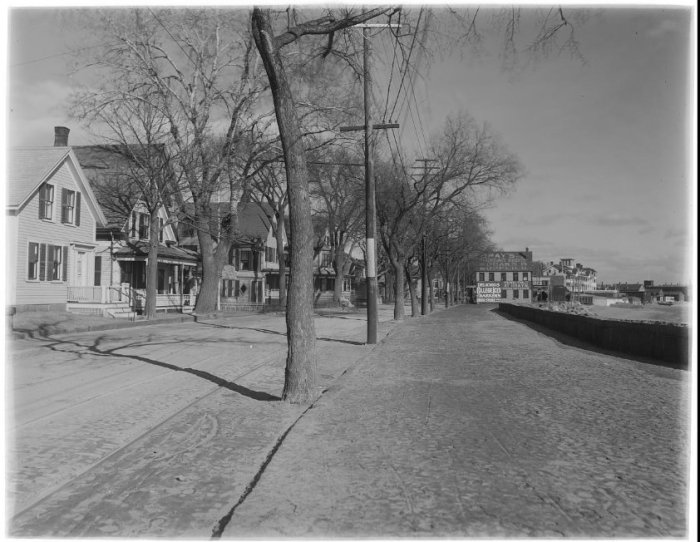 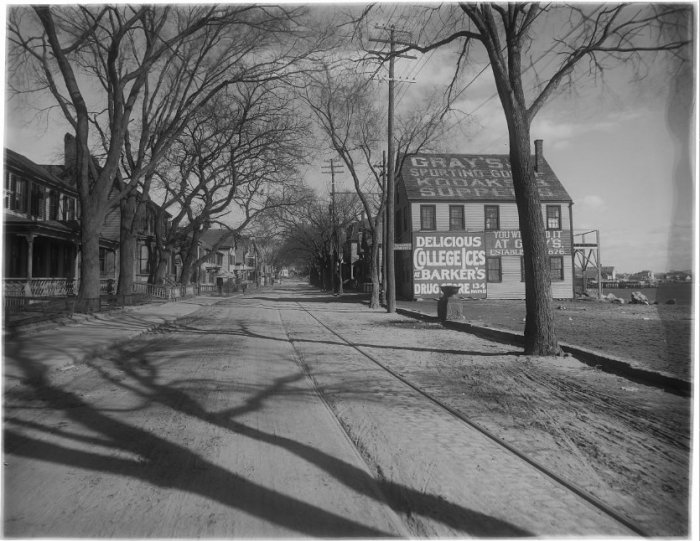 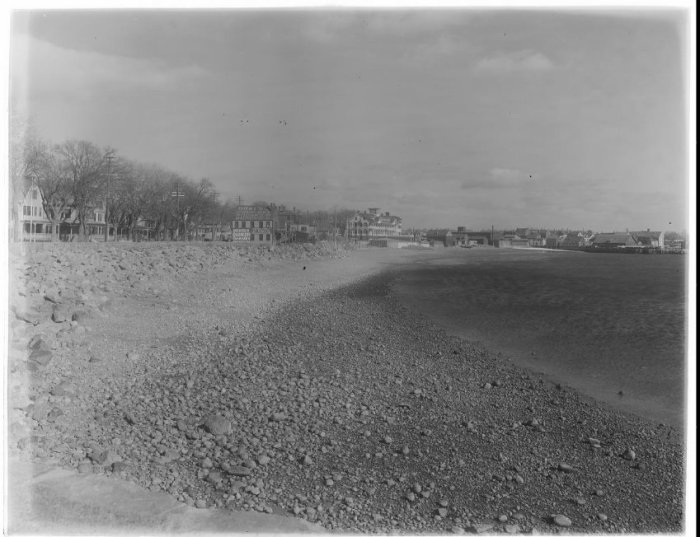 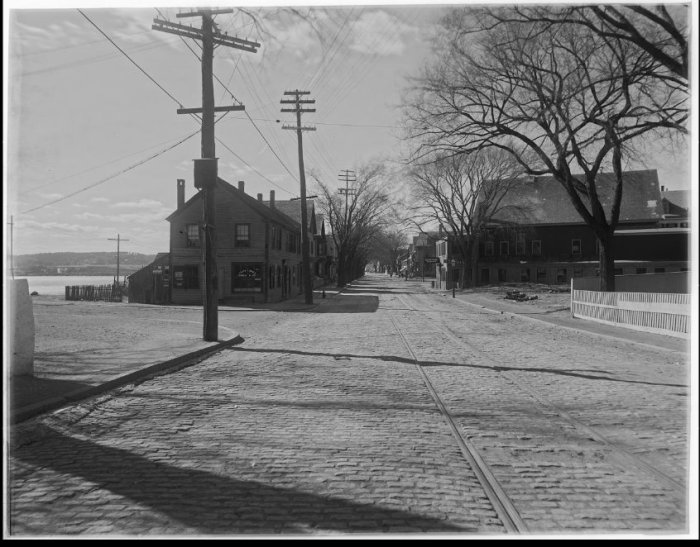 TABLET ROCK BEFORE THE FOUNDERS PLAQUE

The Thomas Warren Sears archives are held at the Smithsonian and they include more than 4,600 black and white glass negatives and glass lantern slides from pre-1900 to 1966. He took the photo of the family house in Brookline I shared above. The collection includes documentation of Olmsted projects. I’ve identified several Gloucester scenes that were unknown or mistitled, like this Stage Fort photograph dated 1901 when Sears was still at Harvard. 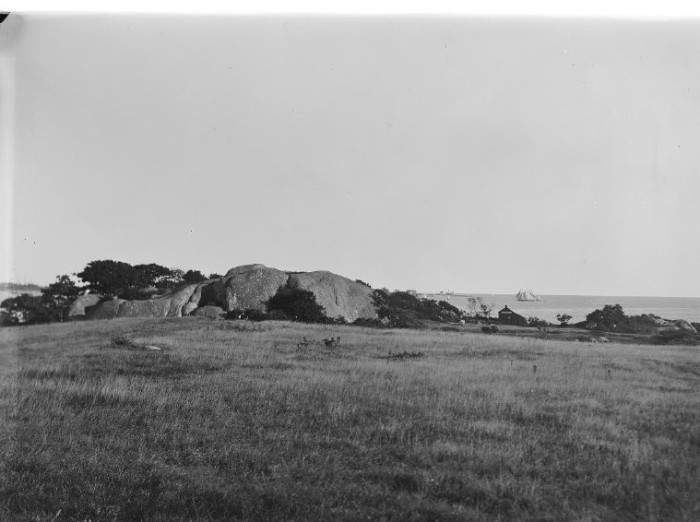 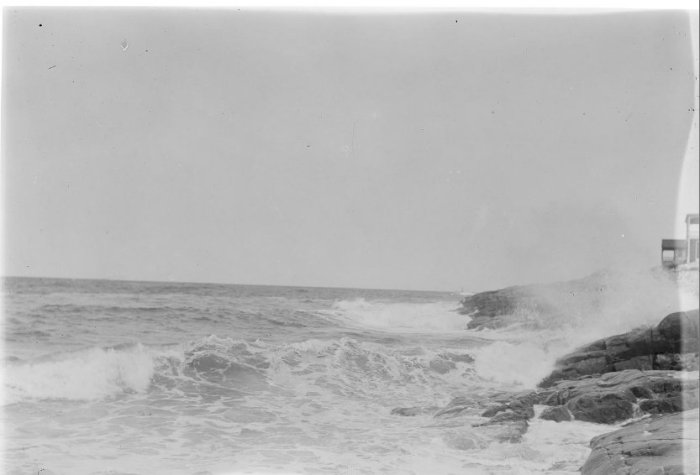 Sears was a wave man 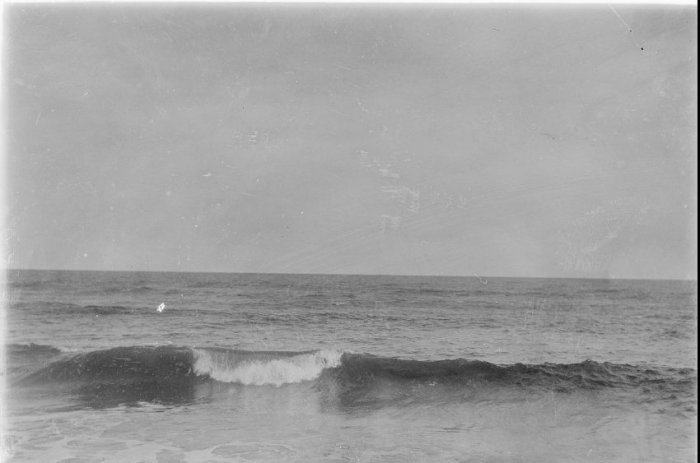 Sears’ other design work in Gloucester included plans for the Hawthorne Hotel in East Gloucester. 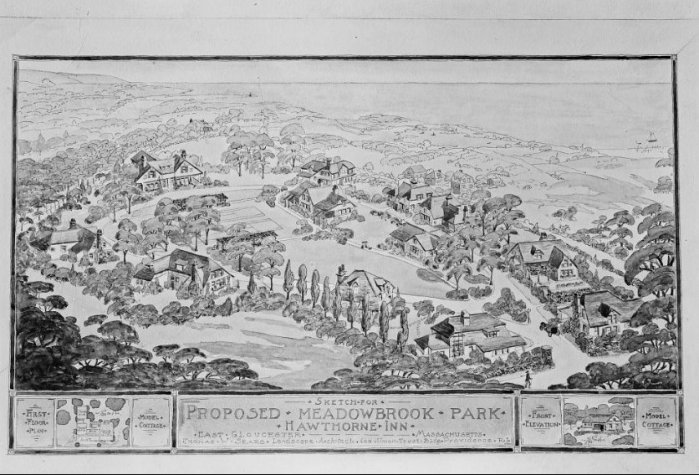 Next Boulevard post: More photos and super high resolution scans of the original 1922 and 1923 plans for the Boulevard

9 thoughts on “Stacy Boulevard Public Works stunner | Gloucester is an early client for the Harvard and Olmsted trained landscape designer Thomas Warren Sears. His 1908 photos are a must see! Part 2”