With their big brown winsome eyes, we tend to think seals are sweet and adorable. But just as there are abnormal behaviors in people, so too do other species of mammals possess aberrant traits.

Yesterday morning while heading down to take a walk on the beach I was wondering if anything interesting had washed ashore with the previous day’s king tide. At that very moment I looked over the shoreline and saw what appeared to be a small seal in the seaweed. I approached cautiously from behind because from a distance it appeared as though it was resting.

We’ve all seen seals washed ashore but I have never seen one with the skin peeled away, down to the very muscle, and with the layer of blubber so clearly defined. The seal was small and slender–from tip to tail about two and a half feet–if that.

The area all around the seal was undisturbed, which led me to believe it was not a coyote. The face and neck skin were so cleanly removed, it wasn’t a boat propellor, but it had to have happened in the water. What kind of creature would skin a seal? 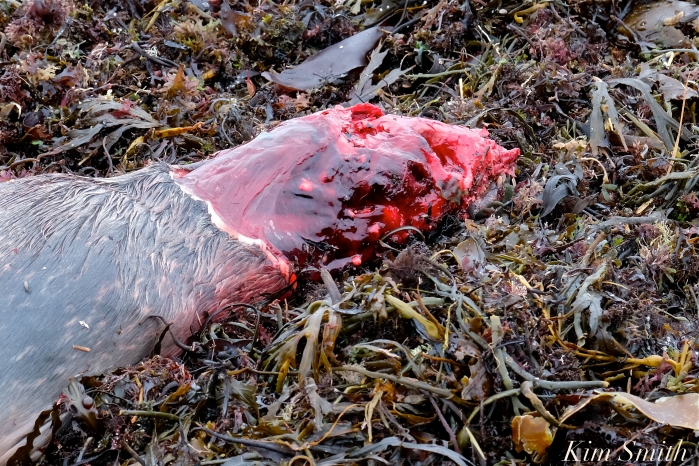 Not only do Grey Seals eat Harbor Seals and Harbor Porpoises, but bull Grey Seals have been documented eating young of their own kind. It may be more common than previously thought. After reading the description of how an adult Grey Seal drowned, and then ate a pup, I suspect there is the possibility that this young seal was killed by a Grey Seal.

Have any of our readers ever seen a skinned seal and if yes, please tell us what you may, or may not, know. Thank you.

The following is footage of a male Grey Seal eating a Grey Seal pup, with brackets placed around the link so that you can chose to not to see this disturbing video if you do not care to. [https://youtu.be/SmklASZUrZ8]

Corkscrew Seals: Grey Seal (Halichoerus grypus) Infanticide and Cannibalism May Indicate the Cause of Spiral Lacerations in Seals

Large numbers of dead seals with characteristic spiral lesions have been washing ashore around the North Atlantic over the past two decades. Interactions with ship propellers and shark predation have been suggested as the likely causal mechanisms. However, new evidence points towards a more likely candidate: grey seal predation. An adult male grey seal was observed and recorded catching, killing and eating five weaned grey seal pups over a period of one week on the Isle of May, Scotland. A further 9 carcasses found in the same area exhibited similar injuries. Post mortem analysis of lesions indicated the wound characteristics were similar to each other and in 12 of the 14 carcasses analysed, were indistinguishable from carcasses previously attributed to propeller interaction. We therefore propose that most of the seal carcasses displaying spiral lacerations in the UK are caused by grey seal predation. Cases in other locations should be re-evaluated using the scoring system presented here to identify whether grey seal predation is a major cause of mortality in phocid seals.