These photos were taken as the sun was setting, from Stage Fort Park, on my way home from Manchester last night. How beautiful to catch a glimpse of this grand ship anchored in our harbor and adjacent to the Eastern Point Lighthouse. Folks enjoying dinner at the park were referring to it as the “pirate ship.” Here in Gloucester Harbor for one night only, Rhode Island’s tall ship the Oliver Hazard Perry will be returning in September.

Also from Stage Fort Park ~ windows onto the harbor

Thanks to Scott Memhard for the heads up that the magnificent Oliver Hazard Perry was docking at Cape Pond Ice this morning. While the Ice House crew provided the ship with water, which takes several hours, the Perry crew took a tour of Cape Pond Ice and then had an hour to tour around Gloucester. The OHP takes no passengers, everyone aboard is a working crew member or working student.

Although this is the Perry’s maiden voyage, the captain and crew did an excellent job docking the ship. She is anchored at Rockport Harbor this evening. The Oliver Hazard Perry will be returning to Gloucester in September for a longer stay and at that time, the public will be able to tour the ship. See my post from yesterday with photos of the Oliver Hazard Perry sailing into Gloucester and a link to track the Perry. 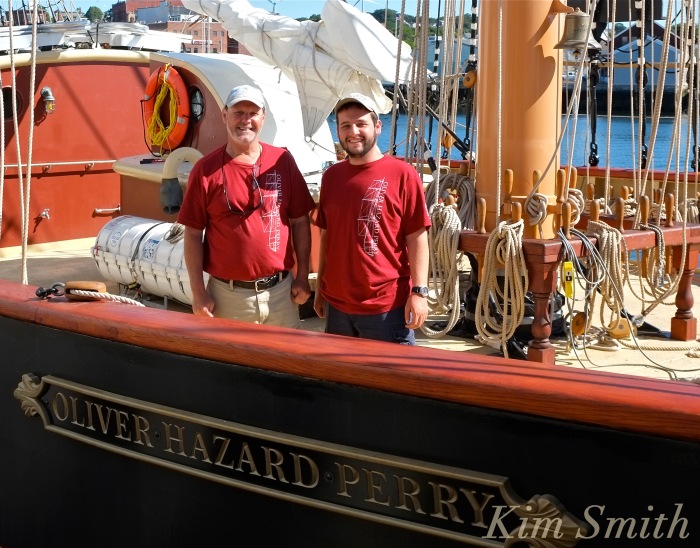 What a beauty of a morning for the Oliver Hazard Perry to visit Cape Pond Ice on Monday.  here is some information on this ship.

Wanna guess where the Oliver Hazard Perry is Right Now? You don’t have to – click the link and you’ll see she’s here!

(Thank you Joey for adding this link!)

Wow and double wow! What a treat to see this splendid ship up close!!!

Many thanks to Paul Morrison and his sister Kathy. Paul called a few days ago with the very generous offer to show me the osprey nest on the Annisquam, spotted by Kathy, about half a mile from the Marina, and best seen by boat. On the way to see the nest, we spied the Oliver Hazard Perry just beginning to make its way into Gloucester Harbor. Paul, again very generously, suggested we detour out to see the arriving tall ship. And it is a beauty! The Oliver Hazard Perry will be in Gloucester Harbor for one night only however, look for its return in September, when it will remain in Gloucester a few days. I believe, at that time, folks will be able to tour the boat!

The Oliver Hazard Perry is the largest civilian sailing vessel in the United States and the first of its kind to be built in over 100 years. Its mission statement is to, “provide innovative and empowering education-at-sea programs to promote personal and professional growth.”

Read lots more about the Oliver Hazard Perry on the ship’s website here.

About the ship, from the ships’s website: The hull for this new ship was initially begun in Canada and continued at various shipyards in Rhode Island since 2008. These included; Promet in Providence, Senesco in North Kingston,Newport Shipyard and she is now being commissioned in Portsmouth at the Hinckley Marina. Once complete she will move to Newport to the new dock at Fort Adams.

The Check out the construction of our vessel through our blog or through Narragansett Bay Shipping.

We are grateful for the support of a number of marine trade partners who have been an instrumental part of this magnificent project.

The success of SSV Oliver Hazard Perry relies on the generosity of donors and supporters, both large and small, from individuals and businesses to corporations, so please consider making a generous gift or donation today.