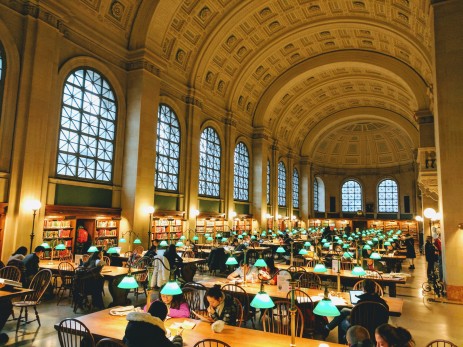 As do towns! The proposed new building (Dore & Whittier/Matt Oudens) related to the Sawyer Free Library is landing at the tail end of the visioning trend called out in this  Atlantic article by Alia Wong:

“College Students Just Want Normal Libraries: Schools have been on a mission to reinvent campus libraries—even though students just want the basics.”

“Likely in the hopes of proving that they have more to offer than a simple internet connection does, many college libraries are pouring resources into interior-design updates and building renovations, or into “glitzy technology,” such as 3-D printers and green screens, that is often housed in “media centers” or “makerspaces.”

“Yet much of the glitz may be just that—glitz. Survey data and experts suggest that students generally appreciate libraries most for their simple, traditional offerings: a quiet place to study or collaborate on a group project, the ability to print research papers, and access to books.”

“So-called digital natives still crave opportunities to use libraries as libraries, and many actively seek out physical texts—92 percent of the college students surveyed in a 2015 study, for example, said they preferred paper books to electronic versions. (Plus, a growing body of evidence shows that physical books and papers are more conducive to learning than digital formats are.) The dean of learning and technology resources at one of the six campuses of Northern Virginia Community College (NOVA) recently told me about a student he had met: Upon learning that her campus library had only the e-book version of a text she needed to read, the woman opted to make the trek to another campus a nearly half-hour commute away that had the hard copy. A 2016 survey of students at  Webster University in Washington, D.C., also illustrates limited use of digital resources, finding that just 18 percent of students accessed e-books “frequently” or “very frequently,” compared with 42 percent who never used them.

“Duke University’s 2016 survey of its students drew similar conclusions, finding that book delivery was one of the most important services to students; fancy library services such as instant messaging or data-visualization help fell much lower on students’ priority lists. A separate, years-long project on community-college students by the NOVA dean and a team of researchers found that respondents “most often view the library as the service provider they would likely go to” for an array of bread-and-butter needs, such as help gathering research for a paper, registering for classes, or applying for financial aid. Demand for access to devices such as 3-D printers and virtual-reality headsets was relatively low; respondents tended to highlight the need for reliable Wi-Fi instead.

“Many college libraries are reinventing themselves, but perhaps they’re trying to fix an institution that isn’t, in fact, broken…”

Rockport Library has dedicated quiet conversation and reading spaces as do Beverly, Quincy and Boston.