Lost of folks are asking, are the Piping Plovers nesting in the Good Harbor Beach parking lot? The answer is no, the Piping Plovers are nesting on the beach near boardwalk #3. The mama and papa, and now chicks, that are running all around the GHB parking lot are a shorebird named Killdeers. Comparatively quite a bit larger, and more commonly seen, Killdeers are related to Piping Plovers, but are a different species.

That I am aware of, this is the second year in a row Killdeers have chosen to nest at the Good Harbor Beach parking lot. It is frightening to see the babies zoom in and out between the cars. The mom and dad give vocal cues to the chicks, but still they run willy nilly. Killdeers have a fondness for human modified habitats, such as the GHB parking lot, and a willingness to nest close to people.

Like Piping Plover chicks, Killdeer chicks are precocial. That is a word ornithologists use to describe a baby bird’s stage of development at birth. Precocial means that shortly after hatching, the bird is fully mobile. Plover chicks are not completely mature, they still need parents to help regulate their body temperature, but they have downy feathers and can run and feed themselves within moments after emerging. The opposite of precocial is altricial. Birds that hatch helpless, naked, usually blind, and are incapable of departing the nest are altricial. Robins and Cardinals are examples of altricial birds.

If you encounter the Kildeer family and would like to take a photo, or simply observe these adorable babies on-the-go, my advice is to stand quietly and don’t chase after them. Running after the chicks will put the parents into panic mode and they may lose sight of the other siblings. As the chicks mature, they will spend less time in the parking lot, and more time in the marsh and at the tidal river edge. Kildeer adults, and even the chicks, are actually good swimmers. Last year the Kildeer family crossed the tidal river and spent the second half of the season on the opposite side of the marsh. 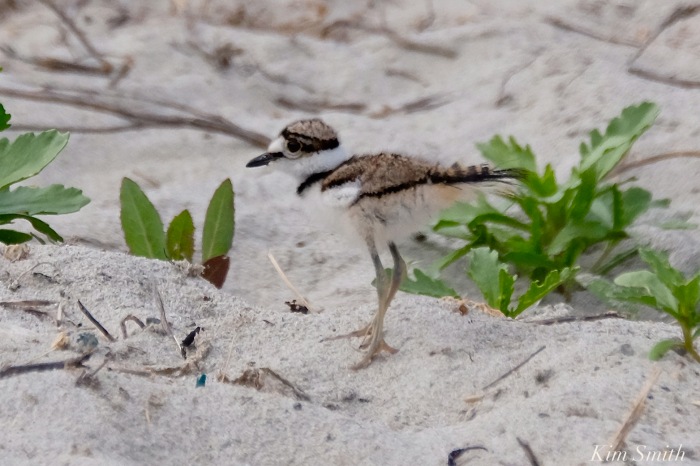 Compare the Killdeer chick above, to the Piping Plover chick below. 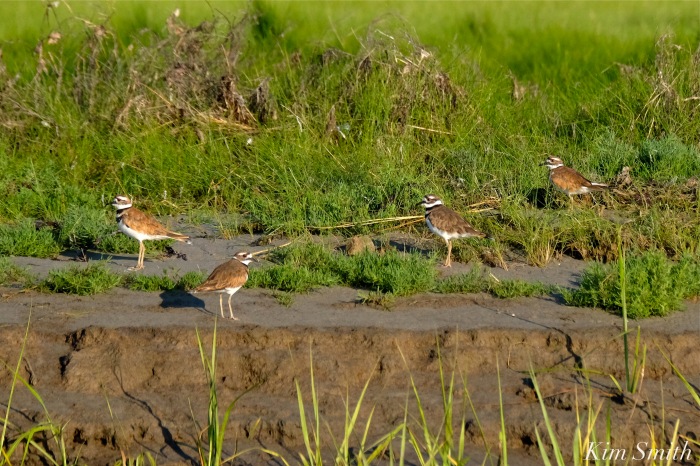 Killdeer Family all grown up, September 2016