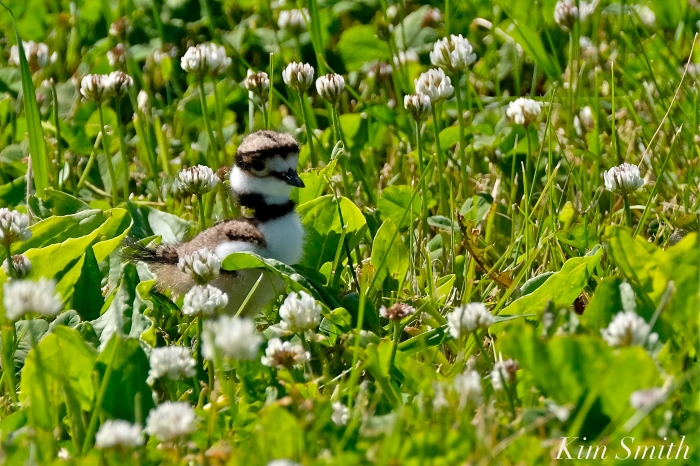 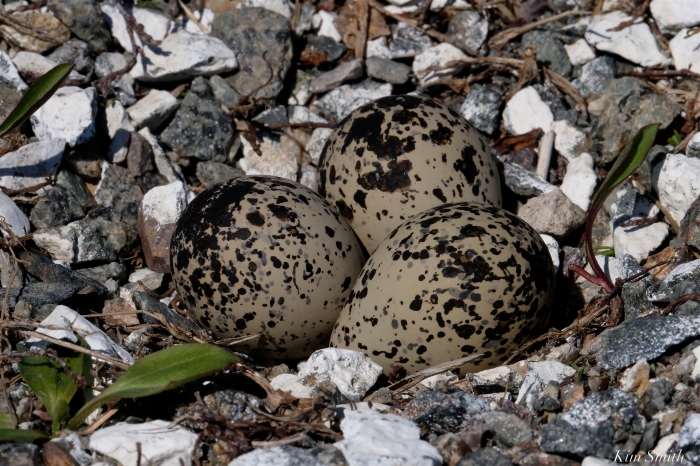 The Good Harbor Beach Killdeers first laid eggs in the parking lot, very close to where the Piping Plovers also had a nest scrape. After only several days, the eggs disappeared but the pair soon re-nested along the parking lot edge.

Just as do PiPl chicks, Killdeer chicks are able to feed themselves shortly after hatching; they seem to come out running and only need their feathers to dry before feeding. The chicks learn the parent’s voice commands very early on in their development and at only a few days old, the brood will immediately freeze as soon as the adults give out a warning. The name Killdeer comes from the easily recognized and oft heard call of the adults, a loud, shrill ‘kill-dee, kill-dee.’ 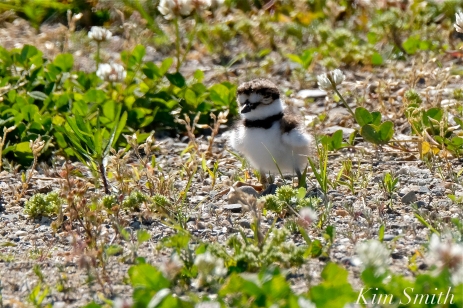 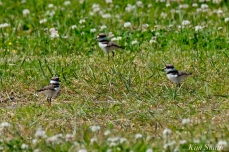 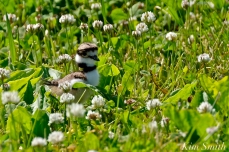 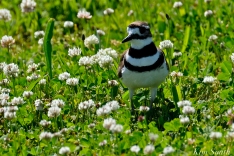 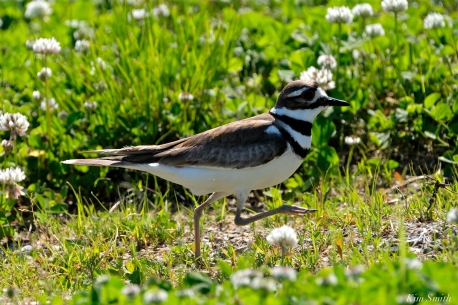 The first nest was located in the dunes, the second on the edge of the parking lot. The staff at the GHB parking lot placed two large stones on either side of the nest. A week or so later, an orange cone. 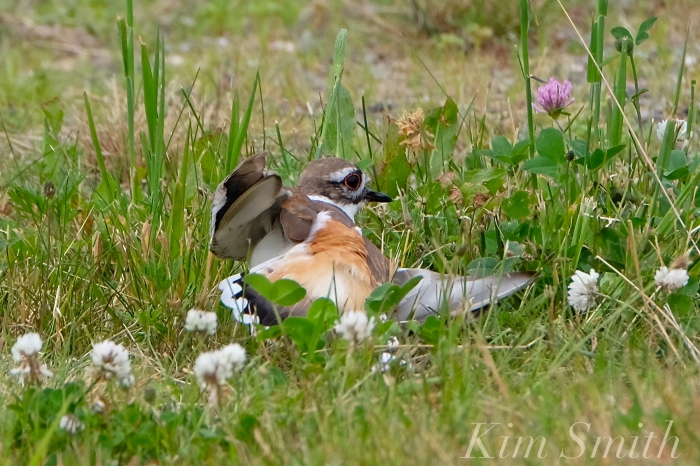 Mama and Papa Killdeer successfully distracted many a beach goer from getting too close to to the nest with their broken-wing distraction display.

Killdeers are a species of plovers, as are Piping Plovers, Semi-palmated Plovers, Black-bellied Plovers, and Wilson’s Plovers. It takes about the same amount of time for the eggs to incubate, approximately 24-28 days. 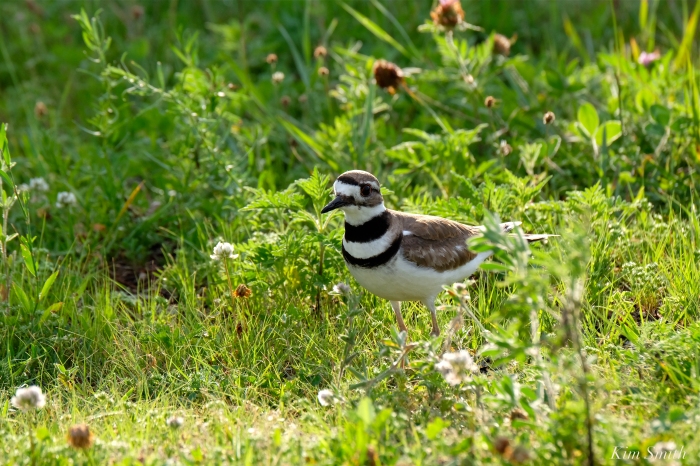 Both male and female Killdeers brood the eggs. It is not easy to tell the difference between the male and female unless side-by-side. The male is typically a bit larger than the female.

Three of the eggs had hatched by nightfall, the fourth hatched early the next day. This new little Killdeer Family safely made it out of the parking lot the day after hatching, heading into the marsh, just as did the brood that hatched earlier in the summer.

You may recall that several weeks back we posted a photo of a Killdeer nest with four eggs. I only discovered the nest because each and every time anyone walked past, a Killdeer would call shrilly and drag its wings through the dunes in a dramatic display of “broken wing” trickery. I would often play along and see how far away the Killdeer would take me until one morning I decided to see what it was they were hiding.

Off to the side of the path that leads to the beach, not more than six feet away, was a loose scrape of dirt and sticks, with four perfect Killdeer eggs!

I had no idea when they had been laid, so there was no way of knowing when the chicks would hatch. Each morning on my way to check on the Piping Plovers I’d take a peak, until one day there weren’t any. How sad I thought, and wondered if a predator had eaten the eggs. But the nest had not been disturbed and there were no broken egg shells. A mystery. 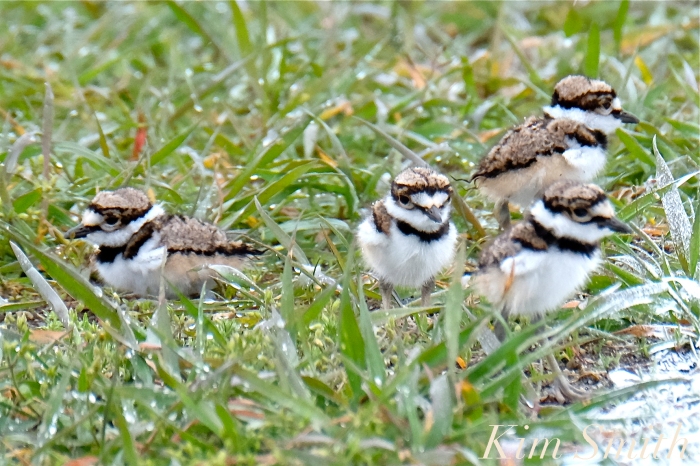 The following morning I checked on the Piping Plover nest in the parking lot. It was drizzly but there were two Killdeers near to where the PiPl exclosure is located. I sat in my car watching the adult Killdeers when to my delight and amazement, out tumbled four teeny chicks from under Mama Killdeer. A car makes the perfect blind and for quite some time I photographed and filmed the Killdeer family.

Off and on during that rainy day I stopped by to check on the Killdeers. Because of the weather, the parking lot was virtually empty. Tiny tufted black, brown, and white feather balls atop overly long spindly legs, the baby birds spent all their time zooming here and there, foraging on itsy bitty insects in the grass and gravel.

When not foraging, they would run under Mom or Dad to warm up on that damp drizzly day. Just like Piping Plover chicks, Killdeer chicks are precocial birds and can feed themselves within hours after hatching however, because they are so tiny, they lose body heat relatively quickly. The chicks need the warmth provided by snuggling under Mom and Dad. 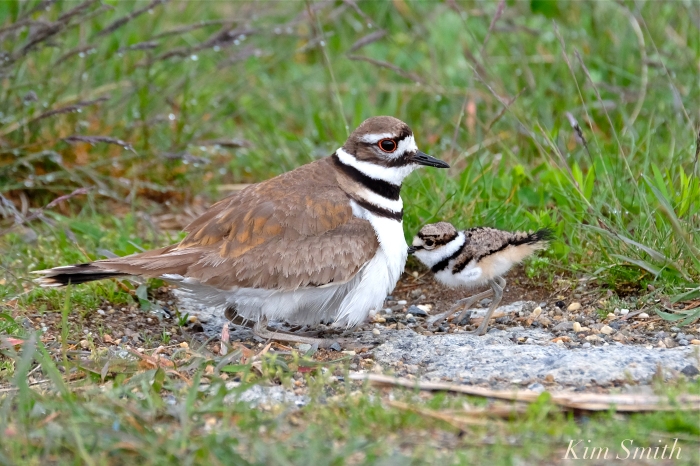 The next morning it was still drizzling, and the Killdeer family was still in the same location! I watched them for a bit, when a man showed up with his dog. The Killdeer parents went into high alert and did their best distraction displays. The dog chased the adult Killdeers around the parking lot while I spoke with the man. It is the same man who brings his dog to Good Harbor Beach via the footbridge end at the close of the day, after the lifeguards and dog officers have left. This was a tremendous problem last year after the Piping Plovers hatched. Last summer I was too busy preventing his dog from squashing a PiPl chick to get his license plate number, but not this time. The man and his dog left the parking lot.

Moving to the marsh

Shortly after the dog encounter, both Killdeer parents led the chicks into the marsh. To see the chicks navigate over the incline at the edge of the marsh was amazing; it must have seemed like fording a mountain to them. I’ve looked but have not seen the family since. I am hoping that they are thriving and growing in the marshland.

We don’t hear as much about Killdeer Plovers because they are not an endangered species. Killdeers are found in every state of the continental US, Alaska, Canada, Mexico, Central and South America. They are the least shorebird-like of shorebirds because they breed and dwell in many types of habitats including grasslands, fields, urban areas, gravel pits, airports, parking lots, athletic fields, and golf courses. Despite their super ability to adapt to human habitats, it is a species in decline.

Killdeers begin courting in our area in March. Although I imagine they have been nesting at Good Harbor Beach for a longer period of time, I only have a record of Killdeers nesting at GHB going back three years and it is yet another important reason as to why humans and pets should not be traipsing through the dunes.

It is difficult to tell the difference between a male and female Killdeer unless they are side-by-side, and even then, still challenging. The male is a bit larger. 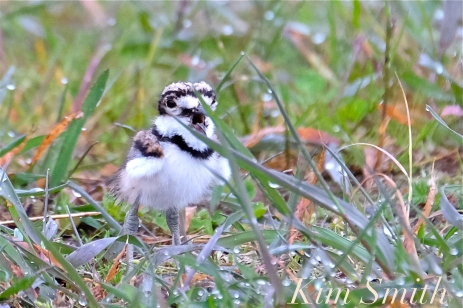 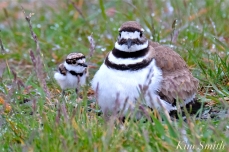 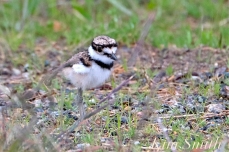 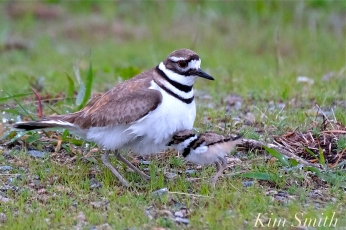 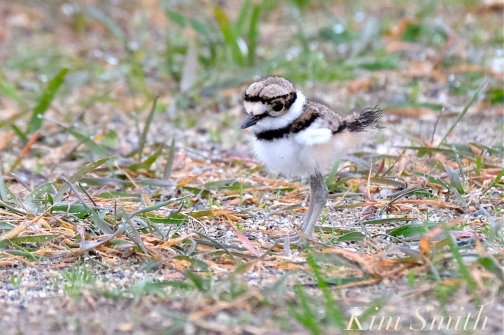 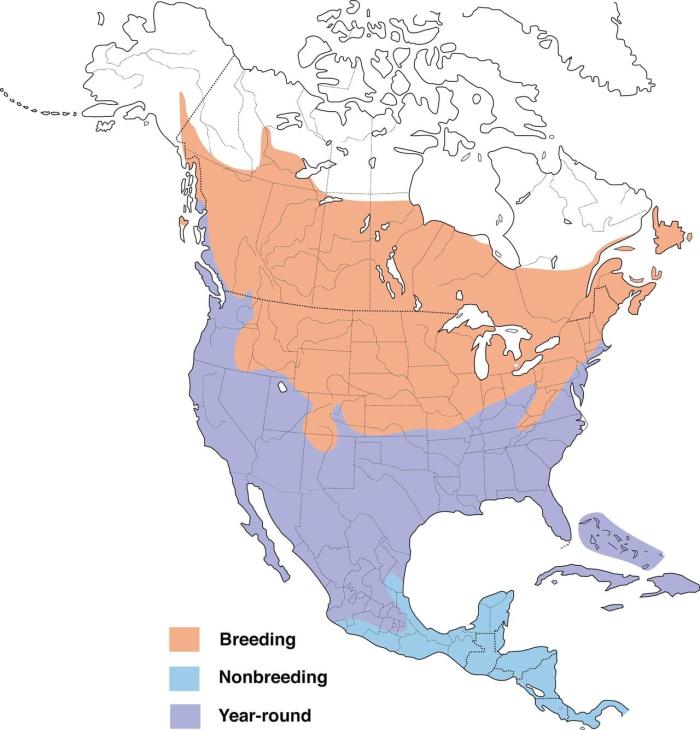 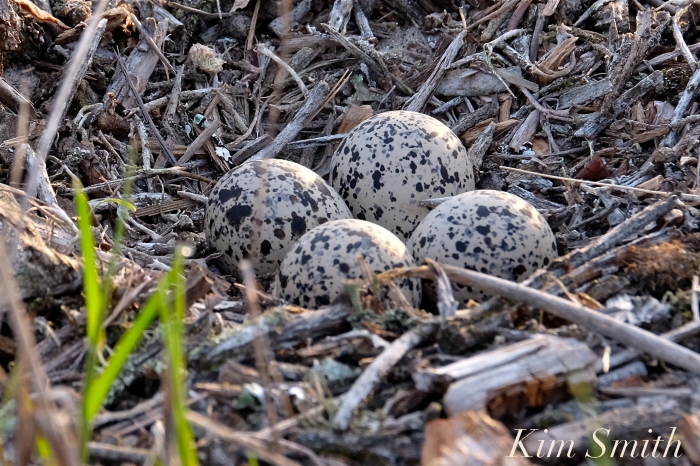 Pictured above are the beautiful mottled eggs of a different species of plover, the Killdeer. Notice how the Killdeer eggs look similar to the PiPl eggs, but are a deeper gray. Killdeers make their nest scrapes on the ground, just as do PiPl, but in gravel and soil, and the darker colored eggs are perfectly camouflaged amidst the sticks and stones. Piping Plover eggs are beautifully camouflaged when laid in sandy nest scrapes. 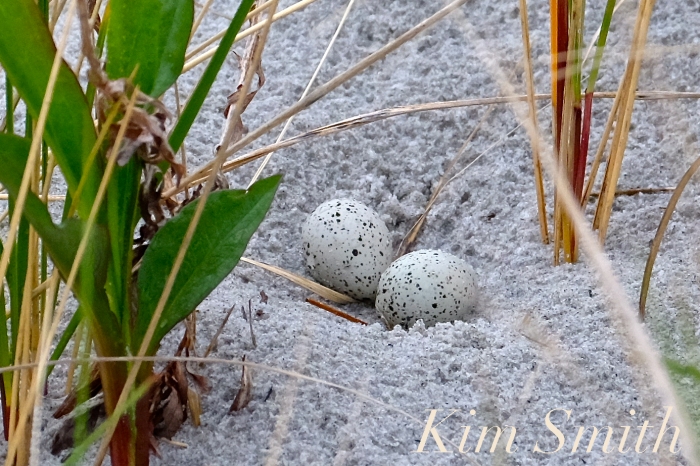 Lost of folks are asking, are the Piping Plovers nesting in the Good Harbor Beach parking lot? The answer is no, the Piping Plovers are nesting on the beach near boardwalk #3. The mama and papa, and now chicks, that are running all around the GHB parking lot are a shorebird named Killdeers. Comparatively quite a bit larger, and more commonly seen, Killdeers are related to Piping Plovers, but are a different species. 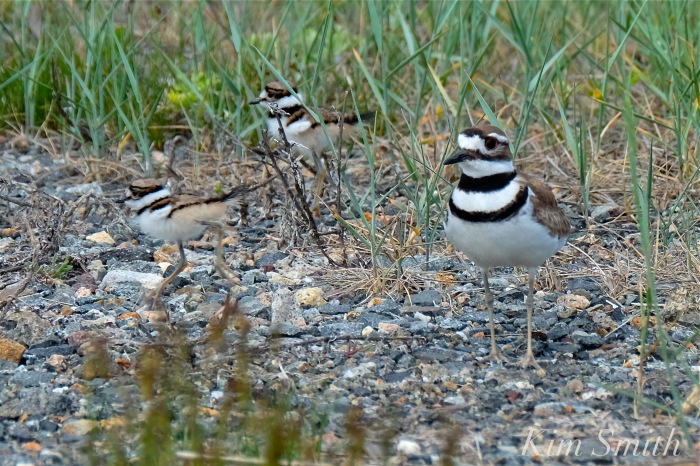 That I am aware of, this is the second year in a row Killdeers have chosen to nest at the Good Harbor Beach parking lot. It is frightening to see the babies zoom in and out between the cars. The mom and dad give vocal cues to the chicks, but still they run willy nilly. Killdeers have a fondness for human modified habitats, such as the GHB parking lot, and a willingness to nest close to people.

Like Piping Plover chicks, Killdeer chicks are precocial. That is a word ornithologists use to describe a baby bird’s stage of development at birth. Precocial means that shortly after hatching, the bird is fully mobile. Plover chicks are not completely mature, they still need parents to help regulate their body temperature, but they have downy feathers and can run and feed themselves within moments after emerging. The opposite of precocial is altricial. Birds that hatch helpless, naked, usually blind, and are incapable of departing the nest are altricial. Robins and Cardinals are examples of altricial birds.

If you encounter the Kildeer family and would like to take a photo, or simply observe these adorable babies on-the-go, my advice is to stand quietly and don’t chase after them. Running after the chicks will put the parents into panic mode and they may lose sight of the other siblings. As the chicks mature, they will spend less time in the parking lot, and more time in the marsh and at the tidal river edge. Kildeer adults, and even the chicks, are actually good swimmers. Last year the Kildeer family crossed the tidal river and spent the second half of the season on the opposite side of the marsh.

Compare the Killdeer chick above, to the Piping Plover chick below.

Killdeer Family all grown up, September 2016