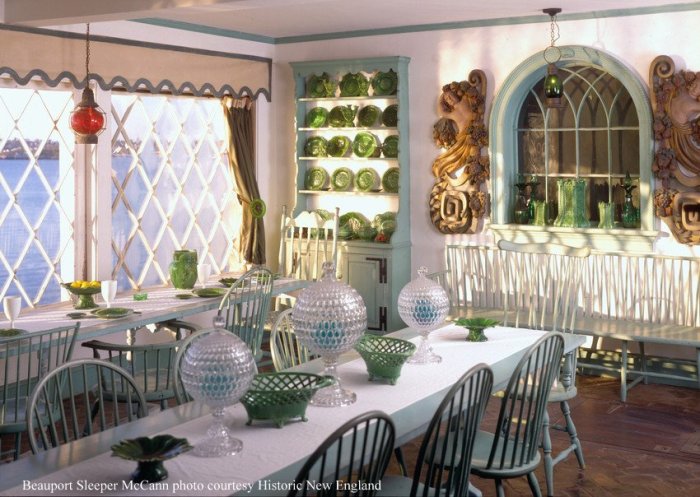 Harvard Magazine, May-June 2018,  “Gloucester’s Beauport Mansion” by Nell Porter Brown is well done, sprinkled with quotes from site manager Martha Van Koevering, and with special upcoming tour announcements for the season at this Historic New England property, 75 Eastern Point Blvd, Gloucester, Mass., open May 26-October 13. Beauport was designed by Henry Davis Sleeper and executed by and with architect Halfdan Hanson. One must go and go again to Beauport!

“Sleeper’s brother inherited Beauport, but couldn’t afford to keep it. In 1935, the conservation-minded Helena Woolworth McCann, heir to the Woolworth department store chain, bought the mansion and preserved it virtually as Sleeper had left it. The McCann family spent several years summering there, but by 1941 both she and her husband had died. Their children, knowing their mother’s wish that Beauport be preserved as a house museum, donated it to Historic New England with the caveat that they could stay there whenever they wanted. One of them often did, into the 1970s, amicably closing the door to her quarters in the “Red Indian” room when tours came through. And therein lies much of Beauport’s appeal. It’s not…” 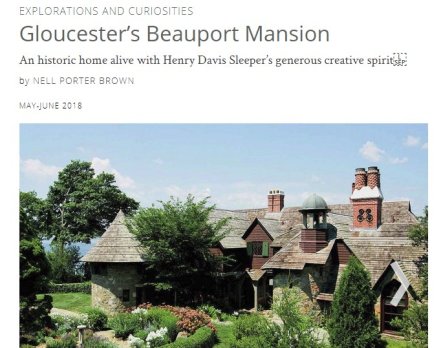 We are on this incredible tour at Beauport, the Sleeper-McCann House.  Descendants of both Sleeper and Hanson are here! This special programming duet was brought together by two Gloucester institutions, the Cape Ann Museum in collaboration with Historic New England’s Beauport property, inspired by the Cape Ann Museum’s Design/Build exhibition.

END_OF_DOCUMENT_TOKEN_TO_BE_REPLACED

it’s tough to get an idea of the scale of this sofa and chairs from this picture. I wish the Mrs was sitting in them so you could get an idea of hof massive they were.

This picture does not represent the proper light in the room but it really was beautiful in a funky eclectic sort of way.

I can’t attest for the rooms as I didn’t get past the lobby, but the decor was sexy as hell. Those Victorian style chairs were way oversized. I’ve never seen such bold statements in decor in person. The only thing that might have come close was Graceland as far as over the top design in a small space.

It’s not demure, it’s not understated, they went for it in a big way. This probably wouldn’t work in too many places but it works here in South Beach.

Click here for a slideshow of this gorgeous over 55 community being built in West Gloucester.

The interior design was done by Sheila Whalen of Timeless Interiors of Prides Crossing Beverly.