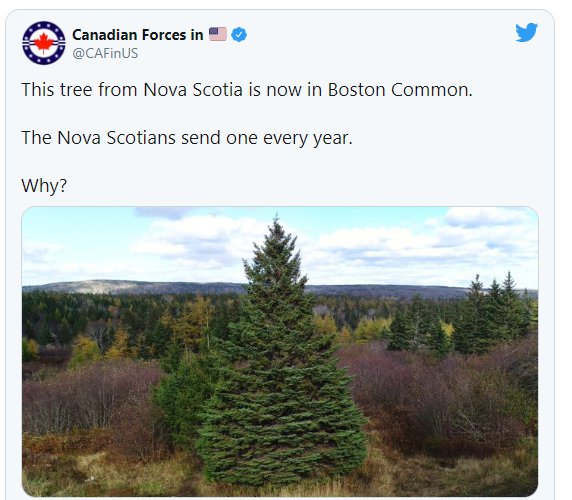 Follow the excellent thread to learn more about Canada’s annual remembrance and giving tree; its history concerns a disaster as catastrophic as the Johnstown Flood.

This tree from Nova Scotia is now in Boston Common.

The Nova Scotians send one every year.

There are many Nova Scotia ties in Gloucester, too. Canadians immigrants, especially ones born on the east coast, settled throughout Massachuestts. Canadian born fishermen worked and lived in Gloucester. More than 1200 Nova Scotians went down to the sea and are memorialized here.

Thanks to the Tarr family, Gloucester has an annual tree from Nova Scotia. Read more about this year’s journey to install the tree from Shelburne Falls at Kent Circle.

Attending the anti-Nazi demonstration in Boston was an event I won’t soon forget. The day began really well, with a fantastic interview of our GMG podcast guests, the playwright Israel Horovitz, and Gloucester Stage Company’s Heidi Dallin and Emme Shaw. Israel fills the room with his stories and Joey knows how to bring out the best of them. After the podcast, I stopped home and had a quick lunch with Jessica while getting kisses in for our granddaughter (and return smiles!). Jessica, Tom, and I discussed transportation strategies for attending the demonstration. The Blueline was decided upon, which as it turns out was so easy, I would take this route again without hesitation. It only took forty-five minutes to drive to Wonderland Station in Revere and parking is free on the weekends.

I am unfamiliar with purchasing train tickets from a machine and rather than holding up the other passengers, I suggested to the woman next in line that she go first. She laughed and said she would help. She was a woman of color, a beautiful brown color, and within moments I had my Charlie card. This was the first of several incidences of needing assistance throughout the afternoon. The train pulled into the station and off we headed to Government Center.

Disembarking from the train and entering the plaza, the streets were so quiet you would never know that only a few blocks away were throngs of thousands. There were tourists with cameras, families and young couples mostly, sightseeing and photographing. The walk from Government Center Plaza to the State House is rich in American history, and there were even tourists on the Common, seemingly unfazed by the demonstration underway.

At the State House entrance to the Commons, you could see tens of thousands counter protesters rallying, carrying signs, and chanting anti-hate and anti-fascist slogans. I am frankly not a person who feels safe in large crowds. But I have faced my fear twice this year, once for the Women’s March and yesterday, because I wanted to go to this demonstration for no other reason than to be one of a hundred million people-strong looking clearly into the eye of fascism to say, you will never gain power in America.

I held my breath and walked into the crowd. Along the criss-crossing paths of the Common were people of all ages and colors, in small groups and large, holding handmade signs and talking about their vision for America. My fear of crowds began to lessen, and at one point a young man, also of a beautiful brown color, lent me his hand so that I could stand on a bench to take a photo.

As I headed deeper into the crowd, a scuffle suddenly broke out. I was quickly caught in a rush of people and as I struggled to get out of the way, an older couple, also of beautiful brown colors, pulled me towards them. They were standing under a tree and instructed do not run, but “stand beneath this tree with us.” After a few minutes, the fighting ceased and we made our way together out of the center of the Commons.

Along Beacon Street, which was closed to traffic, there seemed to be a police headquarters of sort. This was also where the largest group of counter protesters had gathered. They had a megaphone and were leading the crowd in chants — “Black Lives Matter,” “No Trump, No KKK, No Fascist USA, and “Whose streets? Our streets.” In repeated situations of high tension and raw emotions, the police kept their cool, handling haters and troublemakers with clarity of strategy and with lightning speed.

I left the rally at three o’clock and saw news footage taken later in the day, of police and counter protesters together chanting anti-hate slogans. I have to say I am so tremendously proud of the people of Massachusetts for coming together to protest peacefully for the love of their fellow man and humanity for all. #bostonstrong.

I overheard this man say that he stitched his flag together the night before the protest, with no prior sewing experience.

Forty thousand anti-Nazi demonstrators sent John Medlar and his cowardly band of fascists packing, after only one hour into what was meant to be a five-hour rally. The throngs of anti-white supremacy demonstrators gathered on the Boston Common was made of a diverse coalition. The great majority were there to protest peacefully.

The man in the red shirt getting arrested.

There were heated moments, with approximately two dozen arrests, but the well-prepared and cool heads of Boston Police officers prevailed.

Hate groups are not welcome in Boston.

Chants such as “Black Lives Matter,” “Whose streets? Our streets,” and “No Trump, No KKK, No Fascist USA.” rang loud and clear throughout the Boston Common.

Bas-relief of Robert Gould Shaw and the Massachusetts 54th Regiment marching down Beacon Street, located on the Boston Common, opposite the State House. The Massachusetts 54th Volunteer Infantry was the first documented African American regiment formed in the north, in 1863. Bronze bas-relief by Augustus Saint-Gaudens.

I’m sharing on behalf of Veterans Director, City of Gloucester that went to Boston for this event.

Thought you might want to see these, from the common in Boston, over 33,000 flags were placed and they read off the names of those from the Commonwealth who were killed in action in Iraq and Afghanistan (The parents of the young men who were killed read the names, it was really tough to get through).

I spent yesterday in Boston with Grandkid #1. A beautiful day! Walked the Commons, shopped, met up with a friend who took us to dinner at Tremont 647. Great company, fun day.

On Boylston we bumped into a motley group of bicyclists. We found out that this was a Critical Mass ride which  is a bicycling event typically held on the last Friday of every month in over 300 cities around the world. The ride was originally founded in 1992 with the idea of drawing attention to how unfriendly the city was to bicyclists. Click on this photo to find out more about Critical Mass. 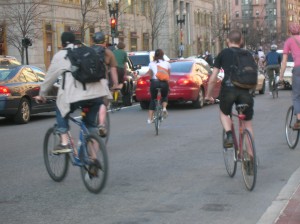