Last Friday’s James Montgomery show jam packed Cape Ann Marina’s Waterfront Pavilion (the BIG tent next to Mile Marker One) and VIP was sold out. The photo on the right shows how close the VIP seats are to the stage.

Wouldn’t you like to be this close to Henri Smith and his band New Orleans Friends & Flavours featuring Grammy-winning sax & flute player Amadee Castenell?

You can still get VIP seats (right here), but they won’t last long.  Plus you’ll be supporting Cape Ann YMCA Camp & Teen Services.

Don’t be one of those people who comes at the last minute and then complains that all the best seats are taken.  DO IT NOW!

Here’s a shot of the VIP section from behind the last row of VIP. 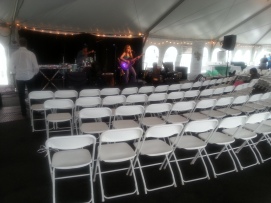 Isn’t this where you want to be on Friday night to kick off the Schooner Festival?

Check out this video of Henri Smith’s sold out Mardi Gras 2013 concert at the Larcom Theatre in Beverly.