Deborah Cramer thanks Good Morning Gloucester for mentioning her book and asks for photographs and stories about horseshoe crabs, otherwise known as the nearly scene stealing co-stars from her inspiring book on red knots (sandpiper shorebirds), The Narrow Edge.

“I’m in the midst of a project right now trying to uncover the almost forgotten history of the whereabouts of horseshoe crabs in Gloucester.  I’ve heard some fantastic stories, like one from a man who used to go down to Lobster Cove after school and find horseshoe crabs so plentiful he could fill a dory. Do you think there’s a value to putting up a few pictures on GMG and asking people to send in their recollections of beaches, coves where they used to see them in abundance?”

We do. Please send in photos or stories if you have them about horseshoe crabs in Gloucester or the North Shore for Deborah Cramer’s project. Write in comments below and/or email cryan225@gmail.com

Here’s one data point. Look closely at this 1869 Winslow Homer painting. Can you spot the horseshoe crabs? Can you identify the rocks and beach?

While reading The Narrow Edge, and looking at Kim Smith’s Piping Plover photographs, I thought about Raid on a Sand Swallow Colony (How Many Eggs?) 1873 by Homer and how some things change while much remains the same.When my sons were little, they were thrilled with the first 1/3 or so of Swiss Family Robinson.  As taken as they were with the family’s ingenuity, adventure, and tree house–they recoiled as page after page described a gorgeous new bird, promptly shot. They wouldn’t go for disturbing eggs in a wild habitat. The title ascribed to this Homer, perhaps the eager query from the clambering youngest boy, feels timeless. Was the boys’ precarious gathering sport, study, or food? What was common practice with swallows’ eggs in the 1860s and 70s? Homer’s birds are diminutive and active, but imprecise. Homer sometimes combined place, figures, subject and themes. One thing is clear: the composition, line and shadow are primed and effective for an engraving. 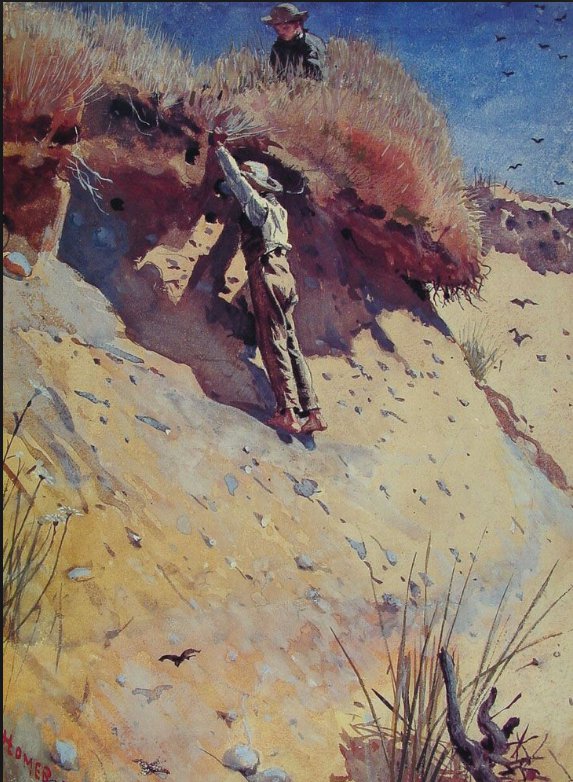 Harper’s Weekly published the image on June 13, 1875. Artists often drew directly on the edge grain of boxwood and a master engraver (Lagrade in this case) removed the wood from pencil and wash lines. 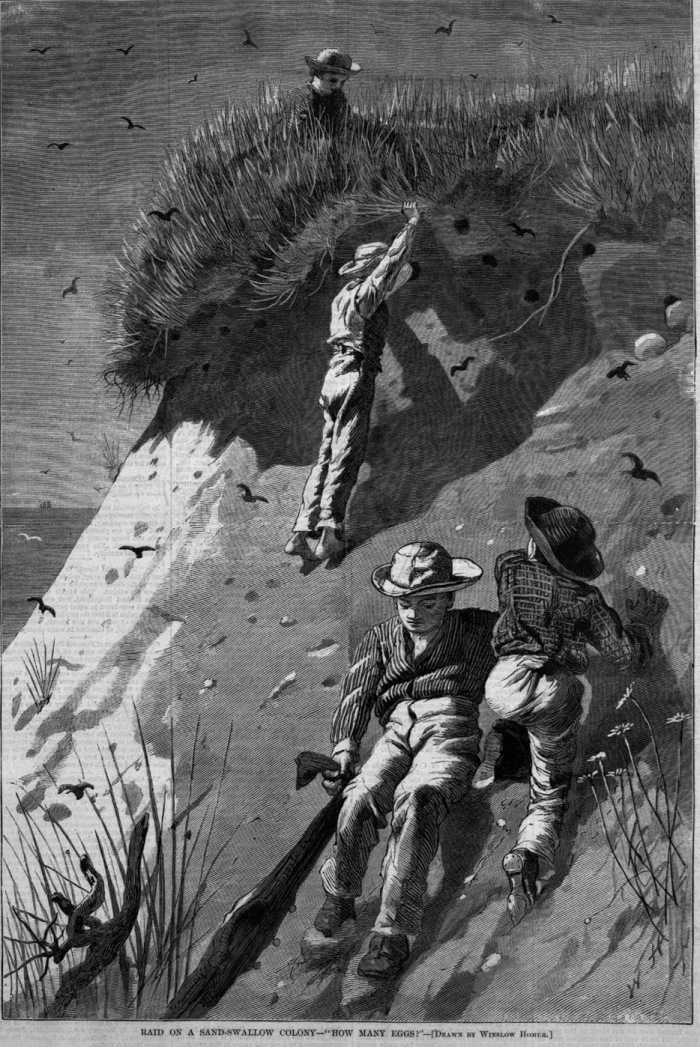 END_OF_DOCUMENT_TOKEN_TO_BE_REPLACED

GLOUCESTER, Mass. — As the spring days lengthen, shorebirds have begun their hemispheric migrations from South America to nesting grounds in Canada’s northern spruce and pine forests and the icy Arctic.

They are among Earth’s longest long-distance fliers, traveling thousands of miles back and forth every year. I have watched them at various stops along their routes: calico-patterned ruddy turnstones flipping tiny rocks and seaweed to find periwinkles or mussels; a solitary whimbrel standing in the marsh grass, its long, curved beak poised to snatch a crab; a golden plover pausing on a mud flat, its plumage glowing in the afternoon sun.

I used to think that sandpipers flocking at the sea edge, scurrying before the waves, were an immutable part of the beach. No longer. This year, as the birds come north, one of them, the red knot — Calidris canutus rufa — will have acquired a new status. It is now listed as threatened under the federal Endangered Species Act. It joins four other shorebirds on the government’s list of threatened and endangered species.

Sadly, it is unlikely to be the last.

Deborah is the author of The Narrow Edge: A Tiny Bird, an Ancient Crab, and an Epic Journey, Yale University Press, 2015. Visit Deborah Cramer’s website here to order a copy.

“The Narrow Edge is at once an intimate portrait of the small red knot and a much larger exploration of our wondrous, imperiled world.”
—Elizabeth Kolbert, author of The Sixth Extinction

“In the face of global warming, is our big brain connected to a big enough heart that we might preserve the beauty of the earth we were given? Heart is no problem for the red knot”
—Bill McKibben, author of Eaarth

“I have a compass, GPS, and radio,” [Cramer] writes. “The birds have—what? By the end of this journey I am more in awe than when I began.” Follow her graceful writing for the full 9,500 miles and you will share in that awe.”
–Laurence Marschall, Natural History

“A book so multidimensional, yet somehow so admirably succinct, I wish I’d written it…”
—Carl Safina, author of Beyond Words: What Animals Think and Feel

“Perhaps the red knot should replace the canary in the mine as the harbinger of impending changes that are good neither for birds or people . . . essential reading for anyone interested in conservation.”
—Joel Greenberg, author of A Feathered River Across the Sky

“An eloquent exploration of our relationship to nature.”
—Nancy Knowlton, author of Citizens of the Sea

“A remarkable tale of science, nature, and humanity.”
—Susan Solomon, author of The Coldest March

“Cramer brilliantly presents us with an ecosystem of many parts.”
—Don Kennedy, Pr

Thanks to Lise Breen for mentioning Deborah’s op ed piece and new book!