For over a month our shores have been graced with a pair of Northern Pintails. These beautiful dabbling ducks aren’t extremely rare, but we are at the very northern edge of their winter grounds. And, too, they are a bird listed as in sharp decline by the North American Breeding Bird Survey.

The little duo are tremendously fun to watch. They are exhibiting very different behaviors, in large part I think because the male and female wing patterns are distinctly different from each other.

The female is super spunky. Her coloration is similar to a female Mallards, which makes her easily camouflaged amongst a mixed flock of ducks. She’s not intimidated by territorial behavior on the part of the Mallards and forages alongside the Mallards and American Black Ducks.

On the other hand, the male’s strikingly beautiful and unmistakable wing pattern sets him apart and at risk amongst the flock. He is elusive and if catches sight of a human, he makes a fast beeline to the opposite side of the pond. When feeding in a group, the Mallards and gulls attack him, easily able to latch onto his long elegant pintail and pull him down underwater (very disturbing to observe).

The female spends alternating time between foraging with the flock at the shoreline edge and dip dabbling with the male in the shallow water. Northern Pintails eat seeds, water bugs, crustaceans, snails, and grains, feeding in a variety of manners, dabbling, filter feeding, eating from the ground surface, and tipping-up in shallow water. 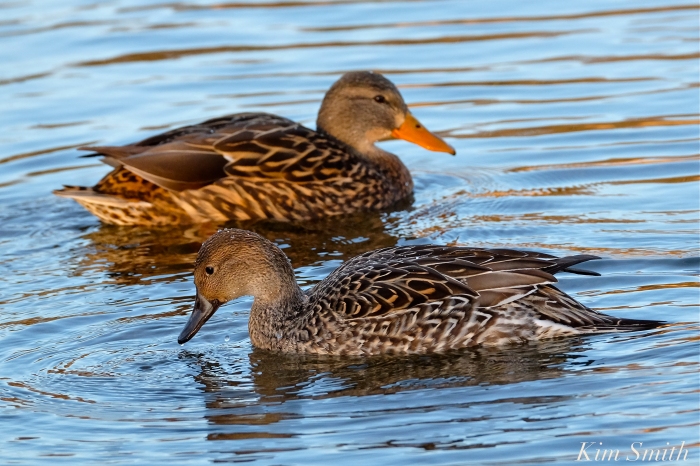 Female Mallards and female Northern Pintails are similar in appearance and it may be difficult to distinguish between the two. Here are some clues to look for:

2) The female Pintail has a longer neck.

3) A female Pintail’s bill is solid gray, whereas a female Mallards bill is mottled brown and orange.

4) The female Mallard has a blue stripe on her wing, the Pintail does not.

Notice the beautiful long neck of the female Pintail. 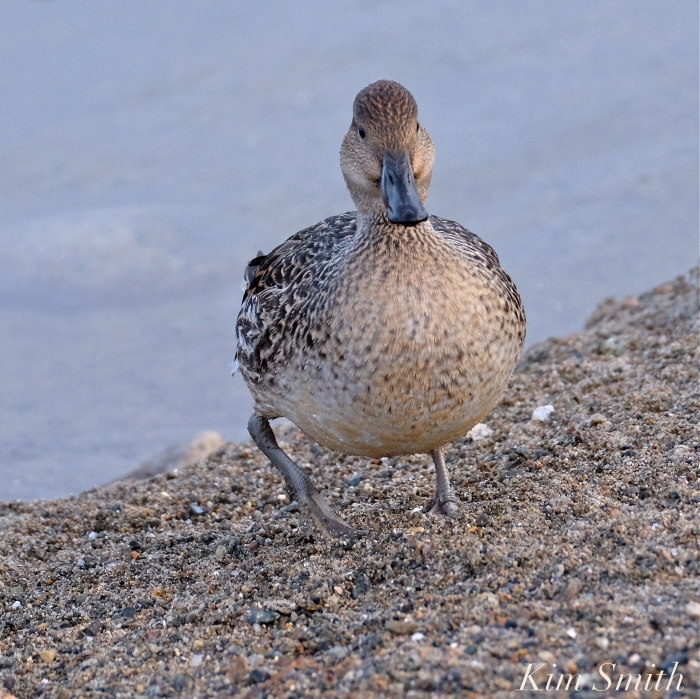 The female Northern Pintail’s bill, legs, and feet are gray in color.

Note the short stubby tail of the male Mallard in the foreground versus the Pintails long, thin elegant black tail feathers.

Papa Pintail has a beautiful buffy orange stripe and below that a forest green bar.

I hope so much the Pintail pair have chosen Cape Ann for their winter home. More photos to come!