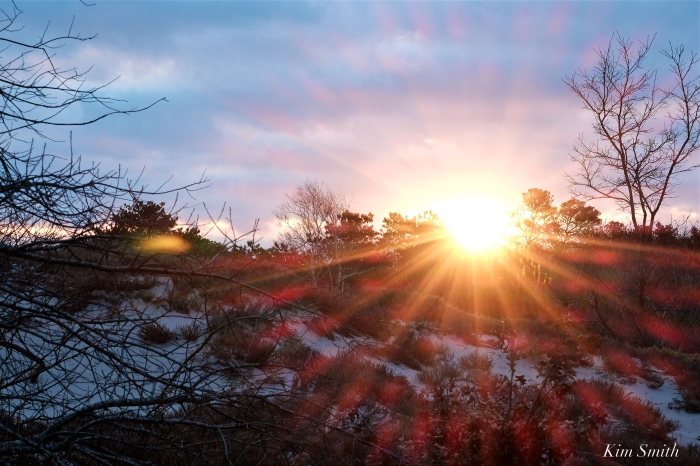 Jeff Denoncour, the Trustees of Reservations Eastern Region Ecologist, gave an outstanding and informative presentation to a packed audience Saturday afternoon. Subjects included the formation and history of Crane Beach, marsh, and dunes; the seven uniquely different ecological zones; the many species of flora and fauna that comprise the rich biodiversity at Castle Island; and the Trustees protective measures managing rare and endangered species.

Since 2010, Jeff has managed the Trustees Shorebird Protection Program at Crane Beach. Because of the very excellent shorebird management at Crane Beach, 2018 was a banner year, with 42 pairs of nesting Piping Plovers and approximately one hundred PiPl chicks fledged. Our community can learn a great deal from the success at Crane Beach in how to better manage shorebirds migrating and nesting at Cape Ann beaches. 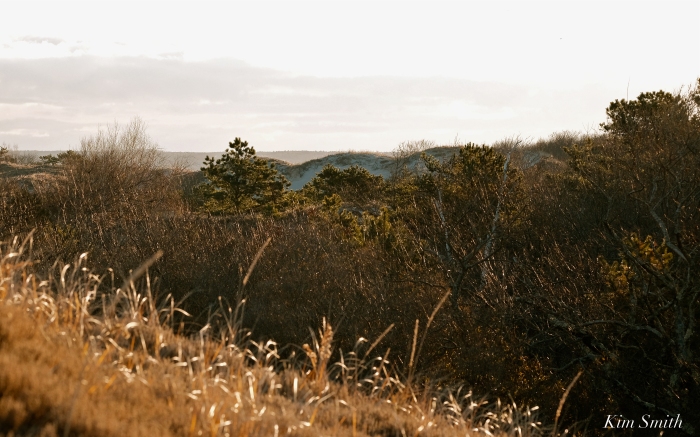 We learned from Jeff that Crane Beach is part of a string of barrier beaches formed from sediment deposited by the outflow of the Merricmack River. Salisbury Beach is at the northern end, then Plum Island, then Crane, with Coffins and Wingaersheek at the southern end. The sand that was deposited at Salisbury Beach is the coarsest; the sand at Wingaersheek the lightest and finest as it would have more easily flowed furthest away from the mouth of the river.

“Readers will be interested to know that our region’s Crane Beach continues to have one of their best year’s ever. Trustees of Reservations Jeff Denoncour shared information on the latest census data from 2018 and Crane Beach has a whopping 76 fledglings, with 25 more chicks still yet to fledge. Because of the huge success at Crane Beach, the northeast region, of which we are a part, has fledged a total 136 of chicks in 2018, compared to 108 in 2017, and as I said, with more fledglings still to come! The northeast region encompasses Salisbury Beach to the Boston Harbor Islands.

Jeff noted that this year they had less predation by Great Horned Owls. Because of owl predation, several years ago the Trustees gave up on the wire exclosures and now use electric fencing extensively. The Great Horned Owls learned that the Piping Plover adults were going in an out of the exclosures and began perching on the edge of the wire, picking off the adults as they were entering and exiting the exclosure.

Crane has an excellent crew of Trustees staff monitoring the Least Terns and Piping Plovers, as well as excellent enforcement by highly trained police officers. No dogs are allowed on Crane Beach during nesting season and dogs are prevented from entering at the guarded gate. As we saw from one of the graphics presented about nesting Double-crested Cormorants, when a dog runs through a nesting area, the adults leave the nest, temporarily leaving the eggs and chicks vulnerable to predation by crows, gulls, raptors, and owls.” 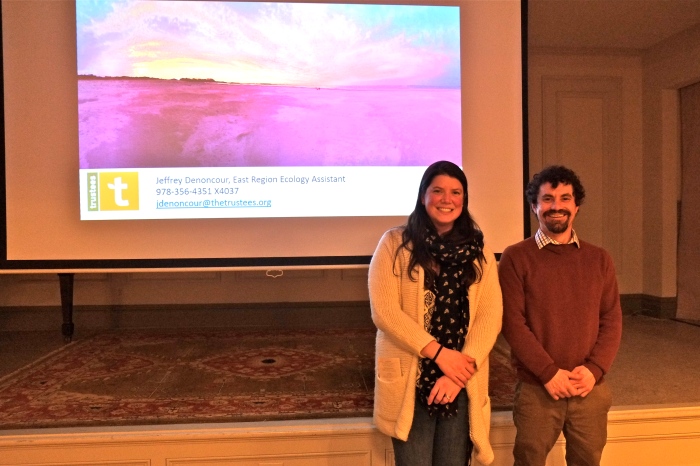 Jeff Denoncour and Courtney Richardson, Director of Education and Public Programs at the Cape Ann Museum 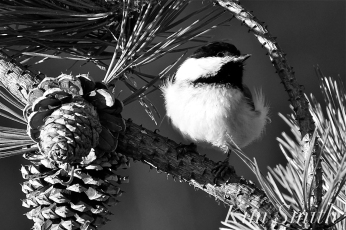 Tiny flakes falling through the trees, making that distinct pitapat sound of snowdrops landing on crisp frozen leaves below. But wait, the sun was shining and there wasn’t a cloud in the sky. An assembly of Redpolls overhead, hungrily teasing seeds from the tree’s cones were creating a shower of snow-seeds.

I followed along ever so quietly as the flock moved from tree to tree, expertly pulling the cones apart for the small kernel held within.

Returning several times to the same trail and hoping to catch sight again but, with most of the cones gone, so too were the Redpolls. 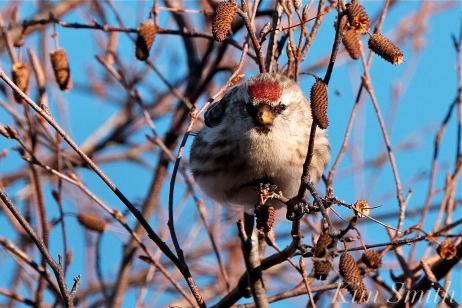 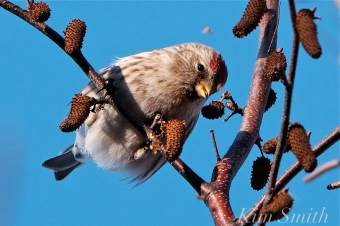 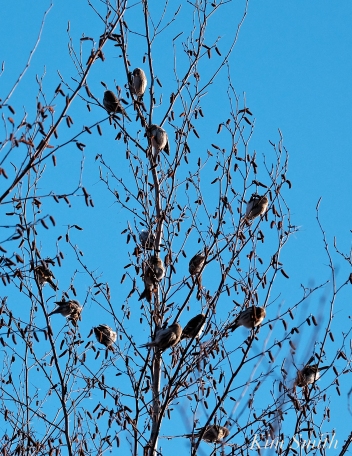 The Common Redpoll is a species of finch with a distinct crimson cap that looks like a mini French beret, giving the song bird a bit of a rakish appearance.

Their small yellow bills evolved to eat small seeds, such as those of thistles and birches. Some studies show that in winter Redpolls subsist almost entirely on birch seeds.

Common Redpolls have been known to survive temperatures of -65 degrees below and even sleep at night in snow tunnels that can be up to a foot long. Redpolls nest in the Arctic tundra; we only ever see them during the winter months.