“Sea Whip: Chorda Filum resembles a long whip which can be from 10 to 70 cm long and is very deep brown. it grows in a long strand from a disc holdfast. It looks much like rope or cord, and hence its name. It is found in the sublittoral area or often washed ashore after heavy wave action. It ranges from new Jersey to northern Labrador.” Sarah Fraser Robbins and Clairice Yentsch, the Sea is All About Us, 1973. Chorda filum was not present when I wrote about seaweed on Long Beach after the 2016 fall Storm Hermine.

What a dreamy, atmospheric and wide open beach this Easter morning. Prior high tide reached more than half way into post and rope refuge sites for the piping plovers, though plenty of stretches of dry sand moguls remained. The birds were foraging at the water’s edge. 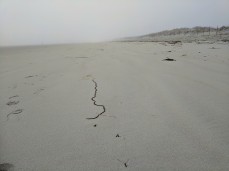