Discover a world of new, original picture books through art! Courtney Richardson shares Cape Ann Museum’s news for the Once Upon a Contest group exhibition  opening next week:

Once Upon a Contest: Selections from Cape Ann Reads

GLOUCESTER, Mass. (December 14, 2018) – The Cape Ann Museum is pleased to present Once Upon a Contest: Selections from Cape Ann Reads, a ground breaking show on view until February 24, 2019, stemming from the country’s first children’s picture book contest hosted by four public libraries. The exhibition brings special attention to award-winning local artists and writers and the art of children’s picture books. There will be an opening celebration on Saturday, January 5 from 3:00 – 5:00 p.m. This program is free for Museum members, Cape Ann Residents or with Museum admission.  For more information visit capeannmuseum.org or call 978-283-0455 x10.

Once Upon a Contest was drawn from manuscripts recognized for distinction during the Cape Ann Reads 2017 original picture book competition.  The special group show was organized and circulated by curator, Catherine Ryan, with support from the Bruce J Anderson Foundation | The Boston Fund.  Visitors will find picture books created by traditional author-illustrators (individuals who create both text and illustrations), friends and family pairings, repeat partnerships, volunteer match ups, self-taught and master artists, storytellers, published authors, and educators.

For a few, inclusion in this show will mark their debut display at a museum. The works on view range from preliminary mock ups and unfinished pages to final published illustrations for original books. They cover diverse themes and points of view and provide glimpses into stories and methodologies. The exhibition will include a reading nook for visitors of all ages.

During the first year of implementation, the collaborating public libraries and Cape Ann Museum offered innovative monthly programming and free picture book themed workshops for families and adults as a vehicle for family literacy, a work of art and literature, and a form of engagement and recreation. The vibrant endeavor culminated in a public art call, Cape Ann Creates for Cape Ann Reads. “What an opportunity for a talented individual or individuals to produce a lasting piece of literature with such special meaning,” exclaimed Deborah French, Director, T.O.H.P. Burnham Library, Essex.

Scores of Cape Ann creatives responded to this open call for a chance to win a first edition printing. In fact, so much interest occurred that a writer’s group led by Gloucester Writers Center was established, and volunteer artists and writers stepped up to help people without a partner. Two jury panels selected Gulliver, Honor and Medal books in the spring of 2017.

The jury panel included librarians, acclaimed children’s book author-illustrators and a rare books dealer: Carol Bender, Pat Lowery Collins, Ann Cowman, Kate Strong Stadt, Giles Laroche, Bob Ritchie, Justine Vitale, Anna Vojtech, and April Wanner. Five children served on the kids panel. A reception and book fair was held in Gloucester’s City Hall in January 2018 thanks to Mayor Sefatia Romeo-Theken. Original sculpture trophies of the bespectacled Cape Ann Reads mascot, “Gulliver”, by fine artist Jason Burroughs, were presented to the Honor and Medal book recipients. Cape Ann Reads continues to foster connections among the children’s picture book network, and generate business. Six books have been self-published, reviewed, and sold in local stores. Reflecting on this boon, Sara Collins, Director of the Manchester by the Sea Public Library said “Cape Ann Reads has been an innovative incubator for authors and illustrators, with the offspring as marvelous and varied as you can imagine in this creative community.”

Once Upon a Contest opens in December 2018 and continues until February 24, 2019. Following its launch at the Cape Ann Museum, the exhibition will tour the four communities of Cape Ann throughout 2019 as follows: Manchester in April, Essex in May-June, Gloucester in August-September, and Rockport in October-November.

In addition to the opening reception on Saturday, January 5, 2019

The Cape Ann Museum will offer weekly story time with Museum staff and guest readers on Wednesdays at 4:00 p.m. through March 31, 2019. On Saturday, January 12 from 10:00 a.m.  – 12:00 p.m. children and their families are invited to enjoy the special exhibition and participate in hands on art making and writing activities. This program is free and open to the public. 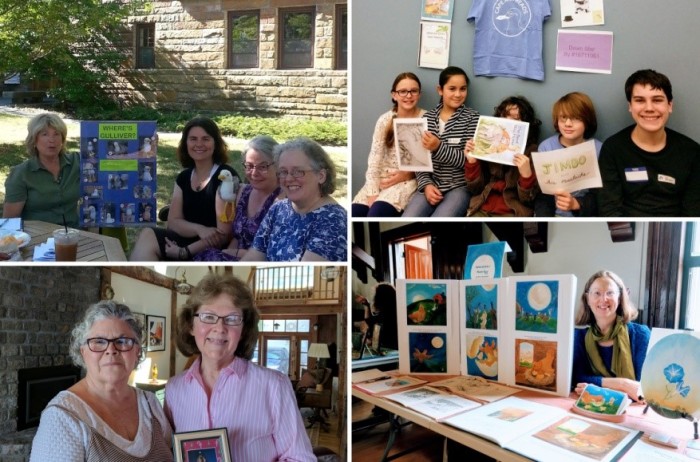 The lovely, clever header and flyer were designed by Meredith Anderson at Cape Museum. A printable version is available below the break – please print, post and share! 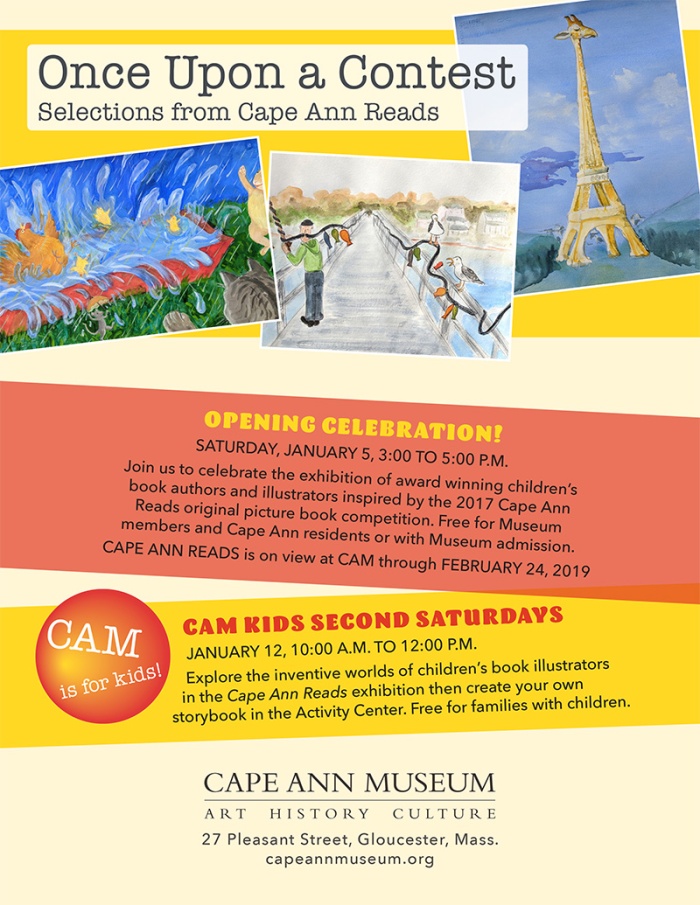 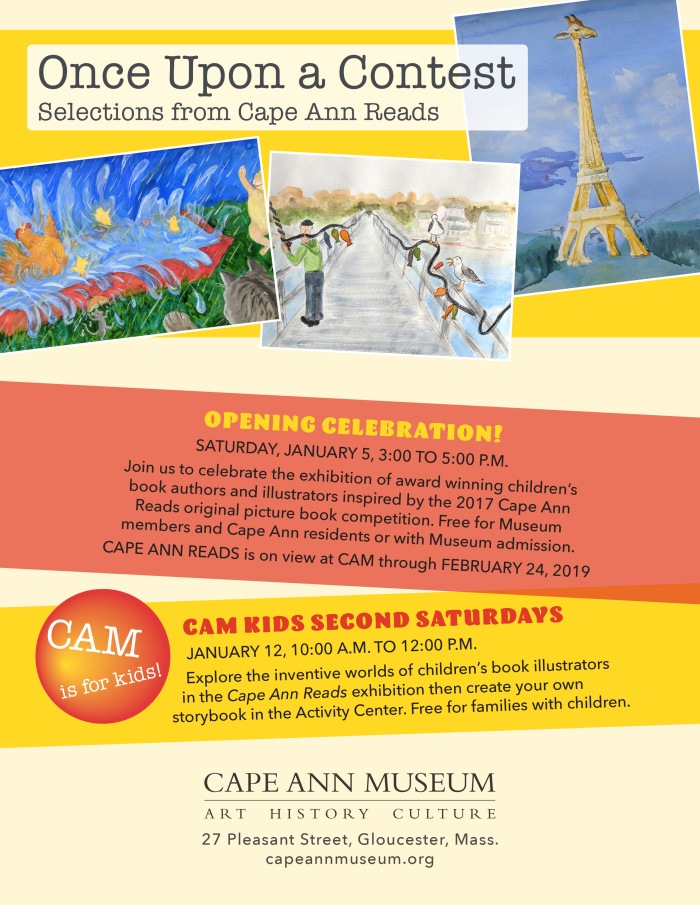 About the Cape Ann Museum

The Cape Ann Museum has been in existence since the 1870s, working to preserve and celebrate the history and culture of the area and to keep it relevant to today’s audiences. Spanning 44,000 square feet, the Museum is one of the major cultural institutions on Boston’s North Shore welcoming more than 25,000 local, national and international visitors each year to its exhibitions and programs. In addition to fine art, the Museum’s collections include decorative art, textiles, artifacts from the maritime and granite industries, two historic homes and a sculpture park in the heart of downtown Gloucester. Visit capeannmuseum.org for details. The Museum is located at 27 Pleasant Street in Gloucester. Hours are Tuesday through Saturday from 10:00 a.m. to 5:00 p.m., and Sundays from 1:00 p.m. to 4:00 p.m. Admission is $12.00 adults, $10.00 Cape Ann residents, seniors and students. Youth (under 18) and Museum members are free. For more information please call: (978)283-0455 x10. Additional information can be found online at http://www.capeannmuseum.org. For a detailed media fact sheet please visit www.capeannmuseum.org/press.